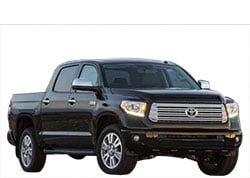 Should You Buy a 2016 Toyota Tundra 4WD? Here are the Pros and Cons

Some auto critics have often thought of the Toyota Tundra as being aimed at the wrong market or to be of the wrong size. However, it has gone on to receive much praise for its non-conformist approach towards the pickup truck scene. Initially sold to the US market in 1999 (for 2000 model year), the Tundra truck has been evolving, becoming bigger and more powerful during its three generations.

A notable change occurred for the 2015 model year when Toyota decided to drop the 270-hp V-6 engine Tundra option, leaving only the V-8s. The recipe for the 2016 Toyota Tundra 4WD won’t change much. Only a couple of minor feature and trim changes have been made for the new model year.

Some automotive critics have praised the optional V8 5.7-liter engine for its responsiveness and power.

The Tundra’s steering is light, perhaps even over-boosted, although that is becoming quite common today.

The handling capabilities of the Tundra have received praise from reviewers.The 4.6-liter V8 and 310-horsepower truck is adequate for all manner of lighter duties. The more powerful 5.7-liter V8 381-horsepower will handle almost any assigned task.

Test drivers have noted that the Tundra handles hills, water, and mud with ease.

The 2016 Tundra cabin is well built and attractive. Critics have noted that the higher trim interiors feature plenty of quality materials and have an upscale feel.When you are on the open highway, your cabin becomes surprisingly quiet.

In every trim, the front seats are comfortable and broad. It's however in the backseat where this vehicle enjoys space and comfort advantages not seen in most trucks.

Among the seat features are:

The majority of critics concur that throughout the 2016 Toyota Tundra 4WD you will get excellent storage for small-items.

In NHTSA tests, the 2016 Tundra has received 4 of the possible five stars for frontal and overall crash protection, and top stars regarding side protection.

Being a 2016 model, no data on vehicle reliability available yet, and neither has there been safety associated recalls.

At higher speeds, the new Tundra cannot be said to be particularly confidence-inspiring.

According to most test drivers, the 2016 Toyota Tundra 4WD delivers a rather stiff ride. For the Tundra to tow and haul as much as possible, the suspension has been stiffened such that passengers feel every single rut and bump.

According to auto reviewers, some of the controls require that you make an uncomfortable reach while some the interior hard plastics are rather disappointing. The aging interior and design cannot compete with modern rivals and critics argue that the 2016 Toyota Tundra 4WD design is somewhat outdated.

Although the upper-line trims come with automatic climate control for both passenger and driver temperature, the base models have repetitive-step push buttons. Reviewers have found these to be rather tedious when it comes to adjusting.

In the competitive world of quality full-size pickup trucks, it’s not always easy to break in, but the Tundra has managed to carve out a sizeable niche for itself. Only introduced in 2000 model year to the U.S., the Toyota Tundra has broken into a market that is hugely dominated by just a couple of big players and flourished.

Certainly, the 2016 Toyota Tundra 4WD may not have come close to challenging the bigger boys like the Ford F-150, Ram 1500 or even the Chevrolet Silverado when it comes to sales figures, but nonetheless, this 4WD truck has come to craft a loyal and strong following.The new 2016 Toyota Tundra continues to provide a comfortable driving experience, ample space and above all, terrific off-road abilities.