2016 Toyota Yaris Pros vs Cons. Should You Buy? 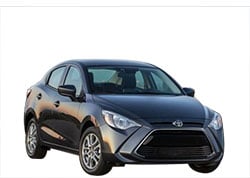 Should You Buy a 2016 Toyota Yaris? Here are the Pros and Cons

As gas prices began increasing in the late 1990s, Toyota looked for ways to appeal to shoppers who couldn't afford to spend a lot of money on gas. The company introduced the Yaris in 1999 as a subcompact car that performed as well as larger cars on the road. The current 2016 Toyota Yaris is the third generation of the Yaris and now comes in two different body styles: a standard sedan or a hatchback.

As Toyota last redesigned the body in 2013, shoppers will find that the new 2016 Toyota Yaris has the same body style from previous years. The subcompact car ranks highly regarding affordable new cars, affordable small cars and regarding all hatchbacks on the road. Toyota offers the fully loaded version of the Yaris for right around $18,000.

The Yaris now comes with either a manual or an automatic transmission, though the manual transmission is the standard version. It also comes in different trim options too. The L is the base model, but it's also available in an LE or SE model.

Shoppers love knowing that they can easily save at the pump with the new Yaris. It gets an amazing 37 mpg on the highway and when driving on open roads. It can also get around 30 mpg in the city.

Those looking to bring home a 2016 Toyota Yaris can now choose between a sedan or a hatchback model. The hatchback model has a slightly curved roof with a small cargo area in the rear. The sedan version has a little more headroom and more cargo space as well.

Citing complaints regarding past versions of the Yaris, Toyota worked hard to improve the ride of later models. It now comes with a durable suspension that reduces drag and does little to impact riders inside. The 2016 Toyota Yaris also handles smoothly on congested streets and in traffic.

Though the 2016 Toyota Yaris is one of the more affordable cars that Toyota makes, its interior has a premium and even luxurious look. Shoppers love the great combination of fabric and other materials used inside that makes it look like it costs more than it does. The Yaris also has lots of space for passengers in the backseat.

Many shoppers will find themselves surprised at the number of technology features that come standard on the 2016 Toyota Yaris. It comes with a touchscreen display that measures 6.1 inches, a port for plugging in USB devices and has voice recognition controls. Car shoppers can spend extra for a new navigational system and other additional tech features.

The National Highway Traffic Safety Administration gave the 2016 Toyota Yaris high marks all the way across the board. It scored a four-star rating regarding rollovers and frontal crashes. The organization also gave it five stars for general safety performance and side crashes.

All Toyota vehicles now come with electronic controls designed to increase the safety of those on the road. The Yaris comes with stability control that kicks in to keep the subcompact car from rolling over or sliding off the road. Its traction control helps keep the tires locked on the road and keeps the tires from spinning on wet or slick surfaces.

Despite its small size, the Yaris comes fully equipped with air bags that deploy to protect drivers and any others in the car during a crash. A driver's air bag comes out from the steering wheel, but there are also air bags located along the sides at both the head and body level. The air bags can automatically sense where there are people in the vehicle too.

Since its early days, Toyota wanted the Yaris to come in at a lower price that any shoppers could afford. The 2016 Toyota Yaris now has a manufacturer's suggested retail price of less than $15,000 for the basic model, but even the higher end models still have an affordable price. Most shoppers will find that they can get a fully loaded Yaris for around $18,000 or less.
Buying Tip: To avoid overpaying on a new car, shop prices online first. Get up front pricing before you walk into a dealership. We recommend the following free services; Car Clearance Deals,   Edmunds,   CarsDirect,   NADAguides  &  Motortrend. These free services will offer you the lowest prices and supply you with multiple competing price quotes. You will know the best price before you visit the dealer.

While the 2016 Yaris has a glove box and storage pockets on its doors, it doesn't have much storage in its trunk. The lack of space may make it unappealing to some shoppers. Those shoppers should keep in mind that it has a roomier backseat to make up for its limited cargo space.

Many new cars come with an adjustable or telescoping steering wheel. This lets drivers pull the steering wheel out and adjust it to better fit their bodies. The new Yaris has a standard steering wheel that does not come out from the dash.

Though the Toyota Yaris comes in multiple trim packages, all models come with the same engine. This is a 1.5L engine that is available with a five-speed manual transmission or a five-speed automatic transmission. Some may prefer something more powerful that accelerates faster.

There are very few subcompact cars available today because many manufacturers now focus on larger vehicles. The biggest competitor to the 2016 Toyota Yaris is probably the Ford Fiesta, but some compare the Yaris to the Chevrolet Sonic as well. Though all come in at around the same price, the Yaris comes loaded with more safety features and gets slightly better fuel mileage too.