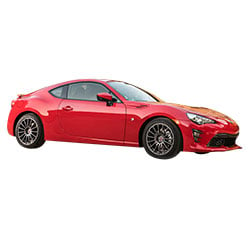 Should You Buy a 2017 Toyota 86? Here Are Some Reasons For and Against

Previously known as the Scion FR-S, the 2017 Toyota 86 remains one of the hottest sports cars on the market. Drivers will certainly appreciate its affordability and buttery smooth handling. Because of the Toyota 86’s strong fuel economy, it proves to be a worthy daily-driver.

The latest 86 benefits from a few key improvements. New front and rear bumpers help give it a more powerful road presence. Toyota also tweaked the 2017 86 to pump out slightly more power. One of the biggest changes is the 2017 model's improved suspension. It now offers a better balance of handling and ride comfort.

The coupe’s sharp handling enables it to compete with some of today’s best sports cars. When driving the new 86, you will always have a direct connection to the road. Drivers from across the globe have raved about the car’s ability to hug the pavement. While most FR-S owners will never hit the track, the car has a racing pedigree.

If you are looking for a world-class performer that doesn’t break the bank, very few sports cars rival the 2017 Toyota 86. Expect to pay around $26,200 for the base model. Meanwhile, a fully loaded 2017 86 tops out at $27,500. From a performance standpoint, this proves to be one of the best deals on the entire car market.

4. Perfect Power for Most People

Not everyone needs to be behind the wheel of a 500-horsepower sports car. With a total output of 205 horsepower and 156 pound-feet of torque, the 2017 Toyota 86 offers more than enough performance for the average driver. Because the car’s power isn't intimidating, even first-time sports car owners can have fun.

The new 86 definitely packs a lot of style. Its updated front fascia gives it an even sleeker profile than before. A dual-outlet exhaust and LED lighting come standard. Not only do the standard 17-inch wheels look cool, but they also help lower the car’s curb weight. Some of the attention-grabbing paint colors include Hot Lava, Ablaze, and Oceanic.

Most modern drivers prefer an automatic transmission. However, a lot of sports car enthusiasts love the excitement of changing gears. The car's close-ratio manual gearbox promises to keep you entertained on a daily basis. The manual Toyota 86 is also a bit quicker than the automatic version. It recorded a competitive 0-60 time of 6.2 seconds.

Although the 2017 Toyota 86 is a small sports coupe, it is more accommodating than some people may think. While sitting in the driver's seat, you will have plenty of room. It is a great choice for tall drivers. The coupe’s wide and supportive seats promise to keep you comfortable even on long road trips.

There are more powerful cars on the market. Nevertheless, the new 86 still has the ability to keep a smile on the driver’s face. Its lightweight design makes it extremely easy to toss around on the track. When equipped with Toyota’s TRD exhaust system, the 2017 Toyota 86 has an extra fun factor. The coupe is also just quick enough for most people.

While driving the new 2017 Toyota 86, you will be surrounded by a lot of nice features. The eight-speaker sound system promises to make your daily commute more entertaining. Meanwhile, the standard rear-view camera helps you to dodge parking lot obstacles. Some of the other equipment includes a 7.0-inch touch-screen display, a USB interface, and Bluetooth technology.

10. Easy and Cheap to Maintain

Toyota 86 owners won’t have to spend a fortune on maintenance. You don’t have to worry about expensive problems such as failed turbocharger. The car’s low cost of ownership is a big advantage for the drivers who don’t have a lot of extra funds.

The 2017 Toyota 86 is not a speedster. While it is quicker than the typical commuter car, it can't match the straight-line acceleration of a high-powered sports car. Some car shoppers may desire a more potent engine. Toyota focused more on making it one of the best-handling cars in any price range.

The car comes standard with a rear-view camera. However, Toyota does not offer any high-tech driving aids for the 2017 model. Safety innovations, such as blind-spot detection and lane departure warning, are not available.

While you will have ample room in the front, the rear seat is only acceptable for small children. The coupe is obviously not designed to be a family vehicle. This could be a key concern for some parents.

This fun coupe stands out in a lot of important categories. It is stylish, fun, and affordable. Although it does not come equipped with a monstrous engine, the car's superb handling and sleek styling will impress any driver.