2017 Toyota Highlander Pros vs Cons. Should You Buy? 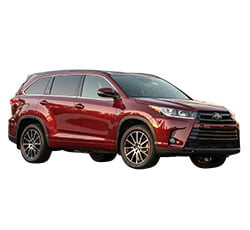 Should You Buy a 2017 Toyota Highlander? Here Are Some Reasons For and Against

When shopping for a new three-row SUV, be sure to put the 2017 Toyota Highlander on your list. The Highlander’s family-friendly cabin and impressive safety scores make it an outstanding choice. Furthermore, it is now more stylish than ever before.

This year, the Toyota Highlander benefits from a new eight-speed transmission. Toyota also decided to update the SUV’s appearance. To make the new Highlander even more appealing, it has been equipped with more standard safety technologies.

The SUV’s new V-6 engine boosts its performance. With a total output of 295 horsepower and 263 foot-pounds of torque, the engine feels very strong in real-world driving conditions. When carrying around multiple passengers, the extra muscle under the hood will surely come in handy. A 5,000-pound towing capacity also makes the V-6 Toyota Highlander a good option for pulling a trailer.

If you are concerned about getting the best fuel economy, look at the 2017 Highlander Hybrid. It can deliver a combined 29 mpg. Fortunately, you won’t have to sacrifice any performance in order to obtain the extra gas mileage. A direct-injected fuel system helps the hybrid engine develop plenty of passing power.

The 2017 Highlander comes standard with a front-wheel-drive system. However, some drivers will need the optional AWD package. When equipped with all-wheel drive, the SUV becomes a family vehicle that you can drive throughout the winter. In the event that the AWD system detects slippery road conditions, it will automatically seek to improve traction.

The new eight-speed automatic transmission is a gem. Not only is it more responsive than the previous transmission, but it also shifts smoother. When attempting to pass a vehicle on the highway, the transmission quickly downshifts to a lower gear. It certainly makes the Highlander more enjoyable to drive on an everyday basis.

For the 2017 model year, Toyota updated the Highlander’s front fascia. It looks much sportier than the outgoing version. LED taillights now come standard. A platinum-colored grill and a stunning set of wheels further enhance the upscale Limited model’s appearance. Some of the signature paint colors include toasted walnut, salsa red, and celestial silver.

6. Seats Up to Eight People

Large families will love this SUV’s spacious design. Reclining second-row seats enable your friends to kick back and relax on long road trips. Tall drivers will also be able to enjoy hours of comfort on the road. If you aren’t using the third-row seat, it can be folded to expand the available storage space.

With a MSRP of $30,490, the base 2017 Highlander LE proves to be an attractive deal. A touch-screen audio system makes your music-listening experience very fulfilling. Some of the other standard items include a rear-view camera, Bluetooth technology, and a whopping five USB ports.

Aside from the SUV’s excellent amount of impact protection, it also offers an array of advanced driving aids. Unlike most of its competition, the 2017 Toyota Highlander comes standard with automatic braking technology and pedestrian detection. Adaptive cruise control and lane departure warning also come standard. Meanwhile, an optional 360-degree camera provides you with enhanced outward visibility.

There are plenty of options available for the 2017 Toyota Highlander. A power tailgate comes in handy when loading items into the back. Meanwhile, the DVD entertainment system will help keep impatient children satisfied. Some of the other worthy upgrades include an amplified JBL sound system, a panoramic sunroof, and ventilated front seats.

The new Toyota Highlander SE is perfect for the individuals who desire a sportier driving experience. It comes equipped with a stiffer suspension system, which promotes better handling on the road. A set of performance tires also come standard on the SE model.

Reasons Not to Buy a 2017 Toyota Highlander – The Cons

When equipped with the base four-cylinder engine, the SUV is not nearly as powerful. It will likely struggle to pull a loaded trailer and climbing steep mountains. Furthermore, the four-cylinder does not deliver better gas mileage than the V-6 engine.

Don't expect the third-row seat to offer a great deal of space. While small children will fit comfortably, adults will begin to feel cramped on long journeys. Some of today's minivans and full-size SUVs provide a bit more legroom for your third-row passengers.

The 2017 Toyota Highlander is not engineered to handle the extremely rough terrain. While it will perform well on a basic dirt trail, drivers shouldn't attempt to take the SUV on a hardcore adventure. Because of its lack of undercarriage protection, components can easily become damaged by rocks and tree stumps.

Toyota did an exceptional job of improving its popular three-row SUV. The 2017 model's edgier styling and abundance of safety technologies should intrigue plenty of car shoppers. The 2017 Toyota Highlander also offers a new SE trim, which rewards you with a sportier driving experience.