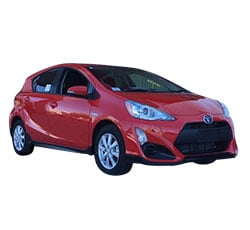 Should You Buy a 2017 Toyota Prius c? Here Are Some Reasons For and Against

Drivers from across the country recognize the Toyota Prius as one of today’s most efficient cars. The Prius c is currently the smallest member of the Prius family. Toyota designed the Prius c specifically for the drivers who do a great deal of city driving. However, it is still roomy enough to haul a family around. Furthermore, even the base model comes loaded with popular features.

All Prius c trims now come standard with the previously optional Toyota Safety Sense package. No other notable changes were made to the 2017 Toyota Prius c.

The hybrid’s outstanding fuel economy is clearly one of its main attractions. You will be able to travel for hundreds of miles before needing to refuel. According to the EPA, the 2017 Toyota Prius will return more than 45 mpg. A continuous variable transmission and an active grille shutter enhance the car’s overall efficiency.

Toyota has a long history of developing extremely dependable vehicles. You can expect the 2017 Toyota Prius c to offer bulletproof reliability. In fact, it has one of the highest reliability ratings on the market. This is a testament to the hybrid’s outstanding build quality. All of the major components are engineered to withstand the test of time.

While behind the wheel of 2017 Toyota Prius c, you will grow to appreciate its nimble handling. It is arguably the most fun-to-drive version of the Prius. You will love zipping around town in this eco-friendly hatchback. Although the Prius c will never be mistaken for a sports car, it does give drivers an extra sense of control.

The Toyota Prius c looks quite sporty. Stylish LED headlamps help keep it from getting lost in the crowd. A lot of people also like the car’s unique taillight design. When equipped with the optional 17-inch alloy wheels, the Prius c looks even more appetizing. Some of the fun paint colors include Blue Streak, Absolutely Red, and Tangerine Splash.

On the inside, the 2017 Toyota Prius c provides enough room for a family of five. Everyone will be able to travel in comfort. Despite the hatchback’s small size, it still provides ample legroom for your backseat passengers. With more than 17 cubic feet of cargo space in the hatch, drivers will also be able to pack a lot of extra stuff. A lift-back design makes it easy for you to load items.

If you decide to get a 2017 Toyota Prius, you will be doing your part to help protect the environment. Aside from its world-class fuel economy, the Prius c is also a low-emission vehicle. Drivers can enjoy their daily commute without compromising the atmosphere.

If you appreciate creativity, you are destined to like the new Prius c. Its customizable gauge cluster is located in the center of the dashboard, which gives the interior a futuristic appearance. Meanwhile, a sporty gear shifter accentuates the cabin’s modern theme. The entire interior layout looks remarkably stylish. Upgraded upholstery gives the top-of-the-line Four model a more upscale appearance.

Don’t overlook the base Prius c One. It has an attractive starting price of $20,150. Every new Prius c comes with a 60,000-mile powertrain warranty. Some of the standard features include Toyota’s impressive Entune™ infotainment system, a 6.1-inch touch screen, and Bluetooth technology.

When equipped with the upgraded sound system and satellite radio, the Prius c becomes a more entertaining car for younger drivers. Navigation will benefit the folks who plan to travel outside of their local area. Smartphone app integration is yet another popular upgrade.

When evaluated by the IIHS, the 2017 Toyota Prius c proved to offer good crash protection. By making the Safety Sense package a standard feature, Toyota was able to give the Prius c a key advantage over the competition. You will now benefit from lane departure prevention, automatic high beams, and automatic braking technology. Meanwhile, a rear-view camera comes equipped on the range-topping Four model.

Don’t expect to be blown away by the Prius c’s performance. While it can easily keep up with the surrounding traffic, the Prius c is definitely not a speedster. It clocked a so-so 0-60 time of 10.9 seconds. If quickness is a key concern, you may want to consider the Ford Fiesta.

The 2017 Prius c’s ride can become a bit stiff on certain types of pavement. This may pose a concern for the drivers who a lot of long-distance traveling.

In order to obtain a backup camera, you will need to step up to the top-of-the-line Four model. Unfortunately, you will be forced to spend more money. Keep in mind that the top trim is roughly $5,000 more expensive than the base Prius c.

If you live in an urban area or simply desire a fuel-efficient commuter car, the 2017 Toyota Prius c deserves some serious consideration. Its roomy design and standard safety technologies will also appeal to a lot of drivers. Even the fully loaded Four model proves to be a solid deal.