2017 Toyota Prius Pros vs Cons. Should You Buy? 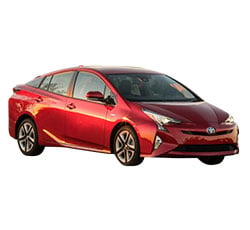 Should You Buy a 2017 Toyota Prius? Here Are Some Reasons For and Against

When it comes to fuel economy, the 2017 Toyota Prius is hard to beat in many aspects. However, the legendary hybrid is more than just a gas-sipper. It also provides an extremely comfortable cruising experience and outstanding crash protection features. There are plenty of people who will adore its imaginative styling. Furthermore, an abundance of cargo space makes Toyota’s eco-friendly hatchback a versatile commuter vehicle.

For the 2017 model year, the new Toyota Prius remains the same. All of the most significant changes occurred last year.

For years, the Toyota Prius has remained one of the world’s most fuel-efficient automobiles. The new model continues to reward drivers with unbeatable fuel savings. It is rated to return a spectacular 54 mpg in town and 50 mpg on the highway. However, the Two Eco model delivers a combined 56 mpg. Some owners have reported even better real-world fuel efficiency.

Very few modern vehicles are more reliable than the Toyota Prius. Even after racking up a lot miles, it will still perform like a new vehicle. Based on feedback from current and previous owners, the car is unlikely to experience any serious issues. A 100,000-mile warranty comes with the hybrid battery, which gives buyers an extra sense of protection.

Unlike the first-generation Prius, the new model has an attention-grabbing appearance. A sporty grille, along with edgy headlights, help it to stand out on the road. LED running lights also come standard. Featuring 17-inch alloy wheels and a special rear spoiler, the Four model has a sporty profile. Several contemporary paint colors are available, including Hypersonic Red and Blue Crush.

The 2017 Toyota Prius is extremely easy to drive. Its continuous variable transmission is quiet and responsive. Although there are sportier hatchbacks on the market, it still feels very stable in a highway or city setting alike. The suspension system helps keep the car balanced when making quick lane changes. Several test drivers have also praised the hybrid for its pleasurable riding quality.

When evaluated at the government’s crash test facility, the 2017 Prius was able to earn a five-star safety rating. It is also recognized as a Top Safety Pick+ by the IIHS. While a backup camera comes standard, you can also opt for the Toyota Safety Sense package. It comes with adaptive cruise control, Lane-Departure intervention, and forward collision alert.

One should expect to pay about $24,500 for a standard Toyota Prius. When considering the car’s impressive list of standard features, it proves to be a solid value. Drivers will like the 6.1-inch touch-screen display. Some of the other equipment includes Bluetooth technology, a dual-screen gauge cluster, and a USB port. LED headlamps make it even more tempting of a buy.

Toyota’s upgraded Entune infotainment system has received high marks for its easy-to-use interface. You will also appreciate the touch-screen display’s responsiveness. The system can provide real-time data such as sports scores and the latest weather forecast. Drivers can quickly choose from an impressive list of apps, including Pandora and Yelp.

If the base 2017 Toyota Prius is not luxurious enough for you, step up to one of the higher trim levels. While on the road, a wireless charging pad enables you to keep your phone full of juice. The available heated seats are a must for the drivers who commute during the winter time. Meanwhile, a head-up display assists drivers in keeping their eyes above the steering wheel.

9. Great for the Environment

If you are the type of person who strives to live a green lifestyle, the 2017 Toyota Prius is an ideal choice. Its outstanding fuel economy enables one to travel without being a major detriment to the environment. Various upgrades, such as an ultra-lightweight battery and low-rolling-resistance tires, help enhance the Prius Two Eco's efficiency.

Although the 2017 Prius is not as spacious as some vehicles, it still provides enough room for most families. The seats provide an impressive level of comfort with more than 24 cubic feet of space in the hatchback’s cargo area. Everyone will enjoy the car's plush ride and quiet cabin.

Don't expect the 2017 Prius to win many drag races. Although it has decent passing power, the hatchback is not quick. When accelerating from a standstill, it takes about 9.8 seconds for the Prius to reach 60 mph.

The previous generation of the Prius was noted for its exceptionally roomy backseat. Unfortunately, the 2017 model is not as spacious. In fact, your rear-seat passengers will have roughly 2.5 inches less legroom. This could be a concern for the drivers who have very tall family members.

Not everyone will like the hatchback's styling. Some people may find its new design to be a bit over the top. The rear-end's styling has been the source of much controversy. On the other hand, there are others who adore its unique appearance.

The eco-friendly hatchback's most attractive quality remains its great fuel economy. With the today's gas prices being so unpredictable, the 2017 Toyota Prius becomes even more appealing. However, you will also come to appreciate the car's proven reliability and comfortable riding experience. The fully-loaded Four Touring model comes loaded with numerous premium features.