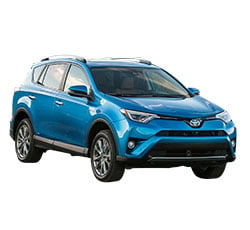 Should You Buy a 2017 Toyota Rav4 Hybrid? Here Are Some Reasons For and Against

Engineered to deliver above-average fuel economy, the 2017 Toyota RAV4 Hybrid proves to be an outstanding family vehicle. Drivers will like the small crossover’s roomy design and impressive level of passenger comfort. Every version of the RAV4 Hybrid comes standard with all-wheel drive, which gives you the maximum traction in all weather conditions.

The 2017 Toyota RAV4 Hybrid now comes standard with an additional number of advanced safety technologies. Everything else remains the same.

Very few family-sized SUVs can match the RAV4 Hybrid’s overall fuel efficiency. The combination of Toyota’s Synergy Drive system and a CVT automatic transmission helps conserve fuel. In terms of gas mileage, you can look forward to getting an eco-friendly 34 mpg in the city and 30 mpg on the highway. Luckily, Toyota tuned the crossover to use regular unleaded fuel.

The 2017 Toyota RAV4 Hybrid is actually more powerful than the conventional RAV4. Its hybrid four-cylinder engine develops an impressive 194 horsepower. The extra torque makes the crossover feel extremely responsive on the road. A brisk 0-60 time of 7.9 seconds proves that the RAV4 Hybrid can accelerate quickly. You can easily surge past a slow-moving vehicle on the freeway.

While driving the 2017 Toyota RAV4 Hybrid, you will appreciate its composed handling. It tackles curvy roads far better than a large SUV. The RAV4 Hybrid’s nimbleness is a major plus for the drivers who commute on an everyday basis. Your family will also enjoy the crossover’s polished ride. Its suspension system is able to keep the ride smooth on most road surfaces.

Drivers can take full advantage of the RAV4 Hybrid’s standard AWD-i system. It enhances traction without lowering the crossover’s fuel economy. Toyota designed the system to automatically detect slippery road conditions. You will have an extra peace of mind when traveling on a rainy day. Of course, the extra traction will surely come in handy during the winter time.

There are a lot of styling similarities between the RAV4 Hybrid and the conventional version. A sharp-looking front fascia helps give the crossover a modern appearance. Featuring a stylish set of 18-inch alloy wheels and full LED lighting, the mid-level SE model is sure to catch your attention. Some of the most attractive paint colors include Electric Storm Blue, Galactic Aqua, and Magnetic Gray.

Up to five people can climb aboard the 2017 Toyota RAV4 Hybrid. All of your passengers should have ample legroom. When taking a long road trip, your family can recline their seat to experience an especially relaxing ride. An available power driver seat enables you to easily obtain a comfortable driving position. Although the hybrid battery pack takes up some cargo space, there is still plenty of room for most items.

Toyota is noted for its ability to produce dependable vehicles. The 2017 Toyota RAV4 Hybrid should continue that tradition. Although the RAV4 Hybrid has not been on the market for a long time, keep in mind that Toyota hybrids such as the Prius are known for their trouble-free performance. A 100,000-mile warranty covers the hybrid battery.

The base XLE model costs around $29,300, which is a good deal for a hybrid crossover. Remember, even the base RAV4 Hybrid now features several high-tech safety features. Some of the other standard equipment includes an Entune™ infotainment system, Bluetooth technology, and satellite radio.

If you aren’t satisfied with the base model, plenty of upgrades are found on the higher trim levels. Blind-spot monitoring will give you more security when switching lanes. Meanwhile, the bass-pumping JBL sound system will surely intrigue a lot of music fans. A Bird’s Eye parking camera is available as well.
Buying Tip: To avoid overpaying on a new car, shop prices online first. Get up front pricing before you walk into a dealership. We recommend the following free services; Car Clearance Deals, NADAguides, CarsDirect & Motortrend.
These free services will offer you the lowest prices and supply you with multiple competing price quotes. You will know the best price before you visit the dealer.

1. Not a Rugged Crossover

Although the RAV4 Hybrid comes standard with all-wheel drive, it is still not the most capable off-road vehicle. While traveling on an even dirt road will pose no problems, drivers should avoid tackling serious terrain. If you need a rugged crossover, take a look at the Jeep Cherokee Trailhawk.

It will take a while for some drivers to become accustomed to the crossover’s regenerative braking system. It does not feel like a traditional braking system. Drivers must learn how to apply the correct amount of pressure on the brake pedal.

Some of your family members will find the RAV4 Hybrid’s backseat to be a bit too narrow. A wider rear seat would make it an even better family hauler.

Some of the main competitors include the Subaru Crosstrek and the Honda CR-V. In regards to fuel efficiency, the 2017 Toyota RAV4 Hybrid easily outshines these conventional crossovers. It also offers a much stronger performance than the Subaru Crosstrek. Furthermore, car shoppers will appreciate the RAV4 Hybrid’s greater number of standard safety innovations.

It comes as no surprise that the 2017 Toyota RAV4 Hybrid is recommended by automotive journalists from across the country. The small crossover offers above-average fuel economy while still delivering a peppy performance. Every family will appreciate the RAV4 Hybrid’s spacious design. Although the top-of-the-line Limited model is nice, the less expensive SE model is almost as luxurious.