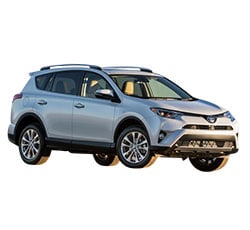 Should You Buy a 2017 Toyota RAV4? Here Are Some Reasons For and Against

The Toyota RAV4 is one of the best-selling small SUVs on the market. It now looks more aggressive than ever before. You can also expect the popular SUV to offer excellent crash protection and a comfy ride. Like so many other Toyota vehicles, the RAV4 has a history of being extremely reliable. There is also plenty of space in its backseat.

For the 2017 model year, the Toyota RAV4 comes standard with significantly more advanced safety technologies. Toyota also introduces a new Platinum trim, which is now the most luxurious version of the SUV.

1. Better on Gas than a Midsize SUV

If you are not satisfied with the fuel economy of a large SUV, the 2017 RAV4 will prove to be a more economical option. It is rated to return a respectable 22 mpg in the city and 29 mpg on the highway. Fortunately, the all-wheel-drive models are nearly just as efficient.

To overcome snowy road conditions, some drivers will need the crossover's optional AWD system. The additional traction makes the 2017 RAV4 a reliable winter vehicle. When traveling on slippery pavement, the AWD system can automatically detect a spinning wheel. The SUV’s extra ground clearance gives it a key advantage over most AWD sedans.

While behind the wheel, the 2017 RAV4 will inspire you with lots of confidence. You will appreciate the RAV4’s responsiveness when making quick maneuvers on the road. Unlike a truck-based SUV, it drives more like a small sedan. Although a performance-tuned suspension is no longer offered, most drivers will be satisfied with the SUV’s level of sportiness.

The 2017 Toyota RAV4 is more than worthy of a cross-country road trip. Its suspension system helps keep road vibrations to a minimum. Because of the SUV’s outstanding ride quality, it proves to be a good alternative to a more expensive European model. Your family will also benefit from the crossover’s quiet cabin. Toyota did a great job of insulating the cabin.

For years, the RAV4 has been known for its reliability. According to the past and current owners, the SUV’s powertrain offers outstanding long-term durability. It is a vehicle that you can depend upon on an everyday basis. You can also expect its well-constructed interior to withstand the test of time. Unsurprisingly, the RAV4 has a higher than average resale value.

Although the SUV’s engine is not brutally powerful, it does have enough pep to keep most people fulfilled. Inexperienced drivers will not feel intimated by its performance. However, you will have no trouble when attempting to merge onto the freeway. The engine pumps out a reasonable 176 horsepower and 172 pound-feet of torque.

At one point, the Toyota RAV4 only had a basic appearance. Fortunately, that is no longer the case. The SUV’s sharp body lines and sporty front fascia will appeal to many drivers. Featuring LED running lights and a cool-looking set of 18-inch wheels, the Limited model should attract much interest. Several attractive colors are offered, including Electric Storm and Barcelona Red.

The base 2017 Toyota RAV4 is a true bang for the buck. It has an attractive MSRP of $26,500. Keep in mind that you will be receiving a lot of great features. Toyota’s Entune infotainment has received high marks for its user-friendly design. Some of the other standard items include Bluetooth technology, a rear-view camera, and a six-speaker sound system.

Aside from its five-star safety rating, the new 2017 Toyota RAV4 now comes equipped with more safety innovations. The standard automatic braking system certainly provides drivers with an extra degree of protection. Meanwhile, Lane Keep Assist helps prevent you from crossing over the line. You can also obtain blind-spot monitoring and rear cross-traffic alert.

If you are accustomed to driving in a busy city, you can benefit from the SUV’s optional parking aids. The front and rear parking sensors will help prevent fender benders. The SUV also offers a 360-degree camera system, which provides an unobstructed view of your surroundings.

Only one power source is available for the 2017 model. Some drivers may desire a stronger engine. Rivals, such as the Ford Escape and the Jeep Cherokee, offer a more effective measure of performance.

While the 2017 Toyota RAV4 will perform well in wintry weather, it is not able to handle extremely rugged environments. The SUV's street tires and car-like chassis cannot withstand the extra stress. If you decide to travel off-road, do not even attempt to tackle any rough terrain.

Don't expect the 2017 Toyota RAV4 to be a strong towing machine. In fact, it is only rated to tow up to 1,500 pounds. This could be a factor for the drivers who need to pull a trailer on a regular basis.

Based on its history of being a top-seller, the 2017 Toyota RAV4 is destined to remain a popular ride. Its reliability and comfortable interior should appeal to plenty of car shoppers. Furthermore, it now comes standard with some exclusive safety technologies. Upgrades, such the booming JBL sound system and a power tailgate, make it especially tempting.