2017 Toyota Sequoia Pros vs Cons. Should You Buy? 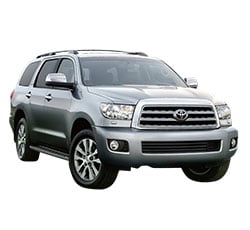 Should You Buy a 2017 Toyota Sequoia? Here Are Some Reasons For and Against

For the drivers who are in the market for a full-size SUV, the 2017 Toyota Sequoia remains a viable option. A remarkably spacious cabin and a high towing capacity make it a strong contender. If you love to travel off-road, the Sequoia’s rugged design will enable you to overcome rough terrain. Even the base model proves to be a comfortable highway cruiser.

Toyota did not make any notable changes to the new Sequoia.

The standard V-8 engine is a legitimate brute. It pumps out an impressive 381 horsepower and 401 pound-feet of torque. A six-speed automatic transmission comes standard as well. Whether you are charging up a mountain road or coasting along the interstate, you will always have plenty of power on tap. The big SUV is also surprisingly quick.

If you don’t own a pickup truck, the 2017 Toyota Sequoia will prove to be a great substitute. A beefy frame makes the Sequoia extremely sturdy. It has an impressive towing capacity of 7,400 pounds. The Sequoia’s towing capabilities will certainly benefit the drivers who need to pull a camper or a pair of ATVs.

Adventurous families will love the Sequoia. It is a great vehicle for going camping. When traveling on a mud-soaked trail, the SUV’s multi-mode 4WD system enables you to keep moving without any trouble. If you happen to experience a loss of traction, activate the system’s locking center differential to avoid becoming stuck. Furthermore, there is 10 inches of ground clearance under the SUV.

Don’t allow the Sequoia’s large size to intimidate you. It is a very easy SUV to drive. The Sequoia’s light steering and high seating position make drivers feel in command. When accelerating past a slow-moving vehicle, the six-speed automatic transmission immediately shifts down to a lower gear. You will like taking long cruises on the highway.

Your family can look forward to experiencing the Sequoia’s relaxing ride. Only large potholes seem to disrupt the SUV’s pleasing ride quality. An adaptive air suspension comes standard on the luxurious Platinum model. Car reviewers have also given the 2017 Toyota Sequoia excellent marks for its seat comfort. You will be able to remain cozy and relaxed throughout the day.

Unlike a modern crossover, the Toyota Sequoia looks like a traditional SUV. Its truck-like front fascia and muscular stance will appeal to a lot of people. Featuring a more stylish set of 20-inch alloy wheels and a color-keyed bumper, the Sport package gives the base Sequoia a stronger road presence. Some of the available exterior colors include Sizzling Crimson Red, Magnetic Gray, and Sandy Beach.

When equipped with a second-row bench seat, the Sequoia can accommodate up to eight people. Grab bars and running boards enable everyone to easily climb aboard. By folding down the rear seats, you can dramatically expand the available storage space. With a maximum cargo capacity of 120 cubic feet, the Sequoia can be used to transport extra stuff such as film equipment and camping gear.

Expect to pay around $45,000 for a base 2017 Toyota Sequoia. It comes loaded with several useful features. A standard backup camera makes it easier to park the big bruiser. Meanwhile, the eight-speaker audio system provides enough sound for most people. You will also like the Entune™ infotainment system, which is remarkably simple to use.

The Platinum model is the only trim that features a load-leveling rear suspension. You will also be surrounded by several upgrades. When taking a vacation, kids will enjoy the Blu-ray entertainment system. Ventilated seats provide enhanced comfort on hot days. Some of the other goodies include an amplified JBL sound system and a power tailgate.

When equipped with blind-spot monitoring, the 2017 Toyota Sequoia gives drivers a greater sense of awareness on the highway. The system does a great job of detecting oncoming vehicles. You will be able to switch lanes with more assurance. Drivers will especially appreciate the blind-spot monitor when carrying a full load of passengers.
Buying Tip: To avoid overpaying on a new car, shop prices online first. Get up front pricing before you walk into a dealership. We recommend the following free services; Car Clearance Deals, NADAguides, CarsDirect & Motortrend.
These free services will offer you the lowest prices and supply you with multiple competing price quotes. You will know the best price before you visit the dealer.

Reasons Not to Buy a 2017 Toyota Sequoia – The Cons

You can expect the 2017 Toyota Sequoia to consume a lot of fuel. According to the EPA, the Sequoia will return a dismal 13 mpg in the city and 17 mpg on the interstate. Of course, you will likely experience even worse fuel economy when towing a hefty load. Some of the Sequoia’s competitors are easier on gas.

To no surprise, the Sequoia is not the sportiest SUV on market. Its sheer size poses a problem when taking a sharp curve. In terms of overall handling, the Sequoia lags behind the competition.

A loaded Platinum model will cost more than $62,000. All-wheel drive tacks on an additional $3,000. This may be a bit too much money for the average car shopper.

Some of the Sequoia’s main rivals include the Chevrolet Tahoe and the Nissan Armada. The Sequoia offers more cargo space than both of these full-size SUVs. In terms of long-term durability, the Sequoia is hard to beat.

The 2017 Toyota Sequoia remains a good option for the drivers who need a strong workhorse that provides lots of passenger room. Although the Sequoia is not great on gas, it is still a worthy vehicle for taking family vacations. When equipped with the optional 4WD package, the Sequoia becomes a vehicle that can confidently tackle rough terrain. Stick with the base model if you don't desire any extra features.