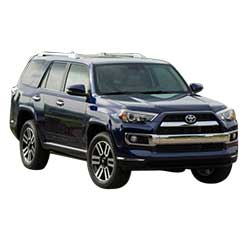 Should You Buy a 2018 Toyota 4Runner? Here Are Some Reasons For and Against

The 2018 Toyota 4Runner looks like your average daily driver SUV. Its exterior is athletic but unassuming, and it looks as spacious as it is on the inside. While the 4Runner is a great family-friendly vehicle by day, by night, it is an awesome off-roader with a surprising towing capacity. It doesn't exactly produce the smoothest ride quality or best gas mileage, but the 4Runner is a fun off-roader for those seeking adventure off the beaten path.

Other than the additions of several new optional packages, everything on the 2018 Toyota 4Runner carries over from the previous year's model.

What makes the 2018 Toyota 4Runner such an excellent off-roader? For starters, this vehicle has incredibly high ground clearance. Also, the low-range gearing and locking rear differential give it an extra tough performance. The most impressive aspect is the TDR Off-Road Premium trim's Kinetic Dynamic Suspension System (KDSS), which has automatically-adjusting stabilizer bars that detect when the vehicle is going off-road. This provides an extra bit of traction in the wheels.

2. Versatility For a Variety of Drivers

Regardless of whether you are buying the 4Runner for its off-roading capabilities or as a daily driver, there are many different options and optional packages that allow for customization. There are six trim levels, all of which share the same standard powertrain and 5,000-pound towing capacity. Aside from that, there are many configurations to choose from. For example, the Limited and SR5 trims come with either four-wheel or rear-wheel drive and either two- or three-row seating.

Aside from its off-roading capabilities, the 2018 Toyota 4Runner is known for its innovative use of cargo space. While there is already plenty of cargo space, Toyota went above and beyond to maximize it with a unique storage design. Also, the rear seats fold down and leave enough room for an adult to comfortably lay down in the back.

Although it isn't the strongest engine, the 4.0-L V6 engine has good acceleration. It gets from 0 to 60 mph is 8.1 seconds, which is faster than some of the 4Runner's competitors.

The steering is always predictable on the 4Runner, even if feedback to the driver is slow. The vehicle handles corners better than some SUVs its size.

Handling is pretty average unless you have the KDSS bars equipped. These stabilizer bars are bigger than the standard ones and, therefore, do a much better job at preventing body roll.

Although having one more speed would be optimal, the 5-speed automatic transmission provides effortless shifting abilities. It doesn't search for gears, so you won't get the lag you might feel on other transmissions.

The seats seem well-bolstered and provide enough comfort for daily commutes. Also, the seats seem wide enough to comfortably fit those with wider hips. For a more ruggedly-designed vehicle, the overall comfort of the cabin is pretty good.

The 2018 Toyota 4Runner has an interior that appears to be made from high-quality materials. The upholstery looks strong, and the stitching on the vehicles with leather interior looks to be well-done. Everything along the dash looks pleasing to the eye, is intuitively placed, and doesn't look like it will break with a bit of wear and tear.

Every 4Runner model comes with a 5,000-pound towing capacity, which puts it toward the head of the class as far as towing is concerned. You can easily tow a trailer behind the 4Runner without it slowing the vehicle down too much.

While vehicles in this class aren't exactly known for producing great gas mileage, the 4Runner tends to lag behind the competition. It only gets a combined 18 mpg, so expect to be spending a lot on gas if you make long drives every day.

The 4Runner's ride quality does not feel as refined as some of its competitors. It feels more like a large truck with all of its shaking, rattling, and rolling. It doesn't handle bumps in the road as gracefully as you might expect for an SUV.

In an era when driver aids are becoming more and more in-demand, Toyota sure is skimping on them in the 4Runner. The Safety Connect® suite (which includes an automatic collision notification) and front and rear parking sensors do not come standard on anything but the higher-level trims, so you will have to pay a lot more to get these features.

4. Difficult to Get In and Out

Since the 2018 Toyota 4Runner has such a high ground clearance, you'd think Toyota would have made side steps standard. However, those are optional but almost necessary to help you step those three extra inches off of the ground and into the vehicle.

The Jeep Grand Cherokee is a long-time favorite in this class, and for many reasons. The 2018 model might not have the same amount of cargo space as the 4Runner, but it has a strong V8 engine that propels it along any road or path without a problem and is definitely a solid off-roader. Like the 4Runner, it suffers from some ride quality issues, but it also has a gorgeous interior design and technological setup that is user-friendly.

The 2018 Dodge Durango is another favorite among consumers for this model year. While the Durango, like the 4Runner, gets poor fuel economy, it has an impeccable towing ability and is great while off-roading. It also has third-row seats that are surprisingly spacious and comfortable.

The 2018 Toyota 4Runner doesn't have the strongest powertrain, and it definitely lacks in ride quality and fuel economy. Still, it manages to be a great off-roader and functional daily driver that is family-friendly. Almost everything about the 4Runner feels predictable, and its 5,000-pound towing capacity makes it stand out against the other vehicles in this class.

Save Money on a 2018 Toyota 4Runner:
Are you Shopping for a New Vehicle? Find the Best Deals with "Free - No Hassle" Prices Quotes.