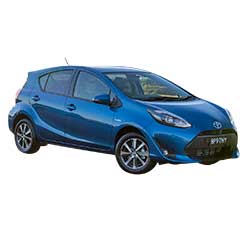 Should You Buy a 2018 Toyota Prius c? Here Are Some Reasons For and Against

The 2018 Toyota Prius c is a compact, hybrid vehicle. The car is front-wheel drive, has four doors and a hatchback. The Prius c makes a great entry-level hybrid car for those who want to go green. The Prius is cheaper than most other hybrid vehicles on the market. If you are looking for a reliable, economic city driver, then the Prius is worth considering.

Not much is new on this year's Prius c model. The Prius received a major overhaul in 2016, so no major style changes were expected for this year's model. 2017 saw some modest changes and additional features. Outside of making alloy wheels standard on all models, the 2018 Prius C is basically the same as last year's version.

In addition to going green, the fuel economy is perhaps the best reason to buy a Prius. The Fuel Economy ratings for the Prius c are the best in its class. It has a combined rating of 46 mpg, but has gotten even better rates in some independent tests.

For a budget vehicle, the good fuel economy will help you to stay on a budget. For a city driver, this car will keep going strong for a long while between fill ups

The 2018 Toyota Prius c is packed with safety features. The best thing is, Toyota doesn't make you pay extra for them. The Prius will warn you of an impending front crash and even automatically engage the brakes to help prevent accidents. There is a lane sensor to let you know when you get outside the lines and a rear camera. The camera helps you to clearly see the blind spots behind the Prius while you back up. Standard features such as front, side and rear-seat airbags are all included as well.

Hybrid vehicles are not cheap in 2018. While there are some less expensive models, the 2018 Toyota Prius c is on the low end of the price ranges. It's truly one of the most affordable hybrid vehicles out there.

The 2018 Toyota Prius c is a bare bones vehicle, but it does offer a good infotainment system. The touchscreen interface is intuitive to use and works well. The menus are all logical with easy-to-see graphics.

The speaker system is basic and maxes out at six, but it sounds great. Smartphone connectivity is integrated well. Toyota's Safety Sense package is now included on all trim levels and is also accessed through this system. A Navigation system can be had at the trim levels of Three and Four.

The interior of the 2018 Toyota Prius c is basic, but well designed. The dash is attractive with all of the controls and gauges located in logical places. The seat positions are perfect and everything seems to be well thought out.

While buzzing about town in your 2018 Toyota Prius c, you'll have plenty of cargo space. The hatchback area offers 17.1 cu. ft. of space with the seats up. The seats can be let down for even more cargo space. If you're getting the groceries, or hauling around anything else, the small Prius still has you covered.

Toyota as a car maker has a great reputation for building reliable vehicles. Because the 2018 Toyota Prius c is a brand-new model, there isn't exactly a lot of data on reliability. The model is basically identical to the 2017 model, however, and the Prius general receives good ratings in this category. You should be able to drive that Prius C for a long time with no worries.

Acceleration is slow, but the handling is nimble in the 2018 Toyota Prius c. The agile vehicle can weave in and out of city traffic easily. It's also easy to find a space and park this compact car.

Braking is solid, though there is a whining noise as the car converts braking energy. Steering is responsive and tight. You can turn this Prius on a dime. The vehicle feels well-balanced, solid and agile on the road. It won't win any speed records, but the Prius c can be fun to drive.

Just like the reliability ratings, there are no major crash test ratings yet for the 2018 Toyota Prius c. Again, since it is essentially the same as 2017, you can assume the ratings will basically stay the same. The NHTSA gave the 2017 model a score of four out of five stars in crash tests.

10. A Good Selection of Trim Levels

This is a simple, basic, budget hybrid. This is even evident in the trim-level names of One, Two, Three and Four. The selections do offer some good options, though in spite of the basic names. One is the most basic of budget cars. Tow adds some extra speakers and other modest features. Three offers proximity entry and a button starter. Four gives you 16-inch wheels and faux leather, among other additional features.

This is perhaps the greatest fault of the Prius. The acceleration is downright sluggish.

While the interior is well-designed, many of the plastics and other materials seem cheap.

At a steady pace around town, the Prius is fine. When you take it out on the highway, the engine noise can start to get loud.

The Toyota Prius c's main competitors include the Honda Fit, Hyundai Ioniq and Chevrolet Spark. The Fit is faster with slightly better performance, but the Prius wins easily with better fuel economy. The only vehicle to beat the Prius in fuel economy is the Ioniq, but not by much. The Prius has a better interior and cargo area. The Spark has a lot of good features, but is significantly more expensive than a Prius.

Hybrids aren't the best choice for everyone, especially not compact, hybrid hatchbacks. If you are on a budget, eco-friendly or concerned with the rising cost of gas, then the Toyota Prius c is a fine choice. For city commuters, it can even be an enjoyable car to own and drive.

Save Money on a 2018 Toyota Prius c:
Are you Shopping for a New Vehicle? Find the Best Deals with "Free - No Hassle" Prices Quotes.