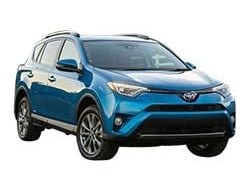 Should You Buy a 2018 Toyota Rav4? Here Are Some Reasons For and Against

The Toyota RAV4 is one of the top competitors in the crossover SUV segment and is regarded as being one of the safest vehicles in its class. Although the vehicle's handling abilities are subpar, the RAV4 offers a lot of safety and technological options that make it worthy of consideration. Also, the Hybrid model, despite not being a plug-in, is actually pretty powerful and fuel-efficient.

Several big changes were made for the 2018 Toyota RAV4. First and foremost, Toyota added the special edition RAV4 Adventure model that includes a number of impressive features. Additionally, The RAV4 models now come with the option for heated, power-adjustable front seats on the lower-level trims, which is not common for vehicles in this class. The steering wheel is now heated as well.

1. A Hybrid Variant is Available

The 2018 Toyota RAV4 Hybrid model packs a surprising punch in terms of power, with its 2.5-L inline-4 engine, three electric motors, and CVT (which replaces the old 6-speed transmission). This powertrain generates up to 194 hp, which is quite a staggering number for a hybrid model in this class. What makes it even more mind-blowing is that the Hybrid gets this much hp with AWD, which comes standard.

Regardless of which trim you choose, the RAV4 has an incredibly spacious cabin. Passengers in the rear have plenty of legroom, and there is an abundant amount of head and shoulder space. Also, the vehicle offers plenty of foot space up front for the driver and front passenger.

There are a ton of active safety features that come standard on all trim levels. These features include a lane departure warning accident avoidance system, stability and traction control, and a Pre-Collision safety system. Many automakers reserve these features for higher-level trims or pack them into pricy bundles.

4. Two-Tone Exterior is Available on the Base Trim

The base SE trim is the only RAV4 model to come with a two-tone exterior for 2018. Even if you just go for one color scheme, there are a lot of chic colors to choose from, and the exterior has quite an athletic appearance.

The 2018 RAV4 Adventure model is ideal for those who want a good off-roading vehicle. This particular model has an elevated ground clearance, the Tow Prep package, lowered body guards, and 18-inch alloy wheels. On the inside, the Adventure has uniquely trimmed panels, a 120-volt outlet located in the cargo area, and a shift knob that is encased in leather.

6. Heated and Power-Operated Front Seats are Available On Lower Trims

Many automakers still do not pay much mind to the front seats on lower trims. Toyota does. You can get heated and power-operated front seats on the lower 2018 Toyota RAV4 trims that come with cloth upholstery. Also, a nice little bonus is that there is a heated steering wheel option.

The 2018 Toyota RAV4 is only one of a small number of vehicles in its class that offers AWD as an option on all trim levels for its gas-powered vehicles. While AWD takes fuel economy down on the gas-powered vehicles, it isn't enough to detract from the powerful performance the AWD adds to the RAV4.

8. Standard All-Wheel Drive On the Hybrid

Hybrids don't tend to come with standard AWD. However, Toyota decided to slap AWD onto the RAV4's Hybrid model, and it actually isn't a big drag on fuel economy.

Max towing capacity on the 2018 Toyota RAV4 is 1,500 pounds. This can be found on the higher-level trims that have AWD equipped. This is about average for the compact SUV segment, although some automakers are trying to kick it up a few notches in order to compete for sales.

The RAV4 has plenty of space in the cargo area for your camping gear, groceries, or other bulky items. With the rear seats down, cargo capacity maxes out at a whopping 73.4 cubic feet, which is quite good for this segment.

Unfortunately, the interior materials look to be of a low-quality make. They seem prone to wear and tear over time, and there are some cheap-looking plastic parts that you don't want to find in a brand new vehicle.

The worst thing about the RAV4 is that its handling is rather poor. The sport-tuned suspension on the base SE trim makes the handling slightly better, but it's not by much. You won't feel secure taking this thing around corners, and you will notice some body roll.

The steering also seems rather weak. There is not much of a response from the steering system to the driver, so it is hard to have confidence in how this vehicle steers in most situations.

It would make more sense for the RAV4's Hybrid model to be a plug-in since it would be able to get further than half a mile on electricity alone. This would reduce some of the range anxiety that potential hybrid drivers have that prevents them from investing in an electric vehicle.

The 2018 Honda CR-V has experienced some improvements for the model year, especially since it was built to the standards of Honda's new global platform. The wheelbase has been lengthened, the width expanded, and the handling and suspension so well refined that driving this SUV feels almost effortless. The only real hang-up to owning this vehicle is that the touchscreen interface is counterintuitive and somewhat confusing for non-tech-savvy drivers.

The 2018 Mazda CX-5 might not be as powerful, but it, like the CR-V, has very natural-feeling handling and steering capabilities. Also, the cabin on the CX-5 looks exquisite and refined, and it is so well insulated that you will not encounter much road noise.

The 2018 Toyota RAV4 is a versatile compact SUV. There are a lot of standard features, and you get quite a few options for customization. Even the base SE trim has a ton of features. However, the RAV4's steering and handling are a major drawback for those seeking a precise performance on the road.

Save Money on a 2018 Toyota Rav4:
Are you Shopping for a New Vehicle? Find the Best Deals with "Free - No Hassle" Prices Quotes.