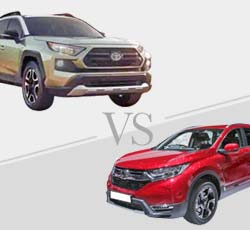 There is no denying that Toyota and Honda are two of the top competitors in the SV segment. When it comes to their crossover SUVS, the Toyota RAV4 and the Honda CR-V are both come out near the front of the pack.

Both of these crossovers have a lot going for them in terms of reliability and fuel efficiency. Also, both have thoughtfully-designed interior spaces. Yet there are some pretty significant differences when it comes to how they perform on the road.

That being said, here are the areas in which the 2019 RAV4 and the CR-V differ.

The 2019 Toyota RAV4 is powered by a 2.5-L 4-cylinder engine that generates 203 hp and 184 lb-ft of torque. It gets paired up with an 8-speed automatic transmission. This is the only powertrain available on any of the RAV4's trim levels, so you cannot go far with customization here.

Meanwhile, the 2019 Honda CR-V gains its power from a 2.4-L 4-cylinder engine on the base LX trim and a turbocharged 1.5-L 4-cylinder on the higher trim levels. The base 2.4-L engine musters up 184 hp and 180 lb-ft of torque while the turbocharged version trades torque for horsepower, getting 190 hp and 179 lb-ft of torque. A continuously variable automatic transmission (CVT) comes with both powertrain options.

Both the RAV4 and CR-V's base engine can feel a bit underwhelming in terms of their power output. However, the CR-V does offer that turbocharged option, which generates more horsepower, leading to a more pleasing drive performance.

The CR-V's small-displacement turbo engine is remarkably strong considering its size. In other vehicles, an engine like this typically would not fare well, coming off as sluggish and dull. In the CR-V, however, it feels just right.

There is a huge difference in terms of how these vehicles accelerate due to their powertrain differences. With the turbo 1.5-L engine equipped on the CR-V, it can go from 0 to 60 mph in just 7.5 seconds. The RAV4 takes several seconds longer, clocking in at about 9.1 seconds - a slow time for this segment.

Now, it is important to mention the differences between the transmissions. CVTs are built for swift acceleration without the interruption of shifting gears. CVTs make for a better driving experience, but when it comes to repairing them, they can be more expensive (and, sometimes, more problematic) than regular automatic transmissions.

The RAV4's 8-speed transmission is not terrible by any means. It actually does a good job of covering up the vehicle's lack of low-end engine power. It downshifts with ease and has seamless shifting overall. However, shifting does take longer since the transmission is working to shift more smoothly. That does not really help when trying to get the vehicle going quickly on the highway.

As far as braking goes, the CR-V comes out on top with its responses during all types of braking situations. It can make an emergency stop in 116 feet when going from 60 to 0 mph. This is exactly what one should expect from a crossover SV. On the other hand, the RAV4 takes 126 feet; this is still within the average but clearly not as good as the CR-V. The brakes do feel secure and steady though.

Also, when it comes to warranties, both Toyota and Honda offer 3-year/36,000-mile basic and 5-year/60,000-mile powertrain warranties. The RAV4's hybrid system has a warranty for 96 months/100,000 miles. Roadside Assistance is included in the basic warranties on both vehicles.

Drivability is a huge factor when it comes to buying a new car. That's why it is crucial to note the differences in drivability between the 2019 CR-V and the RAV4. When it comes to how these vehicles perform on the road, the Honda CR-V shines as an example of engineering done well.

The CR-V might not have hill descent control, but it does have some off-roading capabilities. Its ground clearance of 7.8 inches on the front-wheel drive models and 8.2 inches on the all-wheel versions mean that the CR-V can handle dirt and gravel roads with ease. Of course, it is only meant for light off-roading, as is the case with autos in this class.

Overall, the CR-V has an enjoyable ride quality. The CVT provides smooth transmissions, so the ride does not get interrupted. Occupants will only feel an initial bump when the vehicle hits one, but the CR-V smooths it right out. There is some tire and wind noise that get into the cabin, but it is kept to a minimum. The engine won't make a fuss, and pushing it into high gear won't even generate that much noise.

Seats are well-bolstered inside of the CR-V, but the only height-adjustable seat is reserved for the driver. The rest of the interior is thoughtfully laid out, with the door openings being wide enough to make getting in and out easy for the average adult. Up front, head and leg room feel adequate for this class, and the rear seat is one of the most spacious you will find in an SUV.

Visibility from behind the CR-V's wheel is unhindered, and the standard rear view camera is helpful for backing out of a tight parking spot. Blind spots are small, and, if the vehicle is equipped with blind spot monitoring (which is standard on the EX trim level and above), seeing those spots is simple.

As for the 2019 RAV4, the interior is fairly comfortable. In fact, everything is pretty cozy, save for the stiffness of the bottom cushions on the front seats. The rear seats have reclining backs for passenger comfort, and their seat bottoms are padded for comfort.

The problem with the RAV4 is that the 2.5-L engine can be a rough runner. It is not necessarily a bad thing, but it can get a little annoying when trying to converse with rear seat passengers. Road noise is kept muted, and wind noise can only be heard when the optional roof racks are equipped.

Both the RAV4 and CR-V come with heated front seats (save for the LX trim on the CR-V), but the RAV4's seats don't get very warm, even when cranked all the way up. The RAV4's climate control knobs are bigger than the CR-V's and a bit easier to configure.

There is no doubt that safety is a chief concern for both Toyota and Honda. In fact, both of these automakers are known for their safety ratings and features. Driver aids come en masse in the RAV4, and the CR-V offers a solid list of standard driver aids as well. The RAV4 features drowsy driver detection, lane keep assist, and line tracing assist - a feature which functions as an active steering assistant. Honda equips the CR-V with standard blind spot monitoring, automatic emergency braking, and forward collision warning.

Honda's safety features mostly function well, but forward collision warning occasionally gives an unnecessary warning when driving the vehicle through congested urban traffic. It is annoying, to be sure, but can be dealt with. As for the RAV4, there are not too many reports of its driver aids being glitch-y.

The RAV4 comes with 8 airbags. There is a front passenger and driver Advanced Airbag System with seat-mounted side airbags for both the driver and front seat passenger, driver knee airbags, rear and front side curtain airbags, and a seat cushion airbag for the front seat passenger. Front seat belts have pretensioners with force limiters, and the rear doors have child safety locks.

The Honda CR-V has the standard array of airbags as well, but it should be noted that the 2019 CR-Vs have been recalled for airbags that might deploy at random. Models built between October 3, 2018, and April 1, 2019 are listed under the recall, which began in July of 2019.

As far as safety ratings go, the National Highway Transportation Safety Administration (NHTSA) has not yet given a full review of the 2019 Honda CR-V. It did assign 4/5 stars on the rollover test, noted that there was no tip on the dynamic test, and gave it a 16.3% chance of having a rollover. The Insurance Institute of Highway Safety (IIHS) assigned the CR-V "Good" ratings on everything but the IIHS small overlap front test, which has not been rated yet.

The 2019 Toyota RAV4 has some solid safety ratings from NHSTA. It received 4/5 stars on the Overall, Driver, and Rollover tests and 5/5 stars on everything else. No tip was noticed, and NHTSA assigned a 15.9% chance of the RAV4 having a rollover. This score is pretty standard for a crossover SUV. The IIHS gave the RAV4 some high marks, but it missed out on being a Top Safety Pick due to its headlights getting moderate to poor ratings, depending on the trim level.

Price-wise, the CR-V and RAV4 are highly competitive. The CR-V has a starting MSRP of $26,945 while the RAV4's is $26,745. Both of these vehicles offer a wide array of standard options. The RAV4 even shines when it comes to driver aids. But the RAV4 has one thing stacked against it that decreases its overall value: Its under-powered engine.

In today's world, fuel efficiency is at the forefront of drivers' minds, which is why many automakers opt to use 4-cylinder engines on sedans and some SUVs. These engines tend to sip less on fuel, but some of them end up feeling slow. Hence the reason Honda added the turbocharged option on the EX and above.

Toyota should have followed suit with Honda, putting a turbocharged version of the RAV4's engine into the mix. But, for whatever reason, they have not done so. It would make sense to do so, as this would help the RAV4 compete even more with the CR-V. Customers want choices, and many will choose something that has a bit more thrust in its power output.

Overall, these two vehicles come close in value, but the CR-V edges out the RAV4 by a hair thanks to the fact that Honda offers a turbocharged engine option, granting the vehicle more power.

Either vehicle is a good choice if you are looking for something that is fuel efficient. The 2019 Toyota RAV4 has an amazingly long list of standard driver aids that are helpful for those who make frequent, long drives, and the 2019 Honda CR-V is creatively crafted with young families in mind. The CR-V, however, offers the best engine option and leaves a little more room for customization. That is why the CR-V beats out the RAV4 in this comparison review.
Save Money on a 2019 Toyota RAV4:
Are you Shopping for a New Vehicle? Find the Best Deals with "Free - No Hassle" Prices Quotes.