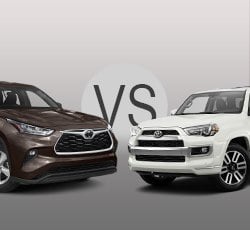 2020 Highlander vs 4Runner - How do they stack up? What are the differences?

Looking for an SUV that is powered by a strong V6 and can be taken off the beaten path? If so, then you might want to look more deeply into the 2020 Toyota Highlander and its sibling, the 2020 Toyota 4Runner. These two vehicles are strong, capable, and compliant with a ton of features tacked on to each. But is one better than the other in any way?

The 2020 Toyota Highlander offers you a quiet ride, a sturdy V6 engine, an upscale interior design, and a lot more standard features than ever before. On the downside, the Highlander has limited third-row space, no height adjustability on the front passenger seat, and overall just feels like it was not fully redesigned. Standard smartphone app integration is a bonus, but that is something that Toyota should have added several years ago.

As for the 4Runner, you get one capable off-roader in this vehicle. It comes in so many configurations that you might find yourself spending a lot of time trying to decide on just the right one, but that is not a bad thing if you like having a lot of choices. The 4Runner also has a versatile cargo area with its optional slide-out floor. But the 4Runner has its drawbacks too. For instance, the ride can get clumsy and bumpy over rough road surfaces, and the V6 is not too fuel-efficient. Also, there is a tall step-in height that makes for a less-than-graceful entry into and exit from the vehicle. If you have short legs or have mobility issues, this vehicle might prove to be a challenge for you to pop in and out of.

So, which of these two Toyotas is the right one for you? Should you look at something else entirely? Let's do a comparison review of these two vehicles. We will go over how they drive, their comfort levels, interior design, technology, utility, and safety features and ratings. In the end, we will let you know which one we think has the most value and is our top pick.

The 2020 Toyota 4Runner is powered by a 4.0-L V6 engine that is paired with a 5-speed automatic transmission that helps it generate 270 hp and 278 lb-ft of torque. The SR5 and Limited trim levels come with front-wheel drive (FWD) and seats 7 people, while the other trims have all-wheel drive (AWD) and seats 5 people.

Meanwhile, the 20202 Toyota Highlander is powered by a 3.5-L V6 engine that is paired with an 8-speed automatic transmission. Together, these elements get the Highlander 295 hp and 263 lb-ft of torque. FWD comes standard, but AWD is optional on every trim level. You can also opt for a hybrid variant if you are interested in getting a better fuel economy from your SUV.

There are more aspects to a vehicle's drivability than just how it drives, although that is one of the aspects needing consideration here. The 2020 Toyota 4Runner gets a moderate amount of power smoothly delivered by the powertrain. The vehicle can certainly hold its own in congested city traffic. The brakes are a bit jumpy though, and you will notice a fair amount of nosedive when you have to make an emergency stop. The 4Runner takes turns nicely, smoothly rounding through corners and maintaining composure all the while. The vehicle never feels unstable, but it never comes across as being quite as nimble as some of the more sedan-like crossover SUVs. Still, its off-roading capabilities are superb, and you get a ton of ground clearance.

The 2020 Toyota Highlander provides a remarkably smooth ride quality, even when you equip it with the 20-inch wheels. On many vehicles, wheels of that size will take the ride quality down quite a bit by letting more bumps be felt, but that is not the case in the Highlander. The Highlander gives you easy acceleration when fully loaded, so do not worry about the vehicle feeling sluggish when you are carrying a full cabin and cargo.

When it comes to their interiors, Toyota does quite a bit to create a comfortable ride. Unfortunately, the 4Runner has a bit of a stiff and bouncy ride quality, and due to its boxy body shape, there is a lot of wind noise that makes its way into the cabin. There is road noise that comes in from the tires, but it is extremely tame since the body construction gives the 4Runner an added layer of soundproofing between the road and the 4Runner's cabin.

On the other hand, the Highlander has a really plush ride quality, and it smooths out every imperfection with its extremely compliant, well-tuned suspension. It does not come off as being light and drifty at higher speeds. The front seats are comfortable, and the optional second-row captain's chairs are padded for comfort. The third row of seats is more thinly padded, and the row itself is pretty narrow - nothing new for the third-row SUV segment though. Also, note that there is a lack of road and wind noise within the cabin.

The 4Runner's tall ride height is a bit problematic since this makes getting in and out kind of difficult. You will have to get side steps added on if you are a shorter person or someone who has limited mobility. Inside the cabin, the controls are all well-marked and easy to use, and the driver's seat is highly adjustable, making it simple to find a driving position with a commanding outward view. You get plenty of space in the front and rear seats, and taller adults will find they can extend their legs in the back without a hassle. The 4Runner has excellent visibility on the sides because of its large windows and square shape.

The interior of the Highlander has that third row that is entirely too narrow compared to what the competition offers. It is easy to find a driving position in this vehicle, but it does not have a lot of telescoping range in the steering wheel. Again, with the Highlander, you get vast external visibility thanks to how well the roof pillars and wide windows and windshields are designed. You can load up the cargo area and still get a good glance in the rear view mirror. If you still feel you need an extra set of eyes, there is an optional surround-view camera that gives you a sharp view all around the vehicle.

Technology is something that Toyota has worked hard to improve for 2020. It might still have a way to go to catch up with the competitors, but they have made a big leap with both the 4Runner and the Highlander. These vehicles both have standard smartphone app integration via Android Auto and Apple CarPlay. The 4Runner has a new touchscreen system with a larger screen that has better graphics and shortcuts that have been repaired so that you do not need to stare so much at the screen, which can certainly be a distraction while driving. The Highlander gets an optional 12.3-inch touchscreen that is properly responsive but gives off a lot of glare. There are plenty of USB ports in the second and first rows, but the third row oddly has none.

When it comes to utility, both vehicles are spacious. The 2020 Toyota 4Runner has a lot of cargo space - so big that you can even sleep back there! You can get to the cargo area by opening up the hatch or rolling down the power rear window. The second row is spacious enough for bulky rear-facing child safety seats. You get a 5,000-pound maximum towing capacity and pre-wiring for a 4- or 7-pin trailer.

Meanwhile, inside of the Highlander, you get 16 cubic feet of cargo space with all seats left in place. Take the third row down and you will get 48 cubes. The liftover height is pretty standard, and there are some large door pockets and cup-holders. There are two shelves that are built into the dash for small item storage, but the wireless phone charger tends to get in the way. Again, the LATCH system is easy to use, and you can fit bulky seats in the second row. However, there are no anchors in the third row. Kids in seats will need to be put in the second row only.

Toyota loads a lot of standard safety features onto its vehicles, and the 4Runner and Highlander both reflect that. Toyota Safety Sense comes standard. This gives you pre-collision warning with pedestrian detection warning, lane departure warning, automatic high beams, and adaptive cruise control. The adaptive cruise control system works well, but lane departure warning can be too sensitive in normal and not sensitive enough in low mode.

Of course, safety ratings can tell you a lot about how a vehicle will perform in a crash scenario. The Insurance Institute for Highway Safety (known by the acronym IIHS) rated the 4Runner as getting an "M" on the small overlap front driver side test, a "P" on the halogen headlights for too much glare from the low beams, and "M" for the LATCH anchors being buried too deep within the seats. The National Highway Traffic and Safety Administration (better known as NHTSA) gave the 4Runner 5 stars overall but 4 stars for the front driver side test. It also go 4 stars on the rollover test. Recalls have been issued for coolant leaks that might damage the engine. Complaints from consumers center around the gas tank not holding gas as it was supposed to, the fuel gauge being inaccurate, and a dead battery.

IIHS also rated the Highlander this year. They named it a 2020 Top Safety Pick. It got an "A" on the Limited trims for the LED projector headlights and a "P" on the lower trim levels' lights. NHTSA has not yet rated the vehicle, but there has been a recall for the ECU, which might erroneously cause the vehicle to stall.

So, which of these two Toyotas has the best value? The 4Runner costs more than some crossovers, but you do get good towing and off-roading capabilities on it. The 4Runner will also have a strong resale value in the future, and you get 2 years of free scheduled maintenance along with the industry-standard warranty. Downside? The fuel economy is pretty poor with just 17 mpg combined (with 16 mpg in the city and 19 mpg on the highway).

Regarding the Highlander, this is also a bit more expensive than its rivals, and you do not get as many standard features on the Highlander as you do from other automakers. Its interior is just average in terms of quality, as is the warranty coverage (which also includes those 2 years of free scheduled maintenance).

The 2020 Toyota Highlander just barely bests the 4Runner. While the 4Runner is a good off-roader, its fuel economy is subpar, and the boxy design allows way too much noise into the cabin. The Highlander has the smarter design and seems to have better safety ratings so far, which is something you should consider going forth with your decision to buy a vehicle.

Save Money on a 2020 Toyota Highlander:
Find New Car Clearance Prices - Many Vehicles are Selling Below Dealer Invoice Prices.