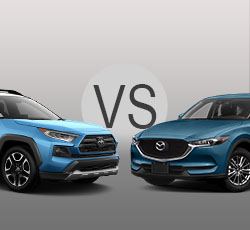 Compact SUVs have to do more than ever if they want to stand out from the pack. Two vehicles that try to do just that are the Toyota RAV4 and the Mazda CX-5. Both of these options try to put the "sport" back into "sport utility vehicle," although in slightly different ways.

The 2020 RAV4 is part of the fifth generation of this vehicle, which launched just last year. Drivers will be glad to know that this SUV finally gains Android Auto compatibility. There is also a brand-new TRD Off-Road trim level to consider.

As for the 2020 CX-5, it has gained more standard driver assistance features. Only in its second generation, this is a newer contender for drivers to consider. Like many vehicles in the Mazda lineup, the CX-5 appeals to anyone who is after superior driving dynamics.

On the surface, these two vehicles are similar. Digging deeper will reveal that they are actually completely different types of SUVs. Read on to get to know both of these options in-depth to simplify the decision-making process.

Buyers who like to have engine options will be disappointed by the 2020 Toyota RAV4. Standard across the board is a 2.5L four-cylinder that has the ability to make 203-horsepower and 183 lb-ft of torque. Although that is respectable power, it seems unusual that there is not an engine upgrade available.

Working with the engine for the RAV4 is an eight-speed automatic transmission. For most trims, front-wheel drive is the standard and all-wheel drive is optional. Going with either the Adventure trim or the TRD Off-Road will mean getting the all-wheel drive, however.

The 2020 Mazda CX-5 does give consumers three different engines to consider. Standard for the Sport, Touring, and Grand Touring trim levels is a 2.5L four-cylinder that can pump out 187-horsepower along with 186 lb-ft of torque. It works with a six-speed automatic transmission.

Models of the CX-5 that have the non-turbocharged engine are only available with front-wheel drive. On the flip side, the turbocharged models come with all-wheel drive automatically.

New for 2020 is an available diesel engine option for the CX-5. It is a 2.2L four-cylinder and it makes 168-horsepower and 290 lb-ft of torque. Considering that both of these numbers are lower than the turbocharged gas option, it is unlikely that the diesel will appeal to many people.

One thing that both of these vehicles have going on for them is fuel efficiency. The Toyota is particularly good, offering 28mpg in the city and 35mpg on the highway with its only engine. Even going up to all-wheel drive does not really impact efficiency, dropping both numbers down by only one.

The CX-5 is no slouch in this category either. With the standard engine, drivers can expect 25mpg in the city and 31mpg on the highway. The turbo engine paired with all-wheel drive also does decently with estimates sitting at 22mpg city and 27mpg highway. Diesel models are estimated to get 22mpg city and 30mpg highway. Although the diesel is slightly more efficient on the highway, it is still a hard sell over the turbocharged option.

Those who rely on warranty or reliability ratings to choose a vehicle are out of luck when deciding between these two. They both come with a three-year/36,000-mile basic warranty along with a five-year/60,000-mile powertrain warranty. Both vehicles also received three out of five stars in predicted reliability from J.D. Power.

Interior dimensions for these two SUVs are quite similar. The front row of either option has 41-inches of legroom, for example. When it comes to hip, shoulder, and headroom in the front, the RAV4 has more room than the CX-5, but not by much. The second-row of these vehicles is a different story, however. The CX-5 has almost two inches more of legroom in the back. It has slightly less shoulder room but significantly more hip room.

If cargo space is going to be a deciding factor, the 2020 RAV4 becomes the obvious choice. It has 37.6 cubic feet with the rear seats up and a maximum capacity of nearly 70 cubic feet. At the same time, the 2020 CX-5 has just 30.9 cubic feet with all of the seats up. Folding down the back seat will give drivers just 59.6 cubic feet. This is not only small compared to the RAV4, but also in comparison to most vehicles in this class.

Both of these SUVs come with a 7-inch touchscreen standard and have an 8-inch touchscreen available. Smartphone integration via Android Auto and Amazon Alexa is standard for all trims of the RAV4. These features are not available for the entry-level CX-5 but are included on all higher trim levels.

The infotainment system of the RAV4 is slightly more user-friendly thanks to the standard voice recognition. This option also comes standard with a convenient WiFi hotspot. It only has one USB port, however, while the CX-5 comes with at least two.

As far as interior quality, both the RAV4 and the CX-5 are quite nice. The RAV4 looks much better thanks to its redesign back in 2019. That said, there are very few non-luxury vehicles that can rival the CX-5 when it comes to comfort and sophistication. Not only is it visually appealing, but it also helps both the driver and passengers sit back and relax.

Speaking of relaxing, the CX-5 has excellent ride quality to offer as well. Only the largest of bumps will be felt inside the cabin. The ride quality of the RAV4 is also quite nice. At the same time, more road and wind noise manages to make its way inside of this Toyota SUV.

If a buyer is looking for a vehicle they can drive off-road, the RAV4 is going to be the way to go. Both the Adventure and TRD Off-Road trim levels are loaded with rugged features such as dynamic torque vectoring steering and hill descent control. With 8.7-inches of ground clearance, these models are ready to leave the beaten path.

For many buyers, safety is the most important factor when choosing a new vehicle. That is why ratings from the National Highway Traffic Safety Administration are so important. Both the 2020 Toyota RAV4 and the 2020 Mazda CX-5 received an overall score of five out of five in their testing.

Another reliable source when it comes to safety evaluations is the Insurance Institute for Highway Safety. They have awarded the RAV4 with the title of "Top Safety Pick." It received a rating of "Good" in all six crash tests that the IIHS performs.

The Mazda CX-5 manages to one-up the RAV4, however. It was named a "Top Safety Pick Plus." It, too, received a "Good" score for all six tests. What gave it the edge was its headlights, which received either "Good" or "Acceptable" scores, depending on the model. The RAV4's headlights got only a "Marginal" rating.

While both of these options have their share of advanced safety aids, the RAV4 has a few more than the CX-5. Standard for the 2020 RAV4 are useful features like pedestrian detection, traffic sign recognition, automatic emergency braking, pre-collision warning, adaptive cruise control, lane tracing assist, and automatic high beams. Both lane departure warning and lane-keep assist are standard as well.

Buyers can get more sophisticated technology if they go with higher trim levels of the RAV4. Available features include things like rain-sensing windshield wipers, a blind-spot monitor with rear cross-traffic alert, rear parking sensors, and a surround-view camera system. Select trims also get the highly advanced rearview mirror camera feature.

On the other hand, traffic sign recognition is merely available for the CX-5. Other features found on select models include a surround-view camera system as well as front and rear parking sensors. Unlike the RAV4, the CX-5 also offers a head-up display.

Both of these SUV options have higher than average starting prices for the vehicle class. That said, the CX-5 is the more affordable option. Its entry-level trim starts at around $25,000. The RAV4 is not much more, starting at $25,850. Considering its longer list of driver aids and standard smartphone integration, the extra money seems justified here.

For the top-of-the-line CX-5 Signature, drivers are looking at around $37,000. Buyers after a luxurious RAV4 will want the Limited trim level, which starts at $34,380. Those who seek adventure will want the new TRD Off-Road and will shell out at least $35,180. Although that is less than the ultimate version of the CX-5, buyers should know that the RAV can easily cost over $40k by the time they are done adding options and packages.

Kelley Blue Book estimates how much different vehicles will cost to own over the course of five years. The numbers for the two are quite similar here. When it comes to out-of-pocket expenses, such as insurance, fuel, and repairs, the RAV4 is estimated to cost around $19,293. This is not much less than the CX-5, which is estimated to cost $19,589.

Loss of value is another important factor to keep in mind. KBB estimates that a new RAV4 will lose approximately $14,715 over the course of five years. Once again, the CX-5 is just a bit higher. It is estimated to lose $14,948 over that same five year period.

Anyone who wants a luxurious SUV without paying a luxury price will fall in love with the 2020 Mazda CX-5. It is ideal for anyone who wants an engaging drive and a sophisticated interior. The CX-5 also offers enough tech and safety features to make an adequate family hauler.

The better option for most consumers, however, is going to be the 2020 Toyota RAV4. This well-rounded vehicle has more cargo space, more standard tech and safety, and an off-roading variation to consider. Any buyer who is seeking a practical vehicle that can serve a variety of purposes will be satisfied with the RAV4.

Save Money on a 2020 Toyota RAV4:
Find New Car Clearance Prices - Many Vehicles are Selling Below Dealer Invoice Prices.