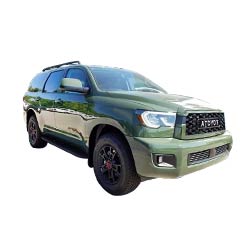 What 2020 Toyota Sequoia Trim Level Should you Buy? What is the Difference Between Trims?

Move over sedans - the three-row SUV has taken over the market as far as many families are concerned. Even families that don't need that third row of seats enjoy the space provided by folding them down. As a result of the demand, this segment of the market is packed with options.

The 2020 Toyota Sequoia has been around for a long time. Critics have said it has been left behind by the competition, but recent years have seen upgrades to both tech features and advanced driver aids. It has one of the biggest cargo areas consumers will find in its class. The Sequoia is also a top-choice for those who need to combine space with off-road capability. As a bonus, this vehicle offers drivers very a respectable towing capacity.

For 2020, Toyota is introducing a brand-new trim level known as the TRD Pro. This model is even more capable than the rest. In total, there are now five options to consider. The entry-level model, known as the SR5, will appeal to many with its respectable list of standard features and lower price. Going up through the trim ladder adds more and more, culminating in the top-of-the-line Platinum and TRD Pro models.

In this guide, the differences between all five trim levels is covered in great detail. The goal is to better inform drivers about their options so that they can determine which model is best for their needs.

Compare the 2020 Toyota Sequoia SR5 vs Sequoia TRD Sport Trims.  What is the difference?

Option one for consumers is the SR5. It is available in both a 2WD and 4WD version. The SR5 is powered by the same engine as all models of the 2020 Toyota Sequoia. It is a 5.7L V8 that generates 381-horsepower as well as 401 lb-ft of torque. Working with this engine is a six-speed automatic transmission. Skid plates for the engine and transfer case are standard on 2WD models. The 4WD models only has the transfer case skid plate. Versions with 2WD can tow up to 7,400 pounds, while the 4WD models go down to 7,100.

The SR5 is loaded with LED lights. These include the low beams, daytime running lights, and fog lights. There is a rear spoiler complete with a center-mounted LED brake light. The SR5 has an attractive chrome grille featuring a dark silver accent and insert. The side mirrors are body-colored and heated. Also standard is a power tilt-and-slide moonroof with sliding sunshade. The SR5 has silver roof racks.

Coming standard on the SR5 is a windshield wiper de-icer. Drivers will also find privacy glass on the rear and liftgate windows. Black running boards, which are useful for getting into the Sequoia, are standard as well.

Inside the cabin, drivers will find easy-to-clean fabric upholstery in the SR5. The driver's seat has eight-way power adjustment, while the front passenger gets four-way power adjustment. Drivers can add leather-trimmed heated seats with more power-adjustment features as part of an available package. The second row seats have a 40/20/40 split-folding feature. Drivers can hit one button to power-fold this seat and gain access to the third-row. This third-row has a more traditional 60/40 split-folding feature. Tri-zone automatic climate control is standard, a nice touch that is not usually found on entry-level models.

All trims, to include the SR5, come equipped with a Smart Key System. It works to unlock the front doors as well as liftgate. Also possible thanks to this system are remote keyless entry and push-button start. The cargo area has a 12V auxiliary power port. For further convenience, there are a total of 16 cupholders strategically placed in the cabin.

Next up is the infotainment system, which runs on a 7" touchscreen. This system is compatible with Amazon Alexa, Apple CarPlay, and Android Auto. It also works with Bluetooth. Coming with the 2020 Sequoia SR5 is also a three month trial of SiriusXM satellite radio. The audio system comes standard with eight speakers. Navigation can be added to this trim.

The SR5 also comes standard with what Toyota calls its Star Safety System. This is a group of more traditional safety features. It includes traction control, vehicle stability control, and brake assist.

Drivers who want to move up a level will be looking at the TRD Sport. It has the same engine and is also available as a rear-wheel-drive or 4WD vehicle. What is mechanically different is the sport-tuned Bilstein dampers as well as the stiffer anti-roll bars that make it more off-road ready.

Outside, there are a few styling differences between the SR5 and the TRD Sport. The TRD Sport has more chrome accents, rather than the dark silver ones found on the SR5. Rather than body colored mirrors, the TRD Sport has black ones instead. The roof racks are also black on this trim.

Inside, the TRD Sport goes down to seating for seven, whereas the SR5 comes standard with seating for eight. The second-row features comfortable captain's chairs. Like with the SR5, cloth seating is standard but leather-trim can be had as part of an available package. The other minor change is the floor mats, which feature a specialized TRD stitching.

When it comes to the infotainment and safety features, these two models are identical. Ultimately, whether or not the TRD Sport is worth the extra money depends on how much off-roading the consumer plans on doing.

Compare the 2020 Toyota Sequoia TRD Sport vs Sequoia Limited Trims. What is the difference?

The Limited trim moves away from the off-road features and adds a little more sophistication instead. It loses the upgraded suspension. Still, it has a 2WD or a 4WD version and the same powertrain.

Outside, the chrome features go back to being dark silver. The side mirrors are heated, auto-dimming, and include integrated turn-signals. This is the first model that gives drivers a power liftgate with jam protection. The Limited is also the first to give drivers black running boards with a color-keyed surround.

Many of the seating upgrades that were optional on previous trims become standard for the Limited. This includes the leather-trim and extra power-adjustment. A memory feature for the driver's seat and side mirrors is available. Like the SR5, the Limited trim comes standard with seating for eight people. Second-row captain's chairs are available. Windows in both the second and third rows get retractable sunshades. The rearview mirror becomes auto-dimming and features a HomeLink universal receiver that allows drivers to sync their Sequoia with their garage door, security system, or gate.

The audio system gets upgraded to 12-speakers inside the Limited. A 14-speaker system is available as part of a package. Navigation becomes standard on this trim level. There are no additional safety features added to the Limited model.

Overall, the Limited trim may be better suited for daily family life. It has more convenience and comfort features, making it worth a little extra for many consumers.

Compare the 2020 Toyota Sequoia Limited vs Sequoia Platinum Trims. What is the difference?

Those seeking even more luxury should take a look at the Platinum trim level of the 2020 Toyota Sequoia. Although not technically an off-road-oriented model, it does have a better suspension than the SR5 and the Limited models. It utilizes adaptive-air and features a load-leveling rear. Interestingly, the Platinum trim takes a bit of a hit when it comes to towing capacity. The 2WD models have a limit of 7,200 pounds. Going with 4WD models takes the number down to 7,000 pounds.

On the outside, the side mirrors gain both reverse tilt-down and standard memory features. It also adds puddle lights. Inside, the Platinum trim adds a rear-seat Blu-Ray player that uses a 9" screen and comes with both a remote and two pairs of wireless headphones. This was an available option for the Limited trim. The Platinum trim is the only one to feature 18 cupholders rather than 16.

Everyone will be more comfortable in the Platinum trim thanks to the perforated leather as well as the heating and ventilating feature. Once again, the seating goes down to seven with standard second-row captain chairs. These chairs are heated and get a multi-function center console in between them. The steering wheel gains a power tilt and telescoping feature as well as leather. The 14-speaker audio system becomes standard for the Platinum trim. It comes with a subwoofer and an amplifier.

Once again, there are no additional safety features gained by going with the Platinum over the Limited trim. The upgrades are primarily tech and comfort related. Still, there are enough of them to entice many.

Compare the 2020 Toyota Sequoia Platinum vs Sequoia TRD Pro. What is the difference?

Finally, drivers can choose the TRD Pro. This model is only available in 4WD and can tow up to 7,100 pounds. It has a specialized pro front and rear coil-independent double-wishbone suspension. There are also special TRD Fox shock absorbers to help smooth out the bumps when the Sequoia goes off-road. Also helping the TRD Pro are standard front skid plate and all-weather floor mats.

Outside, there are rigid foglights. The side mirrors lose the memory and reverse tilt-down features but maintain the heat and integrated turn signals. Special TRD Pro logos are found on the front door and the liftgate. The running boards are still black here but gain aluminum accents.

Inside, there is no longer even the option of adding the rear Blu-Ray player. Also missing are the second and third-row power-retractable sunshades. The seating is still leather-trimmed but gains unique red stitching. This model has the second-row captain's chairs, also with red-stitching. There is even a special TRD Pro shift knob.

Consumers who plan on off-roading in their Sequoia may find the TRD Pro worth the money. Those who do not leave the beaten path will likely find it unnecessary.

Consumers get five strong choices when it comes to the 2020 Toyota Sequoia. With standard smartphone integration and a suite of standard safety features, there really is no bad choice here. The biggest question drivers must ask themselves is whether or not off-road capability is important to them.

Drivers who do plan on leaving the beaten path should go with the TRD Pro. While the TRD Sport has nice upgrades, they cannot compete with the capability provided by going Pro. The exception would be if the consumer preferred rear-wheel-drive to 4WD, as this is an option on the TRD Sport but not the TRD Pro.

For everyone else, sticking with the SR5 is probably going to be more than enough. Moving up the trim levels does not add any safety features and very few tech upgrades. Those who really want a few extra comfort feature can add the Premium package. This will add nice touches such as navigation and the heated seats.

Consumers do not need to leave the entry-level model in order to get a well-equipped version of the 2020 Toyota Sequoia.

Save Money on a 2020 Toyota Sequoia:
Are you Shopping for a New Vehicle? Find the Best Deals with "Free - No Hassle" Prices Quotes.