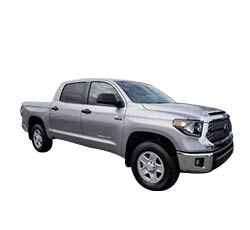 What 2020 Toyota Tundra Trim Level Should you Buy? What is the Difference Between Trims?

Sometimes, consumers are just looking for a workhorse. In those cases, the Toyota Tundra is an appealing choice. This vehicle has been around for a long time and has a reputation for being highly-capable. It may not be one of the fancier full-size trucks out there, but drivers know they can rely on it to get the job done.

This vehicle is still in its second generation, but that generation debuted way back in 2007. Still, Toyota has made some upgrades to the Tundra over the years to help it stay competitive. In 2020, both Android Auto and Apple CarPlay join the list of standard equipment. It loses an engine option this year as well.

Buyers have a lot to consider when picking out there 2020 Toyota Tundra. There are three bed lengths, two cab styles, and six different trim levels. The following article is designed to concisely yet thoroughly explain the differences between the models. In the end, consumers should be better prepared to make a choice.

Compare the 2020 Toyota Tundra SR vs SR5 Trim Levels.  What is the difference?

One thing drivers do not get a choice about for the new Tundra is the engine. The SR, like all the models after it, is powered by a 5.7L V8 that generates 381-horsepower and 401 lb-ft of torque. Toyota has paired this engine with a six-speed automatic transmission.

The SR trim is only available with a double cab. It can be had in either a 4x2 or a 4x4 version. Consumers can choose between a 6.5-ft bed and an 8.1-ft bed with either drivetrain option. There is a standard stainless steel exhaust system. Drivers get 18" wheels. There are no upgrades available for this trim. All-season tires are standard and a full-size spare is included. This spare is mounted underneath the truck body.

There are automatic headlights on the SR trim. They are halogen but include LED accents. The side mirrors are black and heated. Other exterior features found on this trim include solar energy absorbing glass, an easy lower and lift tailgate, and front and rear mud guards. Running boards are optional.

Inside, both the driver and passenger seats have four-way manual adjustment. Standard for the cloth front bench is a 40/20/40 split-folding feature. Vinyl is an available option. The rear bench has a 60/40 split-fold. Since it comes with a double cab only and does not offer front bucket seats, the SR always has a seating capacity of six.

The Toyota Safety Sense suite makes an appearance for the SR trim. This gives the Tundra a pre-collision system that includes pedestrian detection, something often not seen on other vehicles until higher trim levels are reached. Also included for this trim are useful features such as what lane departure alert, automatic high beams, and a tire pressure monitoring system. Dynamic radar cruise control, which is essentially what Toyota calls adaptive cruise control, is standard as well.

There is only one package available for this trim. It is called the SR Work Truck package. With this, the Tundra gets the vinyl seating and flooring and also loses the wireless door lock feature.

Going up to the SR5 trim level means being able to choose between the double cab and the crew cab. It also adds a short bed, which measures in at 5.5-ft, as an available option. Although the same wheels are standard, drivers can choose fancier 18" wheels or go up to 20" instead. Adding tires that are both all-season and all-terrain is also optional for the SR5.

This trim has halogen headlights. It offers LED lighting as part of an optional package. Also available are front two hooks and skid plates on the engine and fuel tank. Drivers also have the option of upgrading to a larger 38-gallon tank for their Tundra here.

Automatic dual-zone climate control is yet another optional feature. Consumers can also choose to replace the front bench seat with two fabric-trimmed bucket seats. These come with 10-way power adjustment for the driver's seat. The passenger's seat does not get an upgrade. Also available as part of a package is the Smart Key system which also adds a push-button start feature.

While the SR has a fixed rear window, the SR5 has a sliding horizontal one with privacy glass instead. A rear under-seat storage compartment is added to the list of standard equipment. The infotainment system gets upgraded to an 8" touchscreen. Double cab models of the SR5 have seven speakers, while crew cab models get nine. Dynamic navigation becomes an available option.

Two driver assistance aids become unlocked by the SR5. First up is front and rear parking sensors. The second is a blind spot monitor that features rear cross traffic alert.

The SR5 can add the TRD Off-Road Package. This is specifically made for the SR5 and adds trail-tuned shocks, upgraded alloy wheels, the skid plates, and the tow hooks. There is also a Sport package available for this trim. It gives the Tundra SR5 20" wheels, upgraded shocks, black sport trim on LED fog lights, and other touches to make the truck look more athletic.

All-in-all, the SR5 has a lot more going for it than the SR and will likely attract more consumers.

Compare the 2020 Toyota Tundra SR5 vs Limited Trims.  What is the difference?

The next option for drivers is the Limited trim. It is still available with either the double or crew cab but loses the option of the long 8.1-ft bed. Standard for the Limited trim are 20" wheels. The headlights and fog lights are upgraded to LED.

A deck rail system with four adjustable tie-down cleats, which was optional on the SR and SR5, becomes standard for this model. The side mirrors are heated and chrome rather than black. Also chrome are the door handles, which gain a touch-sensor lock and unlock feature. The larger 38-gallon tank becomes standard.

On this trim, the automatic dual-zone climate control and front bucket seats are standard. The bucket seats are heated and leather-trimmed. Also getting a leather-trim is the steering wheel. Push-button start and the Smart Key system are also included automatically when drivers go with the Limited trim level. Navigation is also now a standard feature.

The Limited trim level adds a good deal of luxury with its heated seats and automatic climate control. At the same time, it also adds quite a bit to the price tag.

Compare the 2020 Toyota Tundra Limited vs Platinum Trim Levels.  What is the difference?

For the Platinum trim, drivers still have a choice between rear-wheel-drive and a 4x4 vehicle. This trim is only available with a crew cab and the short 5.5-ft bed. The wheel size remains 20" but they feature six spokes rather than the five found on the Limited trim.

Setting this trim apart is a black honey-combed front grille. The side mirrors are chrome and add an auto-dimming feature in addition to turn signals. Both the driver and front passenger door get a special "Platinum" badge. Inside, the front seats are perforated leather and gain ventilation on top of the heat. The driver's seat now has 12-way power adjustment with two-way lumbar support and the front passenger gets six-way power adjustment.

The audio system gets upgraded to a 12-speaker one. This system includes both an amplifier and a subwoofer. A sunroof now becomes an optional feature. Both the parking sensors and the blind spot monitoring features are now standard.

Going up from the Limited to the Platinum will cost consumers approximately five thousand dollars but will give them some luxurious features.

Compare the 2020 Toyota Tundra Platinum vs 1794 Edition. What is the difference?

The 1794 Edition is based on the Platinum. It also only has the 5.5-ft bed length and crew cab. The wheels are the same but the 1794 Edition has the option of upgrading to 20" ones that feature chrome-cladding. All-season and all-terrain tires, which were not available for the Platinum, become an option once again.

There is a special "1794 Edition" badge on the driver and front passenger doors. Inside, the steering wheel gets wood-grain accents. The same is true of the gear shift lever and console. For the seats, this trim adds saddle brown leather. Overall, the 1794 Edition is meant to have a Western flair.

This trim level does not cost any more than the Platinum. Ultimately, it comes down to which type of style the consumer prefers.

Compare the 2020 Toyota Tundra 1794 Edition vs TRD Pro Trims.  What is the difference?

Those who want to go off-roading will be interested in the TRD Pro. It is only available as a 4x4. Consumers can choose between a crew cab with a 5.5-ft bed or a double cab with a 6.5-ft bed. It gains a specialized TRD dual black-chrome tipped stainless steel exhaust system.

In order to boost the performance capabilities of this trim, Toyota gave it an upgraded suspension featuring larger shocks. A front skid plate becomes standard and the wheels are 18" forged aluminum, which helps make them lighter. It also has a slightly higher minimum ground clearance. This is the only trim to add the all-terrain tires to its list of standard equipment.

Drivers get TRD Pro bed stamping with this model. Front tow hooks are standard here as well. The door handles still have the touch-sensor feature but are black for the TRD Pro. Also distinguishing this trim from the others is a black 4x4 badge, 5.7L i-FORCE V8 badge, and Tundra badge.

Inside, the TRD Pro has unique black TRD Pro leather-trimmed bucket seats in the front. These seats have special red stitching. They lose the ventilation and the driver's seat goes down to 10-way power adjustment without any lumbar support. The sound system also goes back to the nine or seven speaker option, depending on which cab is selected. There are unique TRD Pro floor mats. This trim is the only one to give consumers a power horizontal sliding rear window.

A few safety features are lost by going with the TRD Pro. This model does not have the parking sensors or the blind spot monitoring. They are not even available as add-ons.

The TRD Pro is not going to be for everyone, but consumers needing a good off-roader would struggle to find a better one.

Skip the SR trim completely when it comes to the Tundra. The other trims have way more to offer. The SR5 is a decent option, but going up to the Limited trim is the way to go. It gives drivers standard navigation, dual-zone climate control, and many more highly-desirable comfort and convenience features.

Some consumers may prefer the Platinum or 1794 Edition. Most people, however, will find they can live without the ventilation for the seats and the optional sunroof if it means saving thousands of dollars. The TRD Pro will always have its fans, but the average driver will not need its upgraded performance features.

Selecting the Limited trim of the 2020 Toyota Tundra is a good bet for most consumers.

Save Money on a 2020 Toyota Tundra:
Find New Car Clearance Prices - Many Vehicles are Selling Below Dealer Invoice Prices.

Every dealer offers a secret price. Many prices are below invoice. Find yours here.
2020 Toyota Trim Level Buying Guides: