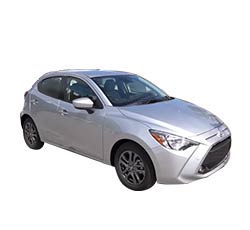 What 2020 Toyota Yaris Trim Level Should you Buy? What is the Difference Between Trims?

The Toyota Yaris seems like one of the company's newest vehicle models. Yet, it has been around in one incarnation or another for the last two decades. In 1999, the vehicle started out as the Toyota Echo in North America. By 2005, the name Yaris stuck across international lines.

For years, this subcompact's design was derived from the Toyota Vitz, a popular model sold in the Japanese market. With this model year, the focus has shifted. Now in its fourth generation, the hatchback version of the car takes its design chops from the Mazda 2. It shows with a redesigned interior, high fuel economy, and performance handling.

This guide demonstrates the key differences between the trim levels in order to help buyers decide on the right Yaris configuration that works best for their needs.

Compare the 2020 Toyota Yaris LE Hatchback vs. XLE Trim Levels.  What is the difference?

Throughout its history, Toyota has never gone cheap on features, even with their less-expensive subcompacts. Thus, no matter the trim, consumers should get the maximum amount of standard options for their budget.

Both the LE and XLE hatchbacks come standard with 1.5 Liter, 4-Cylinder, 16-Valve engines with intelligent Variable Valve Timing (VVT-i). This technology, introduced in 1996, varies intake valve timing to improve engine efficiency. In the end, this helps produce 106 horsepower and 103 pounds per foot of torque.

Both trims come with a six-speed automatic transmission with the ability to shift from normal to sport driving modes. They also have standard front-wheel-drive (FWD) operations. Since they are subcompacts, the hatchback trims compensate for weight and FWD setup with a stronger suspension system. The front end has MacPherson struts with a stabilizer bar while the rear of the vehicle has torsion beam suspension.

The mileage estimates for both trims are impressive, as they would be for a Toyota. On average, drivers get 32 mpg in the city and 40 mpg on the highway. Even with a 11-gallon fuel tank, these trims can travel almost 400 miles.

Driving-wise, the hatchback trims feature sport-tuned Electric Power Steering (EPS). As this form doesn't require a significant amount of power, turning and shifting lanes is much smoother. Along with power-assisted and ventilated brakes, the LE and XLE hatchback trims reach a turning diameter of 32 feet.

The exterior is where most of the differences are between the hatchback trims of the 2020 Toyota Yaris. While both have fog lights and rear combination taillights, only the LE has Halogen headlights. On the other hand, the XLE features integrated LED daytime running lights and auto on/off headlights. In another contrast, only the XLE features rain-sensing windshield wipers.

Among the design features standard to both trims are a front fascia with a mesh-pattern grille, rear spoiler, and 16-inch split-spoke alloy wheels. The door handles and outside mirrors, which are heated and feature LED turn signal indicators, match the color of the exterior.

The interior of the two trims is another location where differences are seen. For example, while the LE has air conditioning with a dust and pollen filter the XLE contains automatic climate control.

Another contrast is in the interior's upholstery. The LE's seats are fabric-trimmed while the XLE has leatherette-covered seats. In both trims, the front driver and passenger seats are adjustable at six and four-way increments, respectively.

The steering is also different. Though both trims offer a three-spoke wheel with manual tilt/telescopic adjustments, the XLE's version is leather-trimmed. Furthermore, it has built-in controls for audio, cruise control, and hands-free phone operations.

The multimedia components of these hatchback trims are not only the same but also match those of other manufacturers. The infotainment screen is seven inches with two USB ports. Along with a six-speaker system, it supports voice recognition, music streaming via Bluetooth, and is capable of integration with Apple CarPlay and Android Auto. The LE and XLE also feature a three-month all access trial for SiriusXM radio.

Also similar in the two trims are the safety options. Both come with six airbags for the driver and all passengers. The vehicle's Advanced Airbag System avoids deploying should the first-row passenger be of a certain weight.

Another feature of the hatchback trims is the Active Safety System. The technology in this setup includes traction and dynamic stability control, brake assist to apply pressure when a collision is imminent, and a brake override system. In addition, the hatchback's Low-Speed Pre-Collision system warns the driver when they are about to hit an object or another vehicle.

Finally, there's no difference in warranty coverage between the two trims. The basic coverage is three years or 36,000 miles while the powertrain and restraint system are covered for five years or 60,000 miles. Rust protection is also five years; however, there is no mileage limit.

Upon examination of the two hatchback trims, the LE is the better value between the two. Yes, there are some additional luxuries to the XLE version of the 2020 Toyota Yaris. Nevertheless, they are small enough not to be worth the extra $1,000.

Compare the 2020 Toyota Yaris L Sedan vs. LE Sedan Trims. What is the difference?

The sedan version of the Yaris has one major difference from its hatchback cousin -- other than the lack of a hatchback. The L and LE trims offer the consumer a choice of automatic transmission, which is standard, and a six-speed manual transmission.

Those who choose the manual version see three differences. First, the price of both trims drops $1,000 -- $16,000 and $17,000, respectively. Second, fuel efficiency drops. Where it's on par with the hatchback trims in automatic mode, it drops an average of one mile per gallon in its manual version. third normal and sport driving modes are eliminated.

After that, most of the contrasts between the L and LE trims are minor. For instance, the LE has fog lights while the L has color-keyed power outside mirrors. In another example, the L offers multi-function remote keyless entry while the LE has a Smart Key System with a push button start.

Overall, the LE is the better trim to go with for the sedan version of the 2020 Toyota Yaris. Though $1,000 more, it contains a number of higher-end features that consumers may be interested in.

Compare the 2020 Toyota Yaris LE Sedan vs. XLE Sedan Trim Levels.  What is the difference?

The primary difference between these two trims is the transmission option. Where the LE gives consumers the choice of automatic or manual, the XLE is an automatic-only model. Thus, the extra $1,000 in MSRP comes with heightened features.

On the exterior, the XLE trim comes with LED auto on/off headlights and LED daytime running lights. Another enhancement are the rain-sensing windshield wipers. On the inside, consumers get an automated climate control system and leatherette seats. They also have a leather-trimmed steering wheel with built-in controls for cruise control and hands-free phone operations.

The minor enhancements of the XLE trim don't merit an increase of $1,000. Furthermore, it's lack of a manual transmission option leaves it behind the LE trim. Hence, this is the reason consumers should go with the LE trim.

The decision needs to be broken down between the hatchback and sedan trims of this vehicle. Once that is done, a recommendation can be made on what Yaris form to choose.

Starting with the hatchback, the difference between the LE and XLE trims isn't much. In fact, since the L trim is no more, the remaining two are more high-end. Nevertheless, the price point of these subcompacts is low enough to put them on par with each other.

The main reason for the $1,000 in MSRP is based on a few enhancements to the XLE trim. Integrated LED daytime running lights, rain-sensing windshield wipers, and leatherette-trimmed seat upholstery are the main ones. Other than that, the performance of both trims is the same. Here, the LE is a better choice between the two hatchback trims.

So, it comes down to the LEs for a clear trim choice. First, cost is not the issue. Both versions over around the $18,000 price point without optional packages. Fuel efficiency isn't a deciding point either. The automatic versions get a combined average of 35 mpg.

Transmission option does matter. The LE hatchback only comes with an automatic. Some consumers may want it with a manual transmission. However, the only way to get that and the feature enhancements is through the sedan version.

The other item that might be a factor is cargo volume. Both the sedan and hatchback provide a 60/40 rear seat split. However, at its maximum, the LE sedan's capacity is 13.5 cubic feet. The LE hatchback's storage volume is almost 16 cubic feet. In addition, the hatchback allows for easier access to the cargo area.

In the end, the LE hatchback version of the 2020 Toyota Yaris is the best trim to select. Despite the lack of transmission choice, it still has the fuel efficiency, features, and price point that are appealing to consumers. Furthermore, the design overhaul that introduced the fourth-generation of the vehicle gives the hatchback a sleeker design that matches that of the sedan.

Of course, this guide is only a base to launch the consumer's shopping journey for a 2020 Toyota Yaris. Though there is plenty of information here, the best way for them to determine the right trim is to look at it themselves and take a test drive. After doing this, they may determine the manual version of the LE sedan is better than either hatchback. Or, they might go with the less or more expensive trims to satisfy their needs.

Whatever the choice, consumers should have a copy of this guide available. It comes in handy for two purposes. First, it provides the buyer with information they may not hear about from the salesperson. Second, it can help them reach a suitable deal price for the trim they have in mind.

Save Money on a 2020 Toyota Yaris:
Are you Shopping for a New Vehicle? Find the Best Deals with "Free - No Hassle" Prices Quotes.