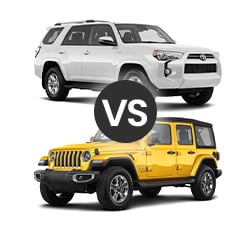 2021 4Runner vs Wrangler - What is the Difference Between Them? Which is Better?

Buying Tip: Before you walk into a dealership, price shop Online first. Avoid overpaying by using the following pricing services:
• Car Clearance Deals
• NADAguides
• CarsDirect
• Motortrend
With these services you can:
• Force dealers to compete for your business.
• Start your own online price war.
• Many prices are not advertised online.
• It's Free and No Obligation.

While crossover SUVs have become more popular than ever, they aren’t quite rugged enough for some drivers. Serious adventure seekers may need a traditional truck-based SUV. The 2021 Toyota 4Runner is definitely more than capable of handling of an off-road excursion. Another great option is the trail-ready 2021 Jeep Wrangler. Although these SUVs may share some common traits, they are also some stark differences between them. In this head-to-head comparison, we’ll find out whether the 4Runner or the Wrangler is the better choice.

Toyota only offers the 4Runner with a one powertrain. Motivating the SUV is a familiar V6 engine, which pushes out 270 horsepower. This engine is famous for its long-term durability. It provides plenty of muscle during real-world driving conditions.

Far more powertrain options are available for the 2021 Jeep Wrangler. A V6 engine with 285 horsepower comes standard. Buyers can step up to a turbocharged four-cylinder engine, which cranks out 270 horsepower. Drivers who desire better fuel economy may want the Wrangler’s EcoDiesel engine. Jeep rates it to generate a whopping 442-lb-ft of torque. New for 2021 is the limited-production Wrangler 392 Rubicon. This model receives a monstrous Hemi V8 engine with 470 hp and 470 lb-ft of torque.

With an estimated 0-60 mph time of 7.7 seconds, the 2021 Toyota 4Runner accelerates quickly enough. However, road tests show the two-door Wrangler Sport can clock a much quicker 0-60 mph time of 6.1 seconds. Although the four-door Wrangler Unlimited is not quite as quick, it still scampers to 60 mph in 7.3 seconds.

Thrill seekers will especially love the all-new Wrangler 392 Rubicon. It rips a 0-60 mph time of 4.5 seconds. No other Wrangler in history comes close to offering as much performance. The 4Runner simply can’t compete with this high-powered model. Another newly available option is Wrangler 4xe. This plug-in hybrid model develops an impressive 375 horsepower while still prioritizing fuel effiency.

When it comes to towing capabilities, the 4Runner comes out on top. It’s rated to tow a maximum of 5,000 pounds. On the other hand, Jeep lists the four-door Wrangler with a 3,500-pound towing capacity. Two-door Wrangler models can only handle a 2,000-pound load. This could be a factor for drivers who have fishing boats and camping trailers.

The edge is fuel economy goes to the Jeep Wrangler. Even the V6-powered Wrangler can deliver up to 20 mpg town/24 mpg freeway. Expect trims equipped with a turbo four-cylinder engine to be a tad more frugal in the city. Opting for the EcoDiesel engine further increases efficiency to 22 town/20 mpg freeway. Keep in mind that the hybrid-powered Wrangler 4xe benefits from a 25-mile electric driving range. This allows drivers to make short trips without consuming any gas.

4Runner owners will have to spend more money on fuel. They can expect the SUV to return roughly 16 mpg town/19 mpg freeway. Most SUVs in the segment are better on gas. Luckily, premium fuel is not needed.

Neither of these SUVs ranks among the class leaders in the handling department. However, the 4Runner does inspire more confidence. An independent front suspension helps the 4Runner to perform better when taking curves. Toyota also equips the more luxurious 4Runner Limited with softer street tires. Because of the Wrangler’s solid rear axles, it’s not quite as agile on the road. Toyota’s available Kinetic Dynamic Suspension further reduces body lean.

Like the Toyota 4Runner, the Jeep Wrangler is known for its sensational off-road capabilities. While the 4Runner offers two trail-ready trims, most experts agree that the Wrangler is even more skilled at tackling rough terrain. An electronically disconnecting front sway bar helps optimize the Wrangler Rubicon’s front ground clearance. Front and rear locking differentials also take the SUV’s traction to the next level. Although some 4Runner trims come standard with a 4WD system, every Wrangler trim is equipped with four-wheel drive.

For decades now, the 4Runner has remained among the most dependable SUVs you can buy. It has a 4.0 out of 5.0 dependability rating, which is very good. Meanwhile, experts give the Wrangler a below-average dependability rating. Both SUVs come with a standard 60,000-mile powertrain warranty and 36,000 miles of bumper-to-bumper protection. However, diesel-powered Wrangler models benefit from a longer 100,0000-mile powertrain warranty.

Like the majority of pickup trucks, these SUVs feature body-on-frame construction. While this quality may add an extra degree of toughness, it also results in a bumpier ride. Nevertheless, the 2021 Toyota 4Runner does offer the best overall ride. When traveling in the 2021 Jeep Wrangler, passengers can expect to feel more jolts when encountering rough roads.

The Jeep Wrangler has never been known for having a quiet interior. A fair amount of wind noise tends to enter its cabin at highway speeds. Drivers may also hear some noise from the SUV’s knobby tires. While the Toyota 4Runner is far from being the quietest model in the segment, its cabin isn’t as noisy.

Forward visibility in the 4Runner is excellent. Drivers will be able to scan the entire road with ease. Rear visibility is about average for the class. While it’s easy to see out of the Wrangler’s front windshield and side windows, some owners have complained about the SUV’s rear visibility.

In terms of passenger comfort, these SUVs are evenly matched. The four-door Wrangler Unlimited provides noticeably more rear legroom. However, only the 4Runner offers reclining rear seats for a more relaxing ride. Car reviewers also consider the 4Runner’s seats to provide the most support. While the Wrangler can accommodate up to five people, an optional third-row seat enables up to 7 people to fit inside the 4Runner.

There’s more cargo space in the 4Runner. It provides 47 cubic feet of cargo space in the rear. By comparison, the Wrangler offers up to 32 cubic feet of cargo space. Expect the two-door Wrangler to offer significantly less storage space with the rear seats erect. While neither SUV offers a hands-free liftgate, a power rear window is offered on the 4Runner. Families can grab items without needing to open the tailgate.

While both SUV offers a user-friendly infotainment system, the 4Runner comes standard with a far better unit. Even the entry-level 4Runner receives a 7.0-inch touchscreen with smartphone integration. A much smaller 5.0-inch touchscreen comes standard on the Wrangler. This basic interface also lacks Apple CarPlay and Android Auto smartphone integration. Amazon Alexa is exclusively found on the 4Runner, thus enabling drivers to access their phone’s functions by making verbal commands.

When crash-tested by the NHTSA, the 2021 Toyota 4Runner received a four-star overall safety rating. It does not provide as much front impact protection as some other models. This SUV also receives just an average rollover rating.

The 2021 Jeep Wrangler has yet to receive an NHTSA safety score. However, this vehicle receives a “Poor” rating from the IIHS for its subpar headlight performance. While the Wrangler’s optional LED headlights enhance visibility at night, they are still not the best.

While the Wrangler may not come standard with any advanced safety technologies, automatic braking and adaptive cruise control are on its list of optional features. Furthermore, only the Wrangler offers blind-spot monitoring. This active safety technology greatly enhances the drivers sense of awareness on fast-paced highways. Rear cross-traffic detection is built into the system, which warns you of vehicles when backing up.

What Has the Best Value?

The base Wrangler Sport does bring a lot of value to the table. Buyers stand to save more than $3,000 by choosing the Wrangler over the 4Runner. However, a less pleasing infotainment system is found on the base Wrangler. Far more standard safety technologies also come equipped on the 4Runner.

Both of these SUVs has some clear highlights. Like the 2021 Toyota 4Runner, the 2021 Jeep Wrangler can topple challenging terrain. These vehicles also provide enough space for families.

The Wrangler has the potential to offer the most driving fun. Expect the high-performance Wrangler 392 Rubicon to be a hot commodity. Its blistering acceleration is bound to get your blood flowing. Remember, only the Wrangler features a removable roof and detachable doors. These features enable outdoor lovers to experience more open-air fun.

These SUVs look completely different. The Wrangler is among the most recognizable SUVs on the street. Everyone will notice its boxy shape and signature front fascia. Several appearance upgrades are also available for the Wrangler. Many drivers will also like the 4Runner’s muscular styling.

When it comes to interior quality, the Wrangler outclasses the 4Runner. Many car reviewers describe the 4Runner’s interior as being a bit dated. It feels more like a 2015 model as opposed to a 2021 model. There are a number of cool touches inside the new Wrangler. Better interior materials give the Wrangler another edge.

A big weakness for the 4Runner is its below-average fuel economy rating. Even when cruising along the interstate, it may fail to average 20 mpg. The Wrangler will definitely be less expensive to refuel.

To decide which one of these vehicles is the better choice, car shoppers must take a closer look at the pros and cons. While the Jeep Wrangler’s removable roof and exceptional off-road capabilities are appealing, some drivers will ultimately prefer the Toyota 4Runner’s better ride and handling. Great long-term reliability also makes the 4Runner a good investment for buyers.

Save Money on a 2021 Toyota 4Runner:
Find New Car Clearance Prices - Many Vehicles are Selling Below Dealer Invoice Prices.

Every dealer offers a secret price. Many prices are below invoice. Find yours here.
In Depth 2021 Toyota 4Runner Comparison Guides: