2021 Toyota Avalon Pros vs Cons. Should You Buy? 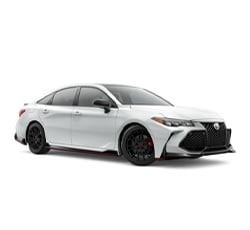 Should You Buy a 2021 Toyota Avalon? Here Are Some Reasons For and Against

These days, it seems like there are more SUVs and crossovers on the roads and less sedans. While this is true, there is one sedan that's still going strong. The Toyota Avalon has been around for awhile, and it continues to be a leader in its class. It has a comfortable, nicely appointed cabin, and it has many modern amenities. The 2021 Toyota Avalon would be a smart move if anyone is looking for a full-size sedan.

A notable addition to the Avalon's features for 2021 is available all-wheel drive. This helps it compete with some of the SUVs in the market in terms of capability, and it helps the sedan appeal to drivers who have to deal with wintry conditions. Besides adding this type of drivetrain, Toyota has made some other enhancements. First, Android Auto gets to be part of the infotainment system. Also, the hybrid version of the Avalon benefits from having a more compact battery pack that allows more room for other components. Finally, the XSE can come with the Nightshade Edition appearance package, which consists of black wheels and black exterior accents.

Under the hood of a new Toyota Avalon, there could be one of three powertrains. The first choice is a 2.5-liter engine that has four cylinders. It can generate a little over 200 horsepower, along with 185 pound-feet of torque.

The second choice is much more powerful, as it consists of a V6 engine with a displacement of 3.5 liters. With this engine, the Avalon has 301 horsepower and over 250 pound-feet of torque. This would definitely make for a thrilling drive, even if someone is just headed to the office or the store.

Finally, there's a hybrid model that uses a 2.5-liter engine and an electric motor. The total horsepower provided by these two sources is 215 horsepower. Considering that it wasn't too long ago when hybrids weren't considered to be very capable, the hybrid Avalon does great in this department.

2. Save Gas With the Hybrid Option

It's hard to pass up a car that can get more than 40 miles per gallon. The hybrid versions of the Avalon can earn up to 44 miles per gallon in the city and 43 miles per gallon on the highway. This means that trips to the gas station would be few and far between. There's a modest price jump when moving from a non-hybrid trim to a hybrid one. Depending on someone's driving habits, this price increase could easily be made up for in a relatively short amount of time through savings in fuel consumption.

Leg room in the front row is 42.1 inches, and this is on par with what many other vehicles have to offer. It's the leg room in the second row that really sets the Avalon apart from most other sedans and even many SUVs. Rear-seat passengers will appreciate having more than 40 inches of leg room. Three adults would likely be fine sitting in the back together, even for long road trips.

All-wheel drive isn't commonly found in sedans, but fortunately, the 2021 Toyota Avalon has it. All-wheel drive is an available option, provided the Avalon runs on the 2.5-liter engine. The trade-off between having less horsepower but gaining all-wheel drive is going to have to be a consideration for consumers. Most likely, people who frequently deal with snow and ice will go with all-wheel drive, since the additional traction it provides can be very useful.

5. One of the Leaders in Safety

In recent years, Toyota has shown how committed it is to protecting its passengers. In the Avalon, there are a number of advanced mechanisms in place to keep people safe. Blind spot monitoring and rear cross-traffic alert are both standard. This is notable, as most vehicles only offer these systems on their higher trims.

In addition, each Toyota Avalon has a pre-collision braking system that detects vehicles and pedestrians, a lane departure warning program that can gently correct steering if necessary, high beams that can turn themselves on and off according to the light conditions, and an advanced cruise control system that can adjust speed in order to maintain a safe distance from other vehicles. Some models have an available braking system that prevents drivers from backing out into traffic. It can be so reassuring to have an extra pair of eyes looking out for problems on the road.

Every trim of the Avalon comes with a nine-inch touchscreen. This is a pretty generous size, and it makes it easy to see the words on the screen. The standard multimedia package includes a subwoofer, amplifier, multiple charging ports, smartphone compatibility, and SiriusXM Satellite Radio. It also includes Amazon Alexa, making a lot of things much more convenient. Higher trims are upgraded with JBL speakers as well as integrated navigation. What's great is that this upgraded package is an option on all trims.

To be honest, sedans aren't the most exciting type of vehicle. They're all about practicality, but that doesn't mean they have to be boring or unattractive. The 2021 Avalon feels quite modern and makes a solid first impression. It has multiple LEDs in its various exterior lights, and its front grille looks sporty and sophisticated. Some trims have gloss-black accents, and some have a black metallic roof to give them an edgy, two-tone design.

In a Toyota Avalon, people might feel like they're in a vehicle made by a luxury brand. Rather than starting out with cloth seats, the Avalon features SofTex seats on its lower trims. SofTex is a synthetic leather that can be considered a premium material. Higher trims are decked out with leather seats. Available on the Avalon are heated and ventilated front seats, heated rear seats, and a heated steering wheel. Plus, there could be aluminum or wood trim to give the cabin a more elegant ambience. All of these components should be able to attract a lot of customers to the Avalon.

If anyone wants to drive a more unique car, there's the TRD trim. It has a lot of the same features as the other Avalon models, but it offers a little extra in terms of style. For instance, it has aluminum pedal covers that are similar to what some sports cars may have, floor mats and a shift knob decorated with the TRD logo, red accents in the cabin, exterior red pinstriping, and special badging on the outside of the car. These all give the TRD a bold personality.

The Avalon has a good-sized trunk that makes it suited for a variety of situations. The trunk has a volume of over 16 cubic feet, so it would be perfect for everything from sports gear to suitcases. In the event that someone has larger items to transport, the rear seats can be folded down to create more room.

Reasons Not to Buy a 2021 Toyota Avalon – The Cons

Some consumers may be surprised that the Avalon has such a high starting price. The base model, which is the XLE trim, starts out at over $35,000. This is out of the price range of many people, who may need to keep their costs below $30,000. For the higher trims, customers can expect to pay well more than $40,000. This is in the ballpark of what some luxury sedans cost, and it may not be reasonable for a majority of consumers.

2. Non-Hybrid Efficiency Could Be Better

It's important for some drivers to watch their spending at the gas station. This may be because of budget concerns, environmental concerns, or both. The non-hybrid Avalon doesn't do poorly with its fuel economy, but it could do better. The standard versions of the Avalon can achieve a combined 28 miles per gallon. It would have been great to see that combined fuel economy be at least 30 miles per gallon.

The Sonata is a pretty comparable sedan to the Avalon, but it's not as big. There is a pretty significant difference in second-row leg room between the two models, with the Avalon having the larger cabin. This can be a key factor for anyone who frequently transports a full load of passengers. One other thing is that the Avalon's touchscreen is one inch larger than that of the Sonata, and this may be noticed by tech-minded consumers.

The 2021 Toyota Avalon has a lot of appealing qualities. It's safe, packed with technology, and comfortable to ride in. It has a lot of power under its hood, and there are several options for the powertrain. Though it has a relatively high cost, people can expect to be rewarded for their investments in the Avalon. It's a car that someone can rely on and enjoy driving for many years.


Save Money on a 2021 Toyota Avalon:
Are you Shopping for a New Vehicle? Find the Best Deals with "Free - No Hassle" Prices Quotes.