2021 Toyota Corolla Hybrid Pros vs Cons. Should You Buy? 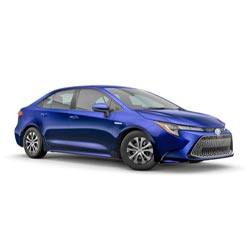 Should You Buy a 2021 Toyota Corolla Hybrid? Here Are Some Reasons For and Against

As an affordable hybrid sedan, the 2021 Toyota Corolla Hybrid has a coveted spot in the automative market. These days, it seems like more customers are looking to get energy-efficient vehicles for a few key reasons, and the Corolla Hybrid can attract a lot of attention by being a name brand. It's also a sedan that would interest people who want something reliable and safe. While it might not be the most exciting vehicle available, it does meet a lot of customers' criteria as they shop for new cars.

The car now comes with Android Auto in addition to Apple CarPlay, and this should make the non-iPhone users happy. Also, there have been some improvements to the safety package that should give drivers extra peace of mind. The Corolla Hybrid was only introduced to the market in 2020, so it seems as if Toyota didn't want to move too quickly to change things. The 2021 model year is part of the 12th generation of the Corolla. This number of generations goes to show that the Corolla has been a popular vehicle for decades.

The bottom line is that the Corolla Hybrid is priced very competitively. For those people with a limited budget or who are always looking for a good deal, this will make the Corolla Hybrid quite appealing. Its starting price is only $23,400, making it much cheaper than many other hybrids. To provide some extra information for clarity, the Hybrid is about $3,000 more expensive than the Corolla LE, with which it shares most features. It's slightly more expensive the Corolla SE, and it's cheaper than the XLE and higher trims.

2. Its Efficiency is Hard to Beat

The 2021 Corolla Hybrid can drive over 50 miles on a single gallon of gas. Since the fuel tank capacity is 11.4 gallons, drivers will be pleased at how far they can travel before having to fill up. The Corolla Hybrid can achieve an estimated 53 miles per gallon in the city and 52 miles per gallon on the highway. It's able to do so because it uses electric motors in addition to a 1.8-liter engine to generate power. This engine has four cylinders, and it's matched to a continuously variable transmission.

Sedans are practical vehicles, but some might be concerned about how much cargo they can hold. Fortunately, the Corolla Hybrid has a trunk with a volume of 13.1 cubic feet. This should be enough space for most road trips and for running errands around town. Because the rear seatback is configured as a 60/40 layout, there is more versatility. Long pieces of cargo, like skis or snowboards, could likely be accommodated.

As one would expect from a Toyota, the Corolla Hybrid comes with many convenient features. Standard on this car is automatic climate control, and it comes with a dust and pollen filter. The doors automatically lock when the vehicle hits a speed of 12 miles per hour, and the driver can operate all four windows with a one-touch automatic up/down function. A center console provides a place to store smaller items. The rear center seatback can double as an armrest with cup holders.

This car is equipped with Toyota Safety Sense 2.0. This package of safety features includes high beams that can turn themselves on and off, pre-collision braking that can detect vehicles and pedestrians, a system that can keep the Corolla centered in its lane, and an advanced cruise control program that can adjust vehicle speed when necessary. Available on the Corolla Hybrid is a blind spot monitor, and it comes with rear cross-traffic alert to help people safely back out of parking spots.

Since the Corolla Hybrid isn't the quickest off the line, it was a nice touch for Toyota to add Hill Start Assist to its list of features. This system can kick in when the car is stopped on an incline. When the driver takes a foot off the brake pedal before hitting the gas pedal, pressure on the brakes can continue to be applied (for about two seconds) so that the car doesn't roll backwards.

For such an affordable car, it may be surprising that the Corolla Hybrid has LED headlights, LED Daytime Running Lights, and to top it off, LED taillights and stop lights. In the front, there's a black grille with a sport mesh insert that adds to the aerodynamic look of the car. The Corolla sits low to the ground, having a clearance of 5.3 inches, and it has a modern shape with a nice combination of angles and curves.

An eight-inch touchscreen can be found on the Toyota Corolla Hybrid. The car is compatible with Android Auto, Apple CarPlay, and Android Auto, and it comes with SiriusXM Satellite Radio. Bluetooth makes it easy to stream music and make hands-free phone calls.

The Corolla Hybrid is built to accommodate five people, and it does so pretty well. There is 42 inches of leg room in the front and nearly 35 inches in the back. Three adults sitting shoulder to shoulder in the back would fit fine.

This Toyota uses a Smart Key System for easy entry. Both front doors are equipped with this technology. With this system, a driver can walk up to the locked car and simply touch the door handle to unlock it, provided the key is somewhere nearby. The car can be locked in a similar fashion. The key fob has a trunk-release button, and the key doesn't have to actually be inserted in the ignition because the Corolla Hybrid has push button start.

Reasons Not to Buy a 2021 Toyota Corolla Hybrid – The Cons

Toyota has limited the number of trims of the Corolla Hybrid to just one. While some might simply be satisfied that there's a hybrid option in the first place, the lack of options could leave people underwhelmed. It would have been nice if there was at least one other Corolla trim available with a hybrid powertrain. Since the LE is towards the lower end of the spectrum when looking at the Corolla trims as a whole, it seems possible that there could have been a XLE Hybrid version to attract people who want to spend a bit more in exchange for having more amenities.

Navigation is a key feature in many vehicles' infotainment systems. Sure, people can look up directions on their phones, but it's so easy and convenient to use a vehicle's touchscreen to do so. By not offering navigation with the Corolla Hybrid, Toyota might be pushing some tech-lovers away.

The 2021 Toyota Corolla Hybrid would not be the vehicle to get for any drivers who love the feeling of acceleration. The Corolla Hybrid only comes with 121 horsepower and 105 pound-feet of torque. It's enough power to get the car up and running, but it doesn't make for an especially fun drive. At times, the Corolla Hybrid can feel like it's struggling to reach highway speeds or climb hills. Some of the other Corolla trims have Sport driving mode to make things more responsive, but unfortunately the Hybrid trim does not.

To the cheers of consumers who want to have more efficient choices, the industry has made a lot of progress in this field. There are several competitors to the Toyota Corolla Hybrid, but the Toyota does well in the matchups.

There are several trims of the Toyota Prius, all of which are priced higher than the Corolla Hybrid. The Prius does have more space since it has a hatchback style, but some people prefer the traditional look of a sedan. It's almost like the Corolla Hybrid is a hybrid in disguise, which is exactly what many customers are looking for. Also, the Prius starts out with a seven-inch touchscreen in comparison to the Corolla's eight-inch touchscreen.

Hyundai is a brand that makes a car similar to the Corolla Hybrid. Its Ioniq model costs about the same as the Corolla Hybrid. Like the Prius, the Ioniq has a distinct hatchback style that could be described by some as futuristic. There are a few standard features on the Corolla Hybrid that are only options on the Ioniq, and those include automatic high beams, heated outside mirrors, and auto up/down windows.

The Toyota Corolla Hybrid has experienced success in its first years in the market. The 2021 model year looks stylish, incorporates modern technology into the cabin, and has a comprehensive safety package. Of course, its efficiency is its primary selling point. It can particularly appeal to people who don't want to spend too much on their next vehicles and don't want to sacrifice safety or reliability.


Save Money on a 2021 Toyota Corolla Hybrid:
Are you Shopping for a New Vehicle? Find the Best Deals with "Free - No Hassle" Prices Quotes.