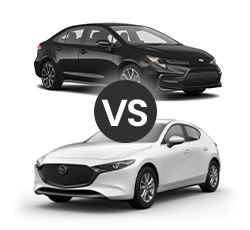 Affordable yet sporty compact cars have a certain appeal to drivers. Two heavy-hitters in this category are the 2021 Toyota Corolla and 2021 Mazda 3. Both of these vehicles are available in sedans and hatchback body styles.

In 2021, the Corolla finally gets Android Auto capability to go along with Apple CarPlay. Rear-side-mounted airbags are now standard, meaning the Corolla now has ten total. An Apex Edition model also debuts this year, with unique exterior features and an available manual transmission. Models with the manual will be incredibly hard to come by, however.

The primary changes for the Mazda 3 in 2021 involve the available engines, with a more powerful option now available on top trims. Mid-level Preferred models now get a sunroof standard. On the other hand, they no longer come with satellite radio and navigation like in years past.

Both the Corolla and Mazda 3 are applauded for coming standard with a wide variety of features. Beyond that, these vehicles have significantly different strengths and weaknesses. The following information can not only help buyers choose between these two cars, but potentially which body style they will be better served by.

The standard engine for sedan Corolla models is a 1.8L four-cylinder that makes 139-horsepower and 126 lb-ft of torque. Buyers who choose the SE or XSE sedan will get a 2.0L four-cylinder engine instead that creates 169-horsepower and 151 lb-ft of torque. This is the standard engine for all hatchback models, although it loses a single horsepower when underneath the hood of these Corollas.

With the standard engine, buyers get a continuously variable transmission. Even those who typically do not like CVTs will admit that the one in the Corolla is smooth and quiet. The larger engine opens up the possibility of having a six-speed manual.

When it comes to the Mazda 3, there are now three different engines. The base model sedan has a naturally-aspirated 2.0L four-cylinder that makes 155-horsepower and 150 lb-ft of torque. Next up on the trim ladder is the Mazda 3 2.5, which unsurprisingly has a 2.5L four-cylinder engine. It makes 186-horsepower along with 186 lb-ft of torque and can be had in sedan or hatchback models. Last year, this was the only powertrain available for the Mazda 3.

Top trim levels of the Mazda 3 now get a turbocharged 2.5L four-cylinder engine that makes up to 250-horsepower and 320 lb-ft of torque when they are using premium fuel. A six-speed automatic transmission is standard in nearly all models. The only exception is hatchback Premium models, which get a six-speed manual instead.

All models of the Corolla are front-wheel drive. This drivetrain is also standard for the Mazda 3, but an all-wheel drive is also on the table for this car, making it a unique offering in its vehicle class. Any model with the most powerful engine will also come standard with AWD.

Those who go with the entry-level Mazda 3 sedan can expect 28mpg in the city and 36 mpg on the highway. The hatchback with the 2.5L engine is estimated to get 26mpg city and 34mpg highway. Models with the more powerful engine and all-wheel drive can get as low as 23mpg city and 31mpg highway, depending on options.

JD Power rates new vehicles on their predicted reliability, using a scale that goes up to 100. The 2021 Corolla received a score of 80, which puts it in the "average" range, but only one point shy of "great." As for the 2021 Mazda 3, it got a score of 74, putting it firmly inside the "average" range.

A three-year or 36,000-mile limited bumper-to-bumper warranty is standard for both the Corolla and the Mazda 3. They also give consumers a five-year or 60,000-mile powertrain warranty. These coverages are fairly typical in the car world.

The Corolla is balanced as far as handling goes. When it comes to comfort, the sedan does a better job than the hatchback of absorbing impacts from the road. While the standard engine is adequate and the turbocharged one offers strong acceleration, no one would accuse the Corolla of being terribly fun to drive. Minimal road noise will make its way into the cabin.

At the same time, the Mazda 3 leads the compact car class when it comes to driving dynamics. The steering is responsive and offers just the right amount of feedback from the road. This compact car corners beautifully in both its sedan and hatchback forms. Like the Corolla, the Mazda 3 isolates its cabin from wind and road noise quite well.

The Corolla does a relatively good job of providing passenger space in its backseat. That said, taller people will find it a bit cramped. The front seats of the Corolla are more generous, although rivals offer more space and support. Cloth upholstery is standard, and a variety of upgrades are available on higher trims. Buyers can get things power adjustment for the driver and heated front seats.

One of the rivals who offers more space is the Mazda 3, which has plenty of head and legroom in its front row. Once again, however, the backseat is tight. The materials in the Mazda 3 are upscale and include multiple soft surfaces. Genuine leather upholstery and heated front seats are available for higher trim levels.

Toyota puts the Entune infotainment system in the 2021 Corolla. It now includes Android Auto on top of Apple CarPlay. The standard touchscreen size is 7-inches, although an 8-inch option is also available. Select Corolla models also have a 7-inch digital driver information display, HD radio, and navigation system. The standard stereo comes with six speakers. Music lovers can upgrade to a nine-speaker JBL system instead.

At first glance, the Mazda 3 seems to have a better technology setup. It comes standard with an 8.8-inch touchscreen and an eight-speaker stereo system. However, the base model is noticeably lacking Android Auto and Apple CarPlay. The Mazda 3 is also missing a Wi-Fi hotspot and Amazon Alexa compatibility, things that come standard in the 2021 Corolla.

When it comes to standard safety features, the Corolla has a more impressive list. It has a forward-collision warning, lane trace assist, traffic sign recognition, pedestrian detection, and automatic emergency braking. Both automatic high beams and adaptive cruise control, popular features for reducing driver strain, come standard as well. Available on select trims of the 2021 Corolla are extras such as adaptive headlights, blind-spot monitoring, and rear cross-traffic alert.

The Mazda 3 comes with rain-sensing windshield wipers, automatic high beam, and adaptive cruise control. It also has a lane departure warning and a driver attention monitoring system. Most of the Corolla's standard and available features can be found on select Mazda 3 models, including adaptive headlights, traffic sign recognition, and blind-spot monitoring. The Mazda 3 further adds an optional surround-view camera system to the table.

Of course, vehicles have more expenses associated with them as time goes on. To determine which has the better value, a five-year cost-to-own should be analyzed. The following information pertains to the entry-level sedans of both vehicles.

A 2021 Corolla sedan will cost drivers approximately $17,220 out of pocket. This number includes maintenance, repairs, fuel, insurance, and more. During a five-year span, the Corolla is estimated to lose $11,292 in value. Added together, the five-year cost-to-own is $28,512. In other words, it will cost approximately $0.38 per mile to drive.

Out-of-pocket expenses for the Mazda 3 are a bit higher, estimated to come in at $18,164 in the first five years. One of the main reasons that it will cost more than the Corolla is fuel efficiency. The Mazda 3 sedan with its base engine will also lose approximately $11,342 in value. In total, the cost-to-own is $29,506, or $0.39 per mile.

Both of these compact cars have above-average price tags. The Toyota Corolla justifies it with its long list of driver aids and technology features. On the other hand, the entry-level Mazda 3 is more powerful and has the more upscale cabin. Which vehicle has the better value may depend on a driver's priorities. The cost-to-own estimates are so close that they do not make a compelling reason for or against either vehicle.

The 2021 Toyota Corolla is a well-rounded vehicle with plenty of standard equipment. Those who are after something for their small family will enjoy this option for its safety features. Its fuel efficiency is also quite appealing.

Ultimately, however, those who are shopping in this segment of the market are typically looking for a fun experience at the wheel. For that reason, the 2021 Mazda 3 is the better vehicle. It has three engaging engine options, including a turbocharged one that provides heart-pounding acceleration. The Mazda 3 also has more engaging driving dynamics, as well as the option of going with all-wheel drive.

Save Money on a 2021 Toyota Corolla:
Are you Shopping for a New Vehicle? Find the Best Deals with "Free - No Hassle" Prices Quotes.