2021 Toyota Corolla Pros vs Cons. Should You Buy? 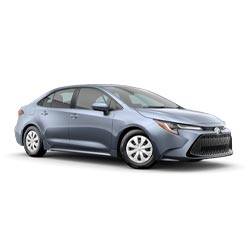 Should You Buy a 2021 Toyota Corolla? Here Are Some Reasons For and Against

The Toyota Corolla is known as one of America’s favorite compact cars. Last year, it received a much-need redesign. Drivers appreciate the latest generation’s improved performance and nicer interior. Budget-friendly pricing makes the Corolla the perfect alternative to the midsize Toyota Camry. Should you choose the new 2021 Toyota Corolla over the competition?

To bolster the Corolla lineup, Toyota has added an all-new Special Edition hatchback model. A new Apex model has arrived as well, which is geared towards driving enthusiasts. It adds a track-ready suspension and a performance exhaust. Furthermore, every new Corolla now receives Android Auto smartphone integration.

While the latest Corolla has improved in virtually every category, it’s still an affordable vehicle. Prices for the base Corolla start at less than $21,000. This is a good deal for such a high-quality car. Estimated maintenance costs for the new Corolla are also rather low. Even college students should be able to afford the expense of keeping the car serviced. Because the Corolla has a reputation for being extremely dependable, drivers can ride without worrying about experiencing a sudden breakdown.

People who live an active lifestyle will prefer the hatchback version of the Corolla. From backpacks to scuba gear, a lot of extra stuff can fit inside the Corolla hatchback. College students will also be able to easily haul dorm supplies. While the standard model provides a decent 18 cubic feet of storage space behind the rear seat, a new Enhanced Cargo Space option has arrived for 2021. It replaces the spare tire with a repair kit, which increases the car’s total cargo space to 24 cubic feet.

3. Offers Far More Performance Than Before

The previous-generation Corolla was often ridiculed for its sluggish performance. Drivers can expect the new 2021 Toyota Corolla to feel more responsive. While the standard 1.8-liter engine is known for its long-term durability, many Corolla buyers will want the larger 2.0-liter. It’s rated by Toyota to kick out a fulfilling 169 horsepower and 151 lb-ft of torque. Although the current Corolla still isn’t a speed demon, owners can look forward to enjoying a rather zippy performance.

5. Among the Most Stylish Cars In the Class

The 2021 Toyota Corolla has the ability to turn heads. Even the base LE trim receives some cool exterior treatments, including a mesh grille and nice-looking LED headlights. Folks seeking a sportier car should direct their attention to the Corolla SE. Toyota equips it with twin exhaust outlets and a larger set of 18-inch performance wheels. A blacked-out version of the Corolla SE is available as well. Copper accents and a front spoiler set apart the more aggressive Apex model.

Drivers who need a fuel saver will be happy with the 2021 Toyota Corolla. Automatic models equipped with the standard engine can return 30 mpg in city traffic and up to 38 mpg when cruising at highway speeds. Surprisingly, fuel efficiency actually increases with the available 2.0-liter engine. According to the EPA, the stronger Corolla can deliver up to 40 mpg. A newly standard feature shuts off the car’s engine when idling in traffic, which conserves more fuel.

Like a lot of today’s other new cars, the 2021 Toyota Corolla comes standard with a touchscreen interface. Many drivers will appreciate the simple design of Toyota’s Entune infotainment system. Even users with no experience will quickly learn how to operate the system. There are even knobs to control the stereo, which helps ensure hassle-free operation while on the road. This year, Toyota has updated its Entune interface with standard Android Auto. Upper trim levels receive a larger 8.0-inch display.

Last year, the Corolla proved it offers excellent impact protection by earning a five-star overall safety rating. Expect the 2021 model to be just as secure. Toyota Safety Sense 2.0 is standard throughout the lineup. This collection of accident-avoidance technologies gives drivers more assurance. Some of the features including pre-collision warning with automatic emergency braking, pedestrian detection, active lane control, and radar cruise control. Blind-spot warning and turn-adapting headlights are on the list of options.

9. Plenty of Standard Features at the Base Level

Buyers who choose the base Corolla won’t be missing out on any big features. Drivers will love the standard Wi-Fi hotspot, which ensures a dependable connection to the web throughout the day. Meanwhile, voice recognition enables drivers to make verbal commands without taking their hands off the wheel. Other notable standard equipment includes Apple CarPlay/Android Auto smartphone connectivity, Bluetooth, and a six-speaker stereo.

A compelling sound system is finally available for the Corolla. The car’s optional JBL premium audio system comes with a total of nine speakers. Bass response is enhanced by a trunk-mounted subwoofer. Younger drivers will especially love the system’s powerful sound.

Reasons Not to Buy a 2021 Toyota Corolla – The Cons

1. Not Quite As Spacious As Before

While the new 2021 Toyota Corolla is still a practical family car, it’s not as spacious as before. The previous-generation model provided more head- and legroom in the rear. This could be an issue for taller families. Drivers who consider the Corolla’s cabin to be a tight fit should consider the midsize Toyota Camry.

Most automotive reviewers agree that the latest Corolla is more engaging to drive. This is certainly true for the all-new Apex model. However, some people will still desire a quicker car. Testers have clocked the 169-horsepower Corolla with a 0-60 mph time of 8.1 seconds. By comparison, the new Mazda 3 can scoot to 60 mph in as quick as 6.9 seconds.

The 2021 Toyota Corolla remains a front-wheel-drive car. While the Corolla will perform just fine in most weather conditions, snow may cause a bit of trouble. Toyota decided not to offer the new Corolla with all-wheel drive. A great pick for the winter is the new Subaru Impreza. It comes standard with Subaru’s prized Symmetrical AWD system.

Many people who buy a new 2021 Toyota Corolla will be traveling with their family and friends. Unfortunately, there are no rear USB ports in the Corolla. This makes it difficult for passengers to keep their phones and other electronic devices charged.

Owners shouldn’t expect the new Corolla to have a whisper-quiet interior. When traveling at speeds above 55 mph, there’s a fair amount of wind and road noise entering the cabin. As speed increases, drivers will hear even more outside noise.


How It Stacks Up to the Competition

The Honda Civic has always been one of the Toyota Corolla’s biggest foes. Reviewers give the new Civic top marks for its comfortable seats and quick acceleration. On the downside, some test drivers have found the Civic’s safety systems to be a bit too sensitive. Furthermore, the Civic’s styling isn’t everyone’s taste. A higher reliability rating gives the new Toyota Corolla yet another edge.

There’s no overlooking the Forte as one of today’s top contenders. Its 100,000-mile powertrain warranty and good amount of standard equipment will appeal to many car shoppers. The Forte GT also delivers a heavy dose of driving fun. While the Forte offers above-average reliability, expect the Toyota Corolla to be even more bulletproof. A softer ride also helps the Corolla to compete against the Forte.

In terms of overall sportiness and interior quality, the 2021 Mazda 3 ranks among the class leaders. Available all-wheel drive also prepares the Mazda3 to face wintry weather. However, passengers will have a bit more room in the Corolla. A manual transmission is also not available for the latest Mazda 3.

There many reasons why car shoppers should buy a new 2021 Toyota Corolla. For starters, no other car in the segment has a higher reliability rating. Every trim comes standard with thoughtful safety technologies. While the Corolla’s base engine gives up some performance, it produces enough power for daily commuting. Drivers who are looking to have fun should get the new Apex model with a manual transmission.


Save Money on a 2021 Toyota Corolla:
Are you Shopping for a New Vehicle? Find the Best Deals with "Free - No Hassle" Prices Quotes.