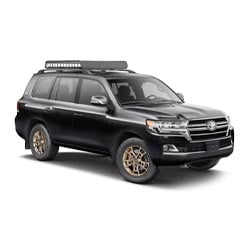 What 2021 Toyota Land Cruiser Trim Level Should you Buy? What is the Difference Between Trims?

The Land Cruiser is an iconic SUV known for its capability and unmistakable style. It's a vehicle that can easily go to the corners of the earth whether that involves venturing into the jungle to journeying through the grasslands. People who are looking into the Land Cruiser will likely have their own adventures in mind, and the vehicle is perfect for a variety of situations. With a huge engine and all kinds of components decided for the trails, the Land Cruiser can really move well even when the terrain is difficult to handle. Since it has a roomy cabin, it can carry plenty of passengers, cargo, or both.

Toyota only offers two trims with the 2021 Land Cruiser. The base model isn't cheap by any means, but for that price, it comes with many advantages. The Heritage Edition is a step above and feels much more customized. Its sophistication stands out in many ways.

Below, there will be a detailed overview of how the two trims differ. Before jumping into all of that, it first needs to be noted that both trims have many things in common. Of course, they share the same frame. The Land Cruiser towers over a lot of other vehicles with a height of 74 inches, and it has a ground clearance of almost nine inches. With an overall length of nearly 195 inches, it's long enough to accommodate a third row of seats.

Leg room in the front is a comfortable 42.9 inches. In the second row, people will have 39.4 inches of leg room. The optional third row is on the smaller size since there is only 28.3 inches of leg room, but this makes it great for kids.

For cargo, there is ample room. The dedicated space behind the third row of seats can hold just over 16 cubic feet of items. Folding down setbacks can greatly increase the storage opportunities. When the back row is folded down, people can take advantage of 41.4 cubic feet of space, and lowering both the second and third rows results in over 82 cubic feet of cargo capacity.

Powering the 2021 Toyota Land Cruiser is a V8 engine. This is similar to the components that many trucks have under their hoods. With a displacement of 5.7 liters, this engine will work hard for people. It can churn out 381 horsepower and 401 pound-feet of torque. People can easily haul a variety of cargo since the SUV has the ability to tow over 8,000 pounds. Toyota has paired the V8 with an automatic transmission that has eight different speeds.

Standard on the Land Cruiser is four-wheel drive. It's a full-time system that's always ready to adjust where it delivers power. To enhance performance, power will be sent to the wheels that have the best traction. In certain situations, drivers will want to set things up in a certain way, and they can do that with the locking feature on the Land Cruiser's 4WD system.

Built for tough terrain, the Land Cruiser comes with a Kinetic Dynamic Suspension System. It can be activated to better equip the vehicle to handle the roughest of roads, as it disconnects the sway bar that's usually engaged. There are different drive modes that people can select to make driving more optimal. Those modes include Rock, Mogul, and Loose Rock. Further, Crawl Control is used to make changes to the throttle and brakes when traveling at low speeds over bumpy terrain. Its complementary system, which is called off-road turn assist, helps the SUV take tighter turns.

Compare the 2021 Toyota Land Cruiser Base Model vs Heritage Edition. What is the Difference?

To sum it up, the base model of the Land Cruiser is not shabby by any means, but the Heritage Edition justifies its higher price point with many notable features. The details below will give prospective customers a better idea of which model to buy.

The base model has LED projector-beam headlights, as does the Heritage Edition. On the base model, the lights can adjust themselves depending on the angle that the SUV is in, and this can really be important when navigating through dark areas in the backcountry. The headlights can turn themselves on and off, they have their own cleaners to keep the light shining through, and they have great style with a Land Cruiser logo built into them. On the Heritage Edition, the lights have a dark housing to help them look more distinguished. Likewise, the LED fog lights on the Heritage Edition have a darkened chrome surround. The base model has those LED fog lights as well, but they have a chrome surround.

This theme carries through to other exterior features. The grille of the Heritage Edition has black inserts and a darker chrome surround that contrasts with the bright chrome surround of the base model. While the base model has color-keyed side mirrors, the Heritage Edition has black mirrors, again with the dark chrome accents. In both models, those side mirrors aren't just any mirrors, as they have turn signal indicators, can tilt down and fold in, can dim themselves to reduce glare, can be programmed to remember a driver's favorite position, and have cameras built into them. These components can be seen as an example of just how much Toyota has put into this SUV.

Both trims have a moonroof, a hands-free liftgate that almost seems to magically open up, and 18-inch wheels. The wheels on the base model have a split-spoke style, whereas the Heritage Edition's BBS wheels are bronze and have a forged-aluminum alloy design. Both trims have skid plates, rear spoilers, tow hooks up front and in the rear, and mudguards to make them more rugged. They also have automatic windshield wipers that can turn themselves on when they sense rain. The base model has a standard roof rack, and the Heritage Edition is upgraded with a more premium MegaWarrior rack made by Yakima.

Interestingly, running boards are only present on the base model. Without them, the Heritage Edition has a slightly cleaner and more streamlined appearance, and the SUV may be able to more easily make its way over rocky areas since they won't ever get in the way. One thing that the Heritage Edition has that the base model doesn't is a throwback Land Cruiser exterior badge.

Moving to the inside of the cabin, the upgrades on the Heritage Edition continue to set it apart from the base model. While most are aesthetic, some are functional.

The biggest difference is the the base model comes standard with eight-passenger seating. The Heritage Edition offers this configuration as an option, but it can also come with two rows of seats to accommodate five people. This would obviously make the cargo area much larger, and some people just don't need those extra seats.

The two trims have perforated leather seats that feel soft and look luxurious. Front seats are heated and ventilated, the driver's seat can be power-adjusted in ten ways and can be set to remember three different positions, and the second-row seats can be heated. With the Heritage Edition, there is a black headliner as well as bronze stitching to strike a nice contrast. That stitching is found on the seats, door panels, parts of the console, and steering wheel. The steering wheel has more than just accent stitching, as it's trimmed in leather, has a heating element in it, and is power-adjustable in terms of its tilt and length.

Another difference is that the Heritage Edition is the only Land Cruiser trim to have all-weather mats in the seating and cargo areas. If someone chooses to get a two-row Heritage Edition Land Cruiser, the cabin will be set up for that. Instead of LED interior lighting in the second and third rows, it will be limited to the second row. It will have two fewer cup/bottle holders than the three-row version, and it will have a tonneau cover for the cargo area.

The technology package on the Land Cruiser is the same no matter whether one selects the base model or the Heritage Edition. It comes with a nine-inch touchscreen and advanced voice recognition. People can enjoy listening to their music through 14 JBL speakers. A trial subscription to SiriusXM is included, and of course, drivers can choose to continue this service if they wish. Through the Siri Eyes Free technology, people can wirelessly connect their smartphones to their vehicles' infotainment systems. This makes it not only easier but also safer to make phone calls, send and receive texts, look up information, and find media files. With integrated navigation, drivers can have instant access to directions, and those directions can take into account changing traffic patterns.

Wireless charging is included on the Land Cruiser. This eliminates the need to fiddle around with cords and wires when low batteries need to be addressed; instead, people can just place their compatible devices on the charger. Three-row Land Cruisers come with the option to get a DVD entertainment system to keep the rear-seat passengers happy. The system consists of two screens that are sizable at 11.6 inches, along with a few inputs/jacks, a remote control, and a pair of wireless headphones.

Similar to what has already been discussed, the two trims of the Land Cruiser offer the same safety advantages. They both use driver-assist technologies to lower the chances of getting involved in an accident. These technologies use various sensors and monitoring systems to keep track of what's going on. If something isn't right, the driver will be warned and the SUV could potentially take corrective action. Systems include blind spot monitoring, pre-collision braking, the ability to detect pedestrians in a path, automatic high beams, and adaptive cruise control. Further, the two trims have a Bird's Eye View Camera system. It gives people a full, 360-degree view of what's around them, and it can work when the vehicle is in both Drive and Reverse.

The price difference between these two trims is about $2,300. Considering that the starting price of the Toyota SUV is over $85,000, this amount is like a drop in the bucket. For this reason, it makes sense to get the Heritage Edition. After all, if someone is prepared to pay the Land Cruiser's premium price, he/she might as well go for it all and get the best version possible.

The Heritage Edition runs on the same powerful engine as the base model does. The trims have the same quality mechanical components that make the SUV ideal for off-roading. Inside, the two SUVs show their class with perforated leather seats and numerous conveniences normally seen in luxury brands. Where the Heritage Edition stands out is mostly related to the stylings. Sophistication is found everywhere, from the bronze stitching on the leather steering wheel and the black headliner to the dark chrome accents around the lights and the special badging. The Heritage Edition feels exclusive, almost like a limousine that's been supercharged to be an off-road beast.