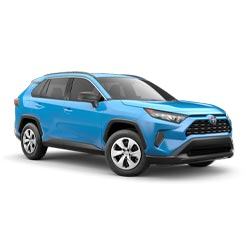 What 2021 Toyota RAV4 Trim Level Should you Buy? What is the Difference Between Trims?

The Toyota RAV4 has long been a popular choice amongst consumers. Toyota is a brand that a lot of people feel comfortable with, and its RAV4 has a great combination of capability, versatility, and practicality. With two rows of seating, it has the feel of a traditional SUV, and it does many things better than its competitors.

Toyota makes more than a handful of different types of RAV4s. This makes the decision-making process a lot more complicated, but this guide should hopefully provide prospective customers with the information they need to make their choices.

Compare the 2021 Toyota RAV4 LE vs XLE Trim Levels. What is the Difference?

First of all, both of the these trims come in hybrid and non-hybrid versions. This is true for many of the trims, which will be described later in this overview.

All-wheel drive is available on both the LE and XLE. The hybrid versions automatically come with an electronic on-demand AWD system. Having all-wheel drive does mean that the RAV4 isn't quite as efficient, as it decreases fuel economy by about one or two miles per gallon.

That brings this discussion to how the LE trim differs from the XLE. First, the XLE has an automatic stop/start function on its engine to save gas, while the LE does not. This function doesn't affect driving at all, as it only engages when the SUV is stopped for at least a few seconds, like at a red light. In terms of wheels, the LE has steel ones whereas the XLE has five-spoke silver alloy ones that look a little more upscale.

There are other exterior differences as well. The LE's LED headlights are surrounded by black bezels, and the XLE's are surrounded by chrome bezels. The XLE has integrated fog lights, and it also has side mirrors that have heating elements, turn signal indicators, and blind spot monitors. Since the XLE comes with a Smart Key, its door handles have touch sensors that can be used to unlock and lock the doors. A moonroof is an option on the XLE, but not on the LE.

Moving to the inside of the cabin, there are some ways in which the XLE sets itself apart from the LE. Both trims have fabric seats, but the XLE's have embossed seat inserts. The XLE has a two-zone automatic temperature control system, while the LE just has a manually operated climate system. Heating elements can be put into the XLE's front seats and steering wheel, if one prefers. Some minor differences are that the XLE has a cargo area cover, sliding extensions on its sun visors, and silver door handles instead of black ones.

Having more than one USB port can be a huge bonus given all the technology used these days. The LE is limited to having one USB port, but the XLE has five. Both trims have seven-inch touchscreens and smartphone compatibility. They also have Amazon Alexa and SiriusXM. The XLE can be upgraded with an eight-inch touchscreen for anyone who loves having the best technology.

Compare the 2021 Toyota RAV4 XLE vs XLE Premium Trims. What is the Difference?

The XLE Premium has a lot of extra flair to it, and like the XLE, it comes in hybrid and non-hybrid versions. Some of its features are evident upon first glance. For instance, it rides on 19-inch chrome alloy wheels, and it comes standard with a power moonroof. The height of its power liftgate can be adjusted; this is an option on the XLE as well.

From a safety standpoint, the reality is that all the Toyota RAV4 trims are well equipped. They all have adaptive cruise control, pre-collision braking that can prevent accidents with cars and pedestrians, and lane tracing. While the XLE is the first trim to come with blind spot and rear cross-traffic monitoring, the XLE Premium is the first to have an available parking assist function. It can warn drivers when they're getting too close to objects, and it can even hit the brakes so they don't make contact.

Compare the 2021 Toyota RAV4 XLE Premium vs Adventure Trim Level. What is the Difference?

With the Adventure trim, all-wheel drive is standard. Its all-wheel drive system is a more rugged version than what's seen in the previous trims, making the Adventure more suited for people who will hit the trails. Its system comes with Downhill Assist Control to make it easier to go down steep inclines.

The infotainment systems in these two trims are almost identical. The difference is that the Adventure has an eight-inch touchscreen in comparison with the XLE Premium's seven-inch version.

Compare the 2021 Toyota RAV4 Adventure vs TRD Off-Road. What is the Difference?

Thees trims have a lot in common, as they've been built for people with adventurous spirits. If the Adventure seems like its spirited, the TRD Off-Road is even more so.

It has TRD-tuned suspension components to make it even more suited for rugged terrain. Its exterior has TRD badging, and it's the only trim to have a front skid plate stamped with its trim name. Some other unique things about the TRD version are that it has black trim around its LED fog lights and it has black side mirrors. Like the Adventure, the TRD Off-Road has black roof rails that are slightly raised, and it can come with the two-tone color scheme.

In the technology category, the Adventure sits at the same level as the TRD Off-Road. Something noticeable, though, is that the Adventure can be upgraded with navigation.

Compare the 2021 Toyota RAV4 TRD Off-Road vs XSE Hybrid Trims. What is the Difference?

In an interesting move, Toyota has made the RAV4 in the XSE Hybrid trim, but not in an XSE non-hybrid trim. Just like the other hybrids, the XSE Hybrid uses the 2.5-liter engine and an electric motor. It can be convenient to have a car that can regenerate its own battery charge without having to be plugged into an outlet.

The XSE Hybrid has a more athletic feel than some of the other trims, and it has a sport-tuned suspension with blue shock absorbers. It has a dark gray front grille that looks sleek, and it comes standard with the two-tone exterior color scheme. While a moonroof is standard on the XSE Hybrid, there is the option to get a panoramic glass roof. This can be thought of as an extra-large moonroof, with one part that opens up either by tilting or sliding back.

Blue is the color that Toyota has picked for the XSE Hybrid's accents. There is blue stitching on the seats and doors, and the ambient lighting has a blue hue. The XSE Hybrid is the first trim in which the front seats are heated. It's also the first trim that comes standard with a digital rearview mirror.

One element that's optional in the TRD Off-Road but not in the XSE Hybrid is a bird's eye view camera. Perhaps that's because TRD Off-Road drivers might be more likely to find themselves in difficult situations.

Compare the 2021 Toyota RAV4 XSE Hybrid vs Limited Trim Level. What is the Difference?

This comparison is a fun one because it illustrates how much the RAV4 has to offer. The Limited trim takes the RAV4 back to 19-inch wheels. Making it feel more elegant are chrome-accent door handles. One option only found on the Limited is a hands-free liftgate.

Some people may be surprised to hear that the Limited doesn't have leather seats. Instead, Toyota has chosen to stick with the SofTex material that the XSE Hybrid and some other trims have. What the Limited has that the other trims don't is a luxurious dark brown color scheme in its cabin. Dark brown is found in the stitching, door accents, and cup holders, and it adds a touch of class to the SUV.

Heated front seats are standard on the Limited, and they can be enhanced with ventilation. Even the rear seats can be heated if one wants to treat their passengers to some extra warmth.

Navigation is standard on the RAV4's top trim. This is a major perk, and Limited drivers and passengers can enjoy listening to the sound coming out of the 11 JBL speakers.

In terms of safety, the Limited is the only other trim besides the TRD Off-Road to have an available bird's eye view camera. It's also the only trim to have the parking assist feature that works to prevent accidents while maneuvering in tight spaces.

There are quite a few choices with this vehicle, but it doesn't need to be overwhelming. This is because the trims are actually pretty different from each other, so there's something for everyone.

To start, the hybrid models will appeal to those who want to limit their energy consumption and are willing to part with a few extra thousand dollars to cover the added cost of getting a hybrid. Hybrid RAV4s handle themselves very well, and remember that they have more horsepower than their counterparts.

Those interested in tackling challenging conditions will lean towards the TRD Off-Road and Adventure. Most likely, though, the average RAV4 customer will be looking for something more traditional. Toyota has made a range of trims available that will appeal to people with this preference, ranging from the LE to the Limited. To be honest, the LE has a great package, with solid technology and safety components. It's comfortable, reliable, and powerful, and it can offer everything that someone might need.

If someone wants a bit more but still wants to be mindful of the budget, the XLE would be the trim to select. It has many convenient features, such as the Smart Key System and a power-adjustable driver's seat, and it can be upgraded with even more. It's a smart pick on a lot of different levels. It can come as a front-wheel-drive or all-wheel-drive version, and people can get it as a hybrid if they wish.

Save Money on a 2021 Toyota RAV4:
Are you Shopping for a New Vehicle? Find the Best Deals with "Free - No Hassle" Prices Quotes.