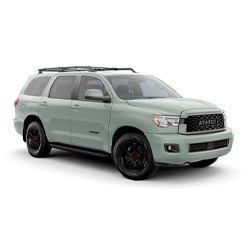 What 2021 Toyota Sequoia Trim Level Should you Buy? What is the Difference Between Trims?

Toyota has a lot of SUV options on the market. They even make more than one three-row SUV. While the Highlander is sedan-based and offers a more refined ride, the 2021 Toyota Sequoia has a truck-on-body frame and is more rugged. As a result, the Sequoia is a good choice for families who like to hit the trails or tow along heavier toys.

In 2021, the Sequoia makes very few changes. The Nightshade Model does make an appearance, however, giving you one more option to consider when shopping this SUV. It makes primarily changes to the appearance of the vehicle but Toyota considers it to be its own trim level.

With this addition, there are six different Sequoia models to select from in 2021. Those who are wanting high-tech safety and infotainment features will find they are standard from the entry-level SR5 and up. Off-road enthusiasts will want to take a closer look at one of the TRD models.

Narrowing down the six choices to find the best one can be challenging. To help, the following guide will point out the changes found when moving up the trim ladder.

Compare the 2021 Toyota Sequoia SR5 vs TRD Sport Trims. What is the difference?

The TRD Sequoia has the same engine underneath the hood of the SR5 as it does the rest of the lineup. The mighty 5.7L V8 does an excellent job of moving this large vehicle. The 2021 Sequoia has the ability to produce 381-horsepower and 401 lb-ft of torque. A six-speed automatic is standard for the SR5. The SUV can tow between 7,000 and 7,400 pounds.

This first trim level comes standard with rear-wheel drive. If you would prefer, a sophisticated four-wheel-drive system is also an option. It comes with a two-speed transfer case that includes both high and low-range gearing. This is part of what makes all Sequoia models ready to tackle anything.

LED lighting on the outside of the SR5 helps this model to see and be seen. You get LED fog lights, daytime running lights, and headlights. When moving around to the back, the Sequoia has a rear spoiler with an LED stoplight mounted in the center. This model has 18-inch alloy wheels.

The roof rack of the SR5 is silver while the running boards are black. An engine skid plate is standard on all models. If you choose to go with 4WD, a skid plate for the transfer case is included as well.

Easy-clean cloth-trimmed seats are standard for the SR5. Buyers can opt for leather-trimmed upholstery instead for a little extra cash. This model is only available with the eight-person seating configuration. The driver gets eight-way power-adjustment and the front passenger gets four-way power-adjustment. Tri-zone automatic climate control is included.

The Sequoia SR5 comes with Toyota's Smart Key System, which includes push-button start as well as keyless entry. Also included is illuminated entry so you never have to stumble around in the dark when hopping into this SUV.

For your entertainment, the SR5 comes with the Audio Plus setup. It includes a 7-inch touchscreen as well as eight speakers. Smartphone integration can be done using either Android Auto or Apple CarPlay. Other fancy touches included with this infotainment system include HD and satellite radio, multiple USB ports, Amazon Alexa capability, and a free trial for a Wi-Fi hotspot.

The Toyota SafetySense P group of driver aids is found on the SR5. This means even this entry-level model comes equipped with lane departure alert, dynamic radar cruise control, and a pre-collision system with pedestrian detection. Also found on the SR5 is a blind-spot monitor as well as automatic high beams. Higher trims do not add more when it comes to advanced safety tech, something both unusual and refreshing about the Sequoia.

Option number two, the TRD Sport, is one of the more athletic options on the list. It gets a specialized set of sport-tuned shock absorbers as well as an anti-sway bar. This model sits on 20-inch TRD Sport-exclusive black alloy wheels.

On the outside, the black surround for the fog lights gets replaced by chrome. The side mirrors are black. To help set it apart, there are satin black TRD Sport badges on the front doors. Various Toyota logo badges around the TRD Sport are black as well. Even the roof rails are black for this trim.

The standard setup for the cabin of the TRD Sport has seating for seven with second-row captain's chairs. Seating for eight is not available. Easy-clean cloth upholstery remains the norm with leather-trim being an option. The TRD Sport gets its own sportier style for the shift knob and floor mats.

Technology, both for safety and convenience, remains the same when looking at the SR5 and the TRD Sport. Overall, these models are very similar. Only families who really need the off-road abilities will want to go with the TRD Sport, which costs nearly three thousand more than the SR5.

Compare the 2021 Toyota Sequoia TRD Sport vs Limited Trims. What is the difference?

Mechanically, the Limited trim is the same as the SR5 rather than the TRD Sport. It does get to keep the 20-inch wheels. For the Limited model, however, they have a silver finish rather than black.

The side mirrors gains an auto-dimming feature, as well as the ability to power-fold. They also have integrated turn signals for the Limited trim. This is the first model to show off chrome door handles. On a more practical note, you will find a power liftgate when choosing this midlevel model.

Retractable sunshades are added for the second row and the third row. In the front, the sun visors add on illuminated vanity mirrors as well as secondary visors. The cup holders gain chrome trim in the front.

This is the first trim level to offer the rear-seat entertainment package. It includes two sets of wireless headphones and a 9-inch screen, as well as a Blu-Ray player. The standard infotainment system gets upgraded to include navigation and 12 speakers. A 7-inch touchscreen is still used to control the tech.

Compare the 2021 Toyota Sequoia Limited vs Nightshade Edition. What is the difference?

The Limited and Nightshade Edition models of the 2021 Sequoia are very similar. This model does have some unique style touches, however. There are also just enough upgrades to make the Nightshade Edition a genuine possibility for buyers.

For the fog lights, the surround gets a darker chrome to help add to the "night" vibe of this trim. That same dark chrome is also found on the door handles, grille, side trim, and badging. The wheels for this model are also 20-inches and black but with a split-spoke design. You will find that the 2021 Sequoia Nightshade Edition is only available in three paint options. They are Midnight Black, Wind Chill Pearl, and Magnetic Gray.

The Nightshade Edition also has some things in common with the higher Platinum trim. The most important would be the adaptive variable suspension that gives it an even smoother ride. Inside, the Nightshade Edition is only available with the seven-person seating. Tech and safety features are the same.

Compare the 2021 Toyota Sequoia Nightshade Edition vs Platinum Trim. What is the Difference?

For the Platinum trim, Toyota gives the 2021 Sequoia 20-inch wheels with a machine finish and silver accents. The side mirrors are chrome and add a tilt-down feature, as well as memory settings so that you can easily share this SUV with another driver. Otherwise, the Platinum trim looks very similar to the Limited and loses the style touches found on the Nightshade Edition.

Inside the Platinum trim, the rear-seat Blu-ray entertainment system is now standard. The front seats are upgraded to perforated leather and gain ventilation to go along with the heat. Another nice perk found here is the lumbar adjustment for the driver's seat as well as memory settings. The Platinum trim has standard seating for seven, with the second-row captain's chairs gaining heat.

There is a handy multi-function center console standard for this trim. This feature was optional in the trims that came before. It includes a variety of charging options, including three 12V auxiliary ports and a 120-volt AC power outlet. You will also find RCA jacks.

The infotainment system gets upgraded once again. This model has 14 speakers rather than 12. The stereo system is from JBL and features Clari-Fi technology for a purer music listening experience.

Compare the 2021 Toyota Sequoia Platinum vs TRD Pro Trims. What is the difference?

Like with many Toyota vehicles, the mighty TRD Pro sits at the top of the Sequoia's trim ladder. This model is the only one to come standard with four-wheel drive. It also has a TRD front skid plate for added protection off-road. The entire suspension for this trim is unique and finely-tuned for rugged performance. It includes TRD FOX shocks.

There are a variety of exterior accents to let everyone know that you are driving a TRD Pro. They include logos on the front doors and power tailgate. The wheel size goes down to 18-inches but they are forged-alloy for extra toughness.

Inside, the upholstery is black leather with red accent stitching. Buyers can only get the TRD Pro trim level with the seven-person seating arrangement. The center console for the TRD Pro is not quite as fancy as the one found in the Platinum. It is missing the 120-volt AC power outlet as well as the RCA jacks. The TRD Pro also does not have the illuminated vanity mirrors in its sunshades.

The TRD Pro does keep the infotainment upgrades made by the Platinum, however. It also has all of those same driver aids that have been found in the Sequoia from the beginning. The TRD Pro is a great choice, but only if you are going to actually take advantage of its off-roading abilities.

Toyota gives the 2021 Sequoia a lot to love from the beginning. That is why most buyers will find that the entry-level SR5 is perfectly acceptable. Unlike most SUVs, you will not have to upgrade in order to get a more powerful engine or more advanced safety tech.

Of course, if you have your heart set on things like leather upholstery or a premium audio system, the Limited trim has some appeal. The Sequoia is a pricey SUV in general, however, so be sure these things are really worth the extra money.

If you and your family find yourselves camping or exploring frequently, the TRD models are also worth your consideration. The TRD Sport makes a few upgrades, but serious adventurers will want to shoot all the way up to the TRD Pro. Very few three-row SUVs have the capability of the 2021 Sequoia's top trim.

For most families, the 2021 Toyota Sequoia SR5 will be the smart choice because it has plenty of bells and whistles at a more affordable price.