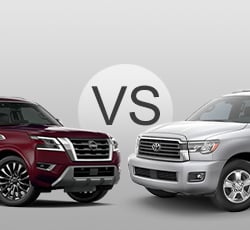 As far as three-row SUVs go, the 2021 Toyota Sequoia and Nissan Armada are some of the most well-equipped models in the industry. Though they're not made by companies that most would consider to be luxury brands, they really do have a lot of sophisticated elements. They feel like upscale models because of their technology and interior materials, and they're quite capable at the same time. This detailed guide should give a potential customer a better idea of which SUV might be a better match.

Two massive engines can be found in the Toyota Sequoia and Nissan Armada. The Toyota is powered by a 5.7-liter V8 engine, and the Nissan uses a 5.6-liter V8. In the Sequoia, there's 381 horsepower and 401 pound-feet of torque. Though the Nissan's engine is slightly smaller than the one in the Toyota, it's actually able to generate 400 horsepower and 413 pound-feet of torque. Both vehicles have plenty of capability, so people who value performance and plan on using their SUVs for some serious work will be pleased.

The Toyota Sequoia has a respectable towing capacity. It can tow up to 7,400 pounds, which is significantly more than what many other SUVs can do. In fact, this towing capacity is comparable to what some smaller pickups are capable of. The Nissan Armada does even better in this area. It's able to tow up to 8,500 pounds, so it's definitely up to the job if anyone plans on hooking up a trailer.

In either vehicle, customers have a choice of getting two-wheel or four-wheel drive. With both models, rear-wheel drive is the standard configuration. This type of drivetrain is usually found in vehicles of this size and with this general level of capability. The four-wheel drive system in the Nissan has a switch-operated two-speed transfer case. In the Toyota, there can be a limited-slip center differential with a locking feature.

The two SUVs have been designed with rugged terrain in mind. The Armada has independent double-wishbone suspensions in both the front and back. In addition, it has stabilizer bars. Its auto-leveling rear suspension can work to smooth out the ride and balance out the vehicle when it's been loaded down with heavy items in its cargo area.

There are also independent double-wishbone suspension systems in the Toyota Sequoia. It can have an electric modulated air suspension or an adaptive variable suspension to give it a smoother ride.

It can be a lot of fun to be in command of powerful vehicles like these, and acceleration would never be an issue. Anyone who's interested in these models probably knows that they handle themselves well in tough conditions but aren't exactly the most agile vehicles in the market.

Keep in mind that they're quite large. The length of the Sequoia is 205.1 inches. This is a few inches shy of how long the Armada is. They're both exactly 79.9 inches wide, which could make them difficult to park in compact spaces. They have plenty of height to them, with the Sequoia sitting about ten inches off the ground and the Armada having a ground clearance of a little more than nine inches.

Cargo room and passenger space are obviously going to be two areas where these models shine. The Sequoia's three rows of seats have 42.5, 40.9, and 35.3 inches of leg room, respectively. Its rear cargo area has a volume of 18.9 cubic feet, and when all the rear seats are folded down, there is approximately 120 cubic feet of cargo space. In the Armada, leg room in each of the three rows is 41.9, 41, and 28.4 inches, respectively. The smaller third row may be of concern to some buyers with large households.

Though it's the longer of the two models, the Armada has less cargo room than the Sequoia has. It about 16.5 cubic feet of storage space behind its third row. When the second- and third-row seats have all been folded down, it has a cargo capacity of about 95 cubic feet. This is certainly a lot of room, but it's not as much as what the Sequoia offers.

It's important to mention that both models can either have either have seven or eight total seats. The configuration that allows for eight seats uses a bench in the middle row. This way, three people could fit in that row. If either of these SUVs has a seven-passenger layout, they would have a pair of captain's chairs in the middle row. Some customers don't need that extra seat and prefer to instead have a more open cabin. Captain's chairs are typically associated with luxury trims, as they can be more comfortable for second-row passengers.

In the two models, there will be a lot of technology to take advantage of. The Toyota Sequoia has a seven-inch touchscreen that has a user-friendly design, and it has Android Auto, Apple CarPlay, and Bluetooth. SiriusXM provides many entertainment options, and Amazon Alexa makes it easy to access all kinds of information. Multiple USB ports mean that there would no competition for charging ports. The driver can make adjsustments to the audio system using the touchscreen, voice commands, or controls mounted on the steering wheel. Navigation is available, as is a JBL sound system and Wi-Fi capability.

In many ways, the Nissan Armada tops the technology package that the Toyota has. This is because it as a 12.3-inch touchscreen and standard navigation. That's right, every one of the Armada trims has a huge touchscreen and integrated navigation. Wi-Fi capability, voice recognition, SiriusXM, wireless charging, and smartphone compatibility are all standard.

Higher trims of the Armada are enhanced with 13-speaker sound systems, and they have five USB ports instead of the standard four that the lower trims have. On some Armadas, there's even a rear entertainment system that comes with two eight-inch monitors, headphones, and a remote control. People riding in the back of the Armada can stay entertained with this feature, which comes with an HDMI input. Select models of the Sequoia have a similar system with a nine-inch display.

People can drive either vehicle around with confidence. These models have sturdy frames, reliable engines, and many advanced components that make them even safer.

The list of standard safety features is very extensive in both models. They have three-point seatbelts in every seating position, the LATCH system to secure child seats, rearview monitors, and multiple airbags. Their frames that have been designed to withstand impact and can keep the energy created by an impact focused in certain areas, away from where the passengers are seated.

In the Armada, there are several additional systems. One of them can correct steering if the driver is accidentally veering out of position. Another is rear automatic braking, which works just like forward collision braking to prevent certain types of accidents. The Armada can have an intelligent rear view mirror, which shows the driver a live camera feed of what's behind the vehicle. This could prevent a situation in which a cabin full of cargo or passengers blocks the driver's view of what's behind him or her. Plus, the Armada can have a 360-degree monitoring system and a sonar system to assist with parking.

When looking at these models, it's obvious that they're not exactly budget-friendly vehicles. The Toyota Sequoia starts at $50,200 and goes up to $64,325 with the TRD Pro trim. The Nissan Armada is in a similar price range. It starts at $52,600, and at the top end of the lineup, the Platinum costs $68,000. The respective companies have carefully designed these vehicles so they are deserving of such premium price tags, but how exactly do the trims match up?

It can be easy to get bogged down with the details of each trim, especially since Toyota have six trims and the Nissan has four trims. To keep things a little more straightforward, this next section will review the standard components, highlight a few of the upgrades that come with the mid-level trims, and see how the top-level trims compare to each other.

Some of the standard exterior components on the Toyota Sequoia are LED fog lights, LED Daytime Running Lights, and LED headlights. Some trims have special badging, chrome or back accents, heated and auto-dimming side mirrors, and power lift gates. The TRD Pro trim takes things a step further with a special front skid plate, black cast aluminum running boards, and a special roof rack.

There are many of the same exterior features in the Nissan Armada, though it doesn't have standard LED fog lights. It does have standard heated side mirrors, which can automatically dim on the mid-level trims. Most of its models have power lift gates and body-colored running boards. The Night trim is the one that has the blackout accents for a bolder look.

On top of having the technology and safety packages previously mentioned, the Toyota Sequoia has a nicely appointed cabin. It comes standard with automatic three-zone climate control, and it can have upholstery ranging from fabric to perforated leather. The auto-dimming rearview mirror with HomeLink technology is found on the mid-level and higher trims. In the lowest trim, there aren't any heated seats, but there are on the mid-level trims. More premium trims have heating and ventilated seats in the front rows, and some have heated second-row seats, too.

The Armada has dual-zone automatic temperature control for the front and has a rear air conditioning system that passengers can control. Like the Sequoia, it comes standard with smart key entry and push-button start. Its higher trims have auto-dimming rearview mirrors, heated second-row seats, and heated and cooled front seats. Heated front seats are standard on the Armada, so this is a bonus. Also, the Armada starts out with leatherette seats instead of cloth. The three higher trims either have leather or quilted leather seats.

It can be difficult to say that one of these models is better than the other. That's because they each have their own advantages. The Armada has the nicer technology and safety components, and it's also the stronger of the two SUVs. In contrast, the Sequoia shines when it comes to interior space and style. It has more third-row leg room and more overall cargo space, and many people will appreciate that it has so many trims and the opportunity for some customization. At the same time, it's a little more affordable than the Nissan, and this is likely to be noticed by buyers who need to be mindful of their budgets.

Potential customers will have to decide whether they want the extra power and high-tech features that the Nissan Armada comes with or the more spacious cabin of the Toyota Sequoia. With either vehicle, there's the opportunity to get a luxurious model with a lot of refinement, and the entry-level trims have much to offer, too.