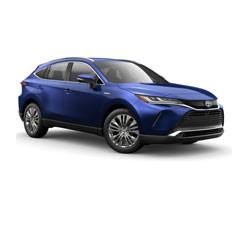 What 2021 Toyota Venza Hybrid Trim Level Should you Buy? What is the Difference Between Trims?

After hearing that the Toyota Venza was coming back to the lineup, a lot of people have been intrigued by what will make this SUV different from the many others in the market. What's most interesting about the Venza is that it's only offered as a hybrid. It really does well in the efficient department, and this is going to help it appeal to many modern consumers. Toyota is bringing this model back to the market after a hiatus of over five years.

There are three available trims with the 2021 Toyota Venza Hybrid. Before getting into the detailed comparison of what makes the trims distinct from one another, it's probably a good idea to go over what they all have in common.

To start, they share the same powertrain. The 2021 Toyota Venza runs on a 2.5-liter engine. The engine has four cylinders and dual variable valve timing with intelligence. It works in conjunction with three electric motors; the first one is used to send power to the rear wheels, and the others are used to spin the front wheels. The Venza's various mechanical components work together to create 219 horsepower. This is a solid amount of capability that gives the vehicle plenty of kick.

Every Venza has all-wheel drive, which is a huge benefit considering that this set-up can really improve traction in slippery conditions. The all-wheel-drive system works when necessary. If there's an issue with gripping the road, power can be sent to the rear wheels to keep the SUV moving safely. Though it's not exactly a rugged AWD or 4WD system, it can certainly come in handy for occasional use.

Two other things working in the Venza's favor are hill start assist control and active cornering assist. The first system helps the vehicle get going after being stopped on a hill. It can prevent a situation in which a vehicle rolls backwards before generating enough power to get moving in the right direction. With active cornering assist, it's mush less likely that any understeering will occur. The Venza can apply extra braking pressure to the inside wheels when it senses that it's taking a tight turn.

Compare the 2021 Toyota Venza Hybrid LE vs XLE Trim Levels. What is the difference?

These two trims look pretty similar from the outside. They both have integrated rear spoilers, color-keyed outside mirrors, dual chrome-tipped exhaust, and dark gray front grilles. Those outside mirrors have turn signals built into them, and they have heating elements and puddle lights. The puddle lights are kind of like a bonus feature; they're not necessary, but they are quite welcoming when approaching the vehicle at night. The heating element, on the other hand, is very functional because it can get rid of any frost that has built up on the mirror.

There are a few differences, though, between the trims. The LE rides on 18-inch wheels, and the XLE uses 19-inch ones. Both types have multi-spoke designs. The LE's wheels have a two-tone finish, and the XLE's wheels have a super chrome finish. The XLE is the only one out of these two trims to have silver roof rails as well as chrome accents on its front and rear lower bumpers.

More differences are found when looking at the lighting on these two Venza trims. The LE has LED headlights and automatic high beams. It also has LEDs in its taillights, stop lights, daytime running lights, and a center stop light. In the XLE, there are LED projector headlights, which are a level above the LE's lights. The XLE has a full-width LED center stop light built into its rear spoiler, and this is an elegant feature that makes the vehicle seem more modern. Finally, the XLE has dual LED daytime running lights.

Another exterior feature that the XLE has is touch sensors integrated into all of the doors. In the LE, only the front doors have these sensors. With the XLE, passengers getting into the back seat or front seats can unlock the doors by simply touching the sensors (as long as the key fob is in close proximity).

Inside the cabin of the LE and XLE, there's a lot to be appreciated. Both trims have wireless charging and an advanced infotainment system. This system consists of an eight-inch touchscreen through which people can access HD Radio, SiriusXM Satellite Radio, and various in-vehicle apps. With voice recognition and Bluetooth, it's easy to give commands while keeping one's hands on the wheel. The infotainment system is compatible with Android Auto, Apple CarPlay, and Amazon Alexa to make things much more convenient.

Technology is integrated into the cabin in many other ways as well. Four USB charging ports are included with the Venza so that everyone can keep their devices charged while on the road. In the LE and XLE, there's an integrated backup camera that shows dynamic gridlines to help people with precise maneuvering. In the XLE, the rearview mirror has an auto-dimming function to minimize glare at night, and it has a HomeLink transceiver so it can act as a garage door opener. In addition, the XLE has a seven-inch multi-information display to show the driver important vehicle information. In contrast, the LE has a 4.2-inch display.

In terms of sophistication, the XLE has much more to offer than the LE does. Little things, like illuminated footwells, might not seem to be very critical, but they can add to the overall aesthetic of the vehicle. The steering wheel on the XLE has a chrome accent and a memory function so it can remember a driver's optimal position. There's an option to get a heated steering wheel with the XLE trim.

Further, the XLE's seats are fabric trimmed and have SofTex bolsters. Heated front seats are standard, and a memory function has been incorporated into the power-adjustable seat in the driver's position. If a customer wants even more, the XLE can be upgraded with heated and ventilated SofTex front seats to provide more comfort when the temperatures are extreme on either end. Standard in the XLE are ambient lighting to add an air of sophistication, color-keyed piping on the dashboard to provide some visual interest, and armrests that are soft to the touch and accented with a wood-grain-style material.

The LE has a power-adjustable driver's seat, too, but it doesn't have a memory function. The front seats in the LE don't have special bolsters, nor do they have heating elements.

From a safety standpoint, the LE and XLE are solid options. They have Toyota's Safety Sense 2.0 package. It's quite comprehensive, as it includes pre-collision braking, pedestrian detection, lane departure alert, and adaptive cruise control. The Venza can detect many types of issues, and it can actually do something about it. If a driver is veering out of a lane or approaching another object too quickly, for example, the SUV can take control of the situation and hit the brakes and/or correct steering. Blind spot monitoring and rear cross-traffic alert are included with the XLE but not with the LE.

Compare the 2021 Toyota Venza Hybrid XLE vs Limited Trims. What is the difference?

The Limited takes things to the next level as it relates to technology and elegance. Like the XLE and LE, it has a good amount of interior space. Maximum cargo capacity is 55.1 cubic feet when the rear seats are lowered, and behind the second row of seating, there's a cargo hold that has a volume of 28.8 cubic feet.

Note that these numbers are reduced a bit if the optional Star Gaze panoramic roof is put into the Limited. With this roof, there wouldn't be any roof rails, so people would have to decide which they prefer more. The panoramic roof extends over the front and rear seats, and what's really amazing about it is that it uses electrochromic glass technology. With the push of a button, the glass can switch from being clear to being frosted. This advanced technology is fun to play with, and it gives people the choice to let in more natural light or to block out some sun rays. The Star Gaze roof is only available with the Limited trim.

Other than the Star Gaze roof, there is one exterior component that sets the Limited apart from the XLE. The Limited's puddle lights on the side mirrors can display the Venza logo rather than just a light.

The majority of the differences between the Limited and the XLE SUVs are found inside their cabins. In the Limited, people can take advantage of a digital rearview mirror. It can display a wider view of what's behind the SUV, reducing blind spots. Going along with this, the Limited's backup camera has a special washer so that it can always display a clear image, and the Limited has the ability to show a bird's eye view of the vehicle. A head-up display is available on the Limited in case anyone wants to stay more aware of what's going on.

In the Limited, a heated steering wheel is standard, as are illuminated doorsills and footwells. The Limited's dual-zone climate system can be controlled using Intelligent Touch capacitive controls instead of traditional physical buttons and dials. Those same type of capacitive controls are found on the center stack in the top-level trim of the Venza.

Seats in the Limited are covered with perforated SofTex material. It's smooth, sophisticated, and durable. Heated and ventilated front seats are standard, and the front passenger's seat can be moved in four ways with the touch of a button.

Of interest to many customers will be that the Limited has a premium infotainment system that comes with dynamic navigation. Navigation can be very convenient when trying to find a new place and/or attempting to avoid traffic congestion. With this system, the Limited has a 12.3-inch touchscreen and nine JBL speakers. Since there is a subwoofer and amplifier, the quality of the sound is noticeably improved over what the standard system can output. (The standard system in the XLE and LE has six speakers.)

While there aren't a ton of trim choices with the Venza, like what is seen with some other Toyota models, there are definitely some things to think about. The LE has many nice features, and of course, it only gets better from there.

When taking budget into account, it becomes clear that the Limited might not be the best choice. The average buyer might not feel that heated and ventilated front seats, a 360-degree camera, and integrated navigation are really justified expenses. That leaves the XLE as the front runner. It has an excellent technology package, and it has many high-end amenities in its cabin. It will definitely be able to provide a safe ride around town, have room for all the luggage and gear associated with long road trips, and be a comfortable and pleasant place to spend time while traveling.