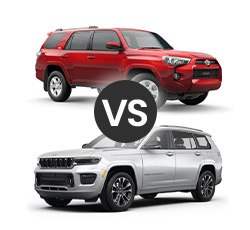 2022 4Runner vs Grand Cherokee - How Do They Stack Up? Which is Better?

Traditonal SUVs are ideal for drivers who need a more rugged driving machine. In terms of off-road capabilities, the 2022 Toyota 4Runner and the 2022 Jeep Grand Cherokee rank atop the midsize segment. While these SUVs share a number of similarities, there are also some distinct differences between them.

For 2022, the Grand Cherokee has been completely redesigned from the inside out. It offers lots of new tech and several premium amenities. Updated styling further sets apart the latest Grand Cherokee. Although the 2022 Toyota 4Runner is mostly unchanged, a new TRD Sport trim level has been introduced. Here’s a breakdown of how these two rivals compare.

There’s only one powertrain available for the 2022 Toyota 4Runner. Although the 4Runner’s V6 engine may not be as modern, it has earned a reputation for being remarkably durable. Toyota rates this engine to push out a solid 270 horsepower. When launched from a stop, the 4Runner can accelerate to 60 mph in about 7.4 seconds. Expect the SUV’s five-speed automatic transmission to be just as long-lasting as the engine. Despite being an older transmission, it’s an impressively smooth performer.

In contrast to the 4Runner, the all-new 2022 Jeep Grand Cherokee gives prospective buyers a total of three powertrains to select from. Most people will perfectly content with the standard Pentastar V6 engine, which punches out 293 horsepower. Expect the 4Runner to match the 4Runner’s 0-60 mph time. However, a more muscular Hemi V8 engine with 357 horsepower is optional. Acceleration will be even stronger.

New for 2022 is the Grand Cherokee’s available 4xe plug-in hybrid powertrain, which pairs a turbo four-cylinder engine with two unique electric motors. Jeep rates the Grand Cherokee 4xe to generate a combined 375 horsepower and a whopping 470 lb-ft of torque. This additional power lowers the SUV’s 0-60 mph time to about 6.0 seconds.

All versions of the Grand Cherokee use an eight-speed automatic transmission. Not only is this modern transmission responsive, but it also helps promote better fuel efficiency.

Both of these SUVs can be used for towing. However, the 2022 Jeep Grand Cherokee has the ability to pull a heavier load. When properly equipped, this vehicle can tow up to 7,200 pounds. By comparison, the 4Runner has a 5,000-pound towing capacity.

The edge in fuel economy goes to the Grand Cherokee. When outfitted with a V6 engine, it can return a government-estimated 19 mpg town/26 mpg freeway. Opting for the Hemi V8 engine drops the SUV’s fuel economy rating to 14 mpg town/22 mpg city. Trims equipped with the 4xe plug-in hybrid powertrain can return a combined 23 mpg. An electric driving range of 26 miles enables the Grand Cherokee 4xe to save even more money at the pump.

The 4Runner’s powertrain isn’t as efficient. It’s stamped with a rating of 16 mpg town/19 mpg freeway. On the bright side, Toyota does tune the SUV’s engine to perform best using regular unleaded gasoline.

Folks who are looking to take an off-road excursion will love both of these vehicles. They feature a rugged design, which allows travelers to confidently tackle rural trails. Although rear-wheel drive comes standard, buyers will have access to some capable 4WD systems.

While all versions of the Grand Cherokee have a rugged persona, the Trailhawk trim is an especially skilled off-road performer. Just a few of its adventurous features include an adaptive air suspension, hill ascent/descent control, and multiple skid plates. When exploring remote areas, a front-facing trail camera helps drivers to approach rough terrain with greater confidence.

An equal number of rugged upgrades are available for the Toyota 4Runner. While the TRD Off-Road trim is tough enough for most people, a heavy-duty front skid plate and high-performance Fox shock absorbers help the TRD Pro trim to conquer even more challenging terrain.

When traveling at a speed of 60 mph, road tests show the 4Runner takes around 125 feet to come to a complete stop. This is about average for the class. Nevertheless, testers have found that the 4Runner tends to nosedive when baking hard. Some drivers have also described the 4Runner’s brakes as being a bit jumpy at times. A shorter 60-0 mph braking distance of 115 feet puts the Grand Cherokee a notch ahead the 4Runner.

Only a select number of SUVs are as bulletproof as the 4Runner. Even after surpassing 150,000 miles, this well-engineered vehicle rarely breaks down. Historically, Jeep Grand Cherokee owners tend to spend more time at the repair shop. However, the new Grand Cherokee’s 60,000-mile bumper-to-bumper warranty provides an extra 24,000 miles of coverage. Both of these models come with a 60,000-mile powertrain warranty from the factory.

Although the 2022 Toyota 4Runner is not as nimble as a car-based crossover SUV, it still feels quite stable when taking curves. This year, an all-new TRD Sport trim has hit the 4Runner’s lineup. A firmer suspension helps transform it into a better-handling model.

The 2022 Jeep Grand Cherokee is a bit more fulfilling to drive on the street. Reviewers were impressed by the Grand Cherokee’s precise steering. As mentioned earlier, both SUVs are champion off-road performers.

The 4Runner’s ride quality is decent for a truck-based SUV. However, its ride can become somewhat bouncy on certain roads. Expect the Grand Cherokee’s overall ride comfort to be more impressive. Jeep’s optional air suspension allows travelers to experience even more cushioning. When cruising around in the new Grand Cherokee, passengers are likely to hear some road noise. While the 4Runner does a good job of muting road noise, it does allow more wind noise to enter the cabin at highway speeds.

Tester drivers like the 4Runner’s outward visibility. The SUV’s boxy design and squared-off windows help reduce blind spots. Visibility out of the Grand Cherokee’s windshield isn’t quite as good. This is primarily due to the SUV’s thicker front pillars.

These two-row SUVs are designed to comfortably transport five passengers. They both provide spacious accommodations. Folks of all sizes can also obtain a commanding driving position. However, an optional third-row seat enables the 4Runner to carry up to seven people. Although the 4Runner’s extra seat is beneficial for larger families, there will be significantly less overall legroom.

When taking road trips in the 4Runner, travelers can bring along a lot of extra gear. It provides up to 47.2 cubic feet of cargo space. While the Grand Cherokee’s cargo area isn’t as expansive, most families will find its 37.7 cubic feet of storage space to be more than adequate.

Although the 4Runner may have a pleasant interior, there’s no overlooking the Grand Cherokee’s elevated level of luxuriousness. Just a few of the Grand Cherokee’s exclusive amenities include a front-seat massage function, second-row ventilated seats, and quad-zone automatic temperature control. Available premium Nappa and Palermo leather gives the cabin an especially high-end feel.

Drivers should have no trouble using the 4Runner’s Entune infotainment system, which features an 8.0-inch touchscreen. Clear graphics and traditional knobs make the interface a breeze to operate. Integrated navigation is offered on the upper trims.

Jeep’s latest Uconnect multimedia system is even more impressive. It is easy to use and processes information extremely quickly. While the Grand Cherokee’s standard 8.4-inch touchscreen is large enough for most people, a wider 10.1-inch touchscreen is on the SUV’s list of options. Many experts rank Jeep's Uconnect 5 interface among today’s best. However, some drivers may prefer traditional buttons over the unit's touch-sensitive controls.

The 2022 Toyota 4Runner only managed to earn a four-star overall safety rating from the NHTSA. While this SUV’s side-impact scores are quite good, it’s frontal crash protection isn’t as impressive. Another weak point is the 4Runner’s lower three-star rollover rating.

These SUVs do offer some potentially life-saving safety technologies. While both SUVs receive forward emergency braking with pedestrian alert on every trim, the Grand Cherokee goes a step further by adding active lane assistance and blind-spot warning to its list of standard equipment.

There are some other exclusive driving aids available for the Grand Cherokee. While intersection collision assist warns the driver of approaching vehicles, an available night vision system makes animals and pedestrians more recognizable. Meanwhile, Jeep’s available Active Driving Assist system can keep the SUV centered in its lane by making steering adjustments. Drowsy driver alert and an automated parking system are also only offered on the new Grand Cherokee.

These two midsize SUVs has a similar starting price. While Toyota lists the 4Runner with an MSRP of $37,300, Jeep has priced the entry-level Grand Cherokee at $37,400. When it comes to value, neither vehicle has a clear advantage over the other.

Drivers who want to save some money should consider the 4Runner TRD Off-Road. This trim is nearly just as rugged as the 4Runner TRD Pro. However, its sticker price is about $11,000 lower.

Drivers who simply want a rugged family vehicle will find both the 4Runner and the all-new Grand Cherokee to be excellent options. These SUVs are made for adventure. A slew of off-road upgrades are available.

In terms of overall luxuriousness, the Grand Cherokee is superior to the 4Runner. Just a few of its exclusive amenities include a fully digital gauge cluster, automated parking, a front-seat massaging function, and a passenger-side touchscreen display. Although the 4Runner’s available JBL premium audio sounds quite good, it takes a backseat to the Grand Cherokee’s available 19-speaker McIntosh premium audio system.

Despite losing to the Grand Cherokee in quite a few areas, the 4Runner comes out on top in some categories. This SUV offers world-class reliability. Grand Cherokee owners may have to spend more money on repairs in the long run. Furthermore, only the 4Runner offers an optional third-row seat.

At the end of the day, the redesigned 2022 Jeep Grand Cherokee wins this head-to-head battle. It delivers a better driving experience and offers a greater number of premium features. Car shoppers who do decide to pick the 2022 Toyota 4Runner will likely be just as satisfied with their decision.