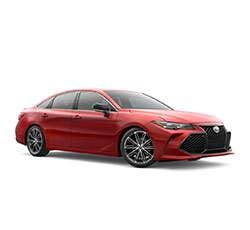 What 2022 Toyota Avalon Trim Should You Buy? What is the Difference Between Trims?

There are several choices for those who are interested in full-size sedans, and the 2022 Toyota Avalon is one of the leaders in the field. Known for its reliability and practicality, the Avalon has a lot of high-tech equipment as well as a roomy cabin. Many customers appreciate that it has two available powertrains, one of which is a hybrid system. On top of all of this, the Avalon looks modern and stylish.

This model has had a successful run, but unfortunately, 2022 will be its last year. Perhaps this is a sign of the times, as crossovers and SUVs are becoming more popular. That being said, customers still have the opportunity to get the Avalon. It may be a smart move to get this sedan since it has such great value.

Compare the 2022 Toyota Avalon XLE vs XLE Hybrid. What is the difference?

The XLE Hybrid is only $1,000 more expensive than the XLE, so it makes sense that these trims have more similarities than differences. Obviously, the most striking contrast is that the XLE Hybrid has an electric motor giving it a boost. It uses a 2.5-liter, four-cylinder engine along with that electric motor, and it has a net horsepower of 215. This amount of capability is more than decent, and it should make the hybrid fun to drive. Toyota has put in an electronically controlled continuously variable transmission into the XLE Hybrid.

Under the hood of the XLE trim, there's a 3.5-liter V6 that provides 301 horsepower and 267 pound-feet of torque. It works in conjunction with a direct shift eight-speed electronically controlled automatic transmission. Both the XLE Hybrid and XLE have front-wheel drivetrains and a sequential shiftmatic mode. This mode allows for manual shifting whenever people want to have more control over that aspect of driving.

As is evident by the numbers, the XLE is much more powerful than the XLE Hybrid is. This may cause some potential buyers to favor the XLE, but remember that the hybrid version could potentially be cheaper to drive in the long run, thanks to its enhanced fuel efficiency. The XLE Hybrid can earn an estimated 44 (combined) miles per gallon. In comparison, XLE achieves an estimated 26 (combined) miles per gallon. It all comes down to personal preference, and a test drive would prove to be very useful for those who are undecided about what powertrain to get.

The interior dimensions of both trims are pretty much the same. Rear-seat passengers get to enjoy having more than 40 inches of leg room. The bucket seats in the front are very comfortable as well. The two trims have the same type of SofTex seating upholstery and auto-dimming rearview mirrors. A smart key system is very convenient, and the trunk has a generous size of about 16 cubic feet.

On the outside of these two cars, there are 17-inch wheels, color-keyed shark fin antennas, LED headlights, LED Daytime Running Lights, and LED taillights. The XLE Hybrid has a single hidden exhaust instead of a dual exhaust with chrome tips like the XLE has. The hybrid version also has an active grille shutter to reduce drag and improve efficiency.

The only difference in regards to safety is that the XLE hybrid emits a noise when it travels at low speeds. Since hybrids are so quiet, this noise is important to alert pedestrians to its presence. Both trims have an impressive set of driver-assist systems that include blind spot monitoring, forward collision warning, and full-speed range dynamic radar cruise control. Toyota has made a strong effort to make vehicles that are safe and reliable, and the Avalon exemplifies that.

Compare the 2022 Toyota Avalon XLE Hybrid vs XSE Hybrid Nightshade. What is the difference?

Mechanically, the XLE Hybrid and XSE Hybrid Nightshade are nearly identical. One exception is that the Nightshade has an enhanced suspension. While it has the same type of independent MacPherson strut front suspension and multi-link rear suspension that the two XLE trims have, it benefits from sport-tuned shock absorbers, springs, and stabilizer bars.

Stylistically, these two trims have several differences. Toyota has given the Nightshade a bold appearance. For instance, it has smoked chrome bezels around its headlights and a sport mesh insert on its black grille. At the rear of the car, there's a black Toyota emblem and "AVALON" lettering, and these match the black door handles, antenna, spoiler, side mirrors, and and window trim. Instead of 17-inch wheels that the lower trims have, the Nightshade has 19-inch wheels that are, unsurprisingly, black.

Many will love the fact that the Nightshade has a power moonroof. It can tilt or slide ope, and it comes with a sliding sunshade. This type of moonroof is available on the XLE and XLE Hybrid, but is not standard.

Inside the cabin of the Nightshade, there are a few other enhancements. It has wireless charging, which is a feature that's only optional on the XLE trims. Further, it has paddle shifters on its steering wheel. Its aluminum trim and aluminum pedal covers stand out and help it feel more sporty. Plus, the Nightshade has HomeLink technology built into its rearview mirror. This eliminates the need for a separate garage door opener.

Compare the 2022 Toyota Avalon XSE Hybrid Nightshade vs Touring Trims. What is the difference?

When moving from the XSE Hybrid Nightshade to the Touring, the Avalon goes back to having the standard powertrain. The Touring has the same kind of enhanced suspension that the Nightshade does, and it has an adaptive variable suspension and active cornering assist. These can improve handling by making precise adjustments according to the inputs they receive regarding speed, driver input, and road conditions.

The Avalon has different driving modes so that people can customize their experiences. The XLE trims have three modes, which are Eco, Normal, and Sport. The Nightshade adds an EV mode to the list of options so that drivers can use an electric-only mode for limited amounts of time. With the Touring, there is a Sport+ driving mode that is more performance oriented. It can make a regular commute much more thrilling.

In many ways, the Touring has a slightly more refined look than the Nightshade does. It has dynamic turn signals and adaptive cornering lights that are very modern. Its side mirrors have a memory feature, and the driver's-side mirror has an auto-dimming function.

The Touring has quad chrome tips that make it seem more athletic, and it has active noise control, a sport sound-tuned exhaust, engine sound enhancement, and an intake sound generator. These features work together to cancel out certain types of noises and make the engine seem louder and more powerful. Because of this, the Touring feels more like a race car than the other trims in the lineup.

While the Nightshade and the lower trims have fairly upscale seats, the Touring takes things a step further. Instead of just having heated front seats, it has heated and ventilated front seats. Its front-passenger seat has four-way power-lumbar support just like the driver's seat has. Also, the Touring's rear seats and steering wheel are heated. When the temperatures drop, this can be very much appreciated.

A major factor that may make the Touring more attractive is its integrated navigation program. Navigation has been built into its infotainment system so that drivers can always know where they're going and what traffic is like on their routes. Some of the other standard components are SiriusXM, Android Auto, Apple CarPlay, Amazon Alexa, and Bluetooth.

Instead of having an eight-speaker sound system like the lower trims have, the Touring has 14 speakers, and they're made by the JBL company. All trims of the Avalon have nine-inch touchscreens. Note that the premium infotainment system with navigation and the JBL sound system is available on the lower trims; it just costs a bit extra.

To keep people aware of what's going on while they drive, the Touring comes with a ten-inch color head-up display. It can show the speedometer, compass, outside temperature, and other types of information. The Touring can be upgraded with a bird's eye view camera, too. Other enhancements that are part of the Touring trim include a frameless auto-dimming rearview mirror and ambient lighting.

Compare the 2022 Toyota Avalon Touring vs Limited Trim Levels. What is the difference?

The Limited is not as athletic as the Touring is. As such, it doesn't have adaptive variable suspension, sport-tuned shocks, or active cornering assist, which can all be found in the Touring. What it does have, though, are a few more high-end features.

Perhaps the biggest upgrade associated with the Limited trim is its premium leather upholstery. This type of seating material can make an impact and influence the overall style of a vehicle. Its genuine wood interior trim looks luxurious. To some buyers, these elements might not justify the extra cost, but to others, they may be well worth it.

Toyota has given the Touring 19-inch wheels, but the Limited only has 18-inch wheels. These slightly smaller wheels still look great, especially because they're super chrome alloy versions. The Limited has the same type of LED headlights, dynamic turn signals, and adaptive cornering lights as the Touring has. However, it doesn't have all of the black exterior accents. Instead, it has color-keyed door handles, side mirrors, and a shark-fin antenna.

Compare the 2022 Toyota Avalon Limited vs Limited Hybrid. What is the difference?

The Limited Hybrid has all the same types of components as the Limited does, but of course, it has the hybrid powertrain. People will have to think hard about whether it's more important to have better fuel efficiency or more power. This hybrid trim has an active gray shutter that's the same as what the XLE Hybrid has. At the back of the Limited Hybrid, there's a single hidden exhaust instead of the dual exhaust with chrome tips as seen in the Limited.

The only interior differences have to do with the information systems. With the Limited Hybrid, the head-up display and digital information cluster behind the steering wheel can both show data that has to do with the hybrid powertrain.

A potential buyer first has to ask whether he/she would prefer the V6 or the hybrid powertrain. Because the hybrid versions of the Avalon are so much more efficient than the standard ones, the hybrid trims are recommended. While they aren't quite as powerful, the reality is that they have plenty of kick and will be more than satisfactory for nearly all situations on the roads. Going with the hybrid narrows down the choices to just the Limited Hybrid, XSE Hybrid Nightshade, and the XLE Hybrid.

The Avalon has a starting price of about $36,000, so it's not the most affordable sedan out there. When assuming that a customer will want to be more conservative in spending, the XLE Hybrid would be the one to pick. It has many impressive features, such as a comprehensive infotainment package, advanced drive-assist safety systems, and a comfortable and well-appointed cabin.

On the other hand, if someone wants to drive a model with a more elegant style and has the budget to accommodate those preferences, then the Limited Hybrid would certainly meet higher expectations. Since it has heated and ventilated seats, leather upholstery, and navigation, it would really able to please those with more discerning tastes.