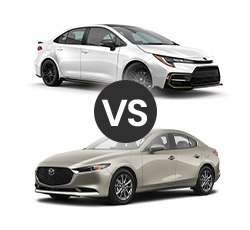 Compact cars are usually the top selling units in the car market, and it is not hard to see why. They provide the best fuel economy, the sportiest handling, and the most value out of any type of vehicle, and they often come with lots of fun features.

If you do not need the large space of an SUV, then the compact care category is the most attractive one. This is where you can find the vehicles that tend to get the best reviews and the most popular sales figures. There is also a lot of competition in the compact car space, which helps to keep prices low.

Two of the best-rated and top-selling compact cars for 2022 are the Toyota Corolla and the Mazda 3. Critics have ranked these both at the top of the category thanks to their many advantages and outstanding value for money.

They take different approaches to design, but these two compact cars are both stellar options, and they certainly are not going to break the bank. Understanding which car to pick can take some research, and it is worth saying that neither model has any major flaws that should keep you away.

Once you read this guide, you will have an understanding of how the two cars stack up in terms of key characteristics like performance and value, showing how their design philosophy influences their slate of offerings. A new car is a commitment, so it is worth making sure that you are happy with your choice and that it is the best one for your specific needs.

The Corolla and the Mazda 3 differ significantly in terms of their engine and other performance aspects. The Toyota Corolla is focused on comfort and fuel efficiency, while the Mazda 3 is a sportier and more powerful car that has agile handling and a sleek performance feel.

To start with the engine choices, the Toyota Corolla has two. The bottom three trims come with a V4 rated for 139 horsepower. The top two trims also have a V4, but this one gets 169 horsepower. The base engine feels a bit sluggish and can also be loud at high speeds, which is distracting.

The upgrade engine adds a little more pep, which is easier to notice when trying to pass on highways. Both come with a CVT for a transmission, which is well-designed and works seamlessly to maximize performance. The upgrade engine has 41 miles per gallon on highways for fuel economy, and for city roads it gets 32 miles per gallon. That is very good, even for a compact, and the base engine is actually a few MPG less in each category.

The Mazda 3 has three engine choices. The base trim only has a V4 that makes 155 horsepower. The standard engine on the majority of the Mazda 3's trims is the V4 that gets 186 horsepower. The top engine available adds a turbocharger to that engine, so it reaches 227 horsepower, and that becomes 250 if you use premium fuel instead of regular.

For gas, the Mazda 3 can make 36 miles per gallon for highway conditions and 28 in cities on its base engine. The two more powerful engines have lower fuel economy. The Mazda 3's engines are notably better than the Corolla's when it comes to acceleration, smoothness, and sound, although they do lag behind a bit when it comes to using gas.

Beyond just engine power, the two cars also differ in terms of handling as well as other aspects, like their infotainment. The Corolla is a steady, if unexciting drive. It won't have any trouble with corners and traffic, but it doesn't feel agile or sporty. On the other hand, that is exactly what the Mazda 3 specializes in.

The 3 feels like a sports car with tight, responsive steering and graceful movement. Mazda designed this car with the idea of making a sports car-esque experience in a reasonable compact car budget, and they succeeded. Both cars manage to stay comfortable in terms of ride quality when the surface gets a little rough, but neither one can handle anything like offroading.

For infotainment, the two cars both offer compelling packages of features, although they are not the same. For example, the Corolla comes with either a 7 inch or 8 inch touchscreen. The screen on the Mazda 3 is 8.8 inches across, but it does not have touch control. The Corolla's interface is simple, clear, and easy to use, while getting around the Mazda 3's menu can take a little longer due to the lack of touch.

The interior quality of both cars is contemporary and fresh, but the Mazda 3's is a bit more upscale. It provides higher-end materials and a nicer look. There is nothing wrong with the interior of the Corolla. It's minimalist and elegant without feeling as though it is missing anything or that it is stripped down. At higher trims both interiors get more features and more upscale elements, but the Mazda 3 is better at the low end and maintains a small edge on all trim levels compared to the Toyota Corolla. Both have comfortable and spacious interiors with a good amount of cargo space.

The 2022 Toyota Corolla and 22 Mazda 3 both have a lot of appeal as family cars thanks to their generous safety packages. Both models scored very well on crash tests, with the Mazda 3 earning the elite Top Safety Pick Plus designation from the Insurance Institute for Highway Safety. The Corolla didn't do badly in any tests, and you should be confident with the protection that both of them provide, as well as with the other aspects that the crash tests measure, like headlight usability and ability to prevent collisions with advanced features.

The Corolla has a good amount of driver assistance and automated safety features, and almost all of them are standard on all trims. They range from forward collision warning and pedestrian detection to lane departure warning and adaptive cruise control.

The features that are not standard are adaptive headlights, rear cross traffic alert, and blind spot monitoring. For the Mazda 3, the features are about evenly split between those that are standard on all trims and those that are limited in availability. The optional features are spread between various trim levels, but the total list is not too different from the Corolla. The optional set has a few extras like traffic jam assist and a heads up display, but these are hardly essential.

Overall, the two cars are satisfactory in terms of safety, and the specific list of features available on each one comes down to more of a trim by trim comparison. They have both gone through recent redesigns so what they have to offer is quite up to date compared to other compact cars in this price range. Combined with the strong crash scores, the safety offerings from both the Mazda 3 and Toyota Corolla are more than enough and don't differ seriously enough to be a dealbreaker.

The 2022 models of the Corolla and the Mazda 3 both start out at a very similar base price point. The top end of the spectrum is different-- the most expensive Mazda is notably more costly than the most expensive Toyota. Additionally, the base trim of the Mazda is a bit under-equipped, and most customers should get the second trim or higher. That second trim adds smartphone integration and a better engine, so it is an important upgrade, but it moves the minimum for the Mazda up a bit more.

For trim recommendations, the Corolla really should have the upgrade engine, which limits it to two of the higher trims. However, even the top trim is only a little more than the Mazda's second trim if you set aside the special edition Apex package. The most expensive Mazda trims are the ones with the top-level turbo engine.

The car that has better value for you will come down to your specific preferences. For example, those who want the absolute best engine performance in this price range will opt for the Mazda 3 in one of the turbo trims. It's hard to find a better engine without getting into luxury cars. In terms of value, both the Corolla and Mazda are fairly inexpensive at their middle trims and the price gap is not large, although the Mazda is usually the more expensive option.

It is worth doing a side by side comparison of different trims to see which one checks off more boxes and gets closer to having your dream feature set. Sometimes, a test drive can be helpful to work out things like which engine feels the best and which infotainment system is more appealing when it is not obvious just from looking at a list of features or reading articles.

Between the 2022 Toyota Corolla and the 2022 Mazda 3, there are two excellent choices for a compact car. Right off the bat, neither of the two cars is objectively superior to the other. Both have a strong case to make, and reviews from critics place both of these models near the top of the compact car class. That alone is an achievement considering how many compact car models are for sale. That means that finding out which one is the better fit is a subjective and individual question, and that configurations, options, and trim levels will play a role in determining it.

The whole Mazda brand is built on a sporty driving experience at a price point below a true sports car. For people who really want to enjoy their experience behind the whee, Mazda has a lot of appeal. The Mazda 3 is also extremely well-equipped in its interior, so it has more to offer than just performance, but there is no denying that performance is the core of the brand.

On the other hand, the Corolla's focus is on reliable, comfortable, and practical transport. It doesn't use much gas and it has a long history of being a dependable model with great value for money. This is why the Corolla is often one of the top-selling vehicles of the year-- it just gets the job done. It still has extras, bells, and whistles, especially at higher trims, but the focus is on the fundamentals.

It is striking that cars with such different designs can wind up so close together in terms of price, but that just emphasizes the importance of test drives and in-person examinations to decide which car feels better. You won't go wrong with the 2022 Toyota Corolla or the 2022 Mazda3, so get into the details of their feature sets to make a decision.