2022 Toyota GR Supra Pros vs Cons. Should You Buy? 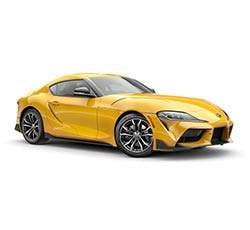 Should You Buy a 2022 Toyota GR Supra? Here Are Some Reasons For and Against

Having spent over two decades off the market, Toyota did a little re-envisioning and rebranding to release the GR Supra for the 2020 line-up. And they did so to much success. Its handling, steering, and snappy acceleration - coupled with an impressive fuel economy for this segment - earned it high marks with car gurus and buyers alike.

Needless to say, not much is new for the 2022 Toyota GR Supra. If it ain't broke, don't fix it. The GR Supra saw the addition of the now-base 2.0 (with its 255 horsepower turbocharged 4-cylinder engine ) to the line-up last year, and this year sees some cool styling cues given to the limited-release A91-CF Edition. You might not be able to get your hands on one, but if you do, you're in for a treat. Its lightweight wheels make it totally track-friendly, and the sport pedals and carbon-fiber body kit make it the GR Supra feel all the sportier.

The GR Supra faces some stiff competition from the likes of Porsche and Ford, but Toyota makes a darn good impression on buyers with the GR Supra. You might not be in the market for a sports car, but you might find yourself wanting one after you get a glimpse at what the GR Supra has to offer.

There are not too many changes to be found on the 2022 Toyota GR Supra. All you will notice is that a carbon-fiber body kit and lightweight wheels have been added to the limited production A91-CF Edition. Other than that, everything else carries over from the 2021 line-up.

1. Plentiful Power from the 3.0-L Engine

While the 2.0-L engine was a good idea on paper, its power just cannot match that of the 3.0-L engine. With a 50 hp difference between these two engines, most buyers feel more rewarded by opting for the V6. Its 382 hp and 368 lb-ft of torque helps the GR Supra get up to 60 miles per hour in a swift 4.4 seconds. While off-the-line traction gets bumped down a notch, the power upgrade made in 2021 was worth it.

The GR Supra is more than adept at handling. Performance is the GR Supra's strong suit, especially after last year's tweaks to the suspension. The revised suspension resulted in the GR Supra having better cornering abilities, enough feedback making its way to the driver's hands, a more natural response, and less oversteering. Overall, the handling should inspire a lot of driver confidence and evoke a sense of thrill.

Sure, the GR Supra is meant to be a speedy little number, but it is also a perfectly capable daily commuter. The sticky tires and responsive brakes make for quick, secure stops on the road. (You'll just want to slap some upgraded brakes on it if you plan to race the GR Supra around on a track.) The Supra doesn't require a whole lot of effort from its driver, which is nice when you're following the ebb and flow of traffic.

4. A Series of Straightforward Controls

Inside of the cockpit, you will find a slew of controls - and there is little guesswork as to what function each one performs. This isn't one of those pretentious, souped-up sports cars that is clearly trying too hard to be next-gen. If you've ever driven any Toyota, the controls should feel familiar. And, if you haven't, the learning curve is short on everything but some of the iDrive infotainment system's menus. Still, even those are manageable.

5. Most Tech Features Are Easy to Use

That being said, the tech features are easy to use once you get the hang of how iDrive works. Voice commands on the navigation system can easily set your route up for you and understand natural speech patterns. And the nav system itself is highly functional. It can even find specific points-of-interest (POIs) without you inputting an actual address. It is actually handier than some smartphone navigation apps and is worth the cost. Also, along with a wireless phone charger, wireless Android Auto and Apple CarPlay are both offered on the GR Supra.

Toyota's adaptive cruise control is one of the most effective systems we have come across lately. This system is more adept at keeping a small gap between you and the vehicle in front of you if that is what you prefer. Of course, it can keep a wider gap too. It caters to your preferences while still offering a buffer of safety.

The GR Supra's fuel economy is nothing short of inspiring. It isn't exactly an area that you'd expect any sports car to excel in, but this car does. Toyota has always been a front-runner when it comes to fuel economy in its non-sports vehicles, but they really set the bar high for sports cars too. The GR Supra's 3.0-L engine gets an EPA-estimated 26 miles per gallon combined (from 24 mpg in the city and 31 mpg on the highway). The 2.0-L 4-cylinder gets an EPA-estimated 28 mpg combined. Both numbers are best-in-class. Porsche and BMW have their work cut out for them here.

The GR Supra oozes luxury for being so sport-oriented. It has some of Toyota's key elements but has a fit and finish inside the cabin that feels more advanced. The carbon-fiber trim that comes in even the base trim is truly a nice touch. And, although the leather seats are not perforated, they have a sophisticated aesthetic. Of course, the A91 Edition has the most sporty aesthetic with carbon-fiber trim everywhere and blue stitching on the leather/faux-suede combo seats.

While bumper-to-bumper coverage could be better, the GR Supra gets better powertrain warranty coverage than most of its peers. It comes with a 5 year/60,000 mile powertrain warranty. There is also free scheduled maintenance for the first two years of ownership that you can benefit from.

10. Cool Styling Cues On the A91 Edition

The A91 Edition really does have the sportiest styling cues of the bunch. Its carbon-fiber mirrors and rear spoiler look athletic, plus there is the sport pedal up front that has a sheen look to it. The blue stitching on the seats is perhaps the most eye-catching physical feature on this edition. Consider yourself lucky if you are able to snag one.

Unfortunately, the leather seats lack perforation, so ventilation is minimal. Without those tiny pockets, heat gets trapped inside of the seats - not fun when you're driving around on a blazing-hot summer day. Wearing shorts on those hot seats is less than ideal.

The GR Supra's dual-zone climate control system is a bit of an odd duck. There really is no clear-cut way to sync the two zones, which is something most vehicles let you do. It also does not have a terribly strong max fan speed, so air circulation might not feel the best.

3. Not the Most Spacious Cockpit

The GR Supra falls behind competitors like BMW and Porsche when it comes to a spacious cockpit. The seats feel somewhat small and crammed together, and there could stand to be more head and leg space for taller folks. Those of average height might even struggle to get in and out since the lightweight doors are somewhat short.

There isn't a lot of utility to this vehicle, which is probably its biggest downside. There isn't as much cargo volume as what you get in other vehicles in this segment. Small item storage areas are few and far between inside of the cabin, making it difficult to find a good place to store your purse or tablet.

A few grand more expensive than the Supra is the 2022 Porsche 718 Cayman. With its superb handling capabilities and an engine that amazingly balances both power delivery and fuel economy, the 718 Cayman is a force to be reckoned with. Porsche's superior build quality helps it stand out among the competition, and there are many - and I mean many - ways to customize it. There are some drawbacks to buying the 718 Cayman though. Tech-wise, it skimps on the list of standard features. And what you do get from the infotainment system is a really awkward interface. Also, you'll have to deal with a bunch of noise coming from both the exhaust and the unrefined 4-cylinder engine.

Another top contender in this segment is the 2022 Ford Shelby GT350. The Shelby is priced quite a bit above the Supra and has too many plastics inside of its cabin, which Ford apparently carried over from its Mustang. The Shelby GT350 does offer a good blend of on-the-track and on-the-road performance, which feels like a rarity for this segment. Additionally, this Shelby absolutely nails it with precision handling. You might also find yourself having a blast with the high-revvin' V8 engine option.

Overall, the 2022 Toyota GR Supra accomplishes the rather large feat of blending powerful performance with fuel economy. The GR Supra comes off as being precise no matter where it is - built for the track but perfectly able to handle daily commutes. The biggest drawback is limited space and utility. But if those are things you can live without, the the GR Supra might just be the sports car for you.