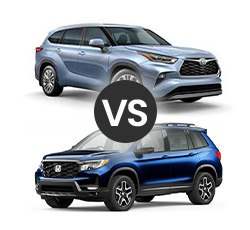 2022 Highlander vs Passport - How Do They Stack Up? Which is Better?

The Toyota Highlander and Honda Passport are two durable SUVs that are comfortable in a variety of conditions. They have powerful engines and good capability, so they can handle many challenges. Plus, they have well-appointed cabins with a lot of built-in technology. They may seem pretty similar from the outside, but there are some notable differences between the two. This comparison will present a detailed look at what makes these vehicles distinct from each other.

Toyota offers two powertrain options for the Highlander, while the Passport only comes with one type of engine. The Passport runs on a 3.5-liter V6 that can generate 280 horsepower and 262 pound-feet of torque. It uses a nine-speed automatic transmission that comes with paddle shifters in case anyone ever wants to be in control over shifting.

Under the hood of the Highlander, there could also be a 3.5-liter V6 engine. The other choice is to have a 2.5-liter engine as part of a hybrid system. The standard powertrain is nearly identical to the one found on the Passport. It has almost exactly the same amount of torque, at 263 pound-feet, and it has slightly more horsepower (295) than what the Passport has. The hybrid system can generate a net horsepower of 243, which is great as well. It works in conjunction with an electronically controlled continuously variable transmission, and the regular V6 uses a direct shift eight-speed electronically controlled automatic transmission.

With both vehicles, fuel efficiency is slightly diminished if all-wheel drive (AWD) has been installed. Out of the three Passport trims, two actually come standard with all-wheel drive, and the other one is available with that type of drivetrain. With AWD comes three modes as part of the Intelligent Traction Management System. Those modes are Snow, Sand, and Mud. Even if a Passport has two-wheel drive, it would still have Snow mode. This can be reassuring to drivers who only rarely have to deal with wintry road conditions.

Hybrid Highlanders have different drive modes. People can choose from Sport, Eco, Normal, and EV modes, depending on what's going on and what their preferences are. Hybrids with AWD have the addition of Trail mode. Non-hybrid Toyota Highlanders with front-wheel drive have Sport, Eco, Normal, and Snow modes. If equipped with all-wheel drive, they would also get to have a Multi-Terrain Select dial. The modes offered with this feature are Mud and Sand, Rock and Dirt, and Normal. If these are offered, it's pretty clear that this SUV was built to handle rough conditions.

There are a few extra components that these SUVs have to improve the driving experience. The Passport comes standard with remote engine start, and it has Active Noise Cancellation so that its cabin feels a little quieter. This system can emit anti-noise signals to cancel out the loud booming noises that might otherwise come from underneath the hood while driving. In addition, the Passport has Hill Start Assist, and its Idle-Stop and Eco Assist features can help with fuel economy.

The Passport can either ride on 20-inch or 18-inch wheels. Up front, it has MacPherson struts, and in the back, there's a multi-link suspension. Front-wheel drive models have a towing capacity of 3,500 pounds, and those with all-wheel drive can haul up to 5,000 pounds.

These numbers are the same as those for the Highlander. A hybrid Highlander can tow up to 3,500 pounds, while all the others have towing capacities of 5,000 pounds. The Highlander has an independent MacPherson front suspension, and in the back, there's a trailing-wishbone suspension. A distinction is that certain Highlander models have been upgraded with a sport-tuned independent suspension for better handling.

Like the Passport, the Highlander has Hill Start Assist Control. Its AWD models have Downhill Assist Control, too, so that their speed can be maintained when traveling down steep slopes. The non-hybrid Highlanders also have an idle-stop function in which the engine temporarily turns off when stopped for at least a few seconds.

The biggest difference between these two SUVs is that the Highlander has three rows of seats while the Passport only has two. The Highlander is able to accommodate up to eight total people, which gives it a big advantage in the eyes of many consumers. Three people can fit in the back seat of the Highlander, with three more being able to fit in the middle seat, if the cabin is set up with a bench seat in this row. Instead, if the Toyota has a pair of captain's chairs, total seating accommodations goes down to seven, with two people being able to sit in the middle row.

It's great that the Highlander has that extra row of seats, but keep in mind that this isn't the most comfortable place to hang out. It only offers 27.7 cubic feet of leg room. There is, though, a generous amount of room in the other rows. The first row has 42 inches of leg room, and the second row provides 41 inches of room in which passengers can stretch their legs.

This is a bit more space than what can be found in the Honda Passport. It has 39.6 inches of rear-seat leg room and 40.9 inches of first-row leg room. This is still a good amount of space, and three people should be fine sitting together in the back row.

It makes sense that there's more cargo room in the Highlander. The cargo hold behind the third row of seats is fairly small, having a volume of 16 cubic feet. It's not very deep, though there is a lot of vertical space. Lowering the third row results in there being 48.4 cubic feet of cargo space, and folding down both the second and third rows would increase total cargo capacity to 84.3 cubic feet. It's nice that that the entire row of seats doesn't have to be folded down at once; instead, just one side can be rearranged if a passenger still needs to be accommodated in that area.

The rear cargo hold of the Passport is generously sized. It has a volume of 41.2 cubic feet. Lowering the rear seatback results in a maximum cargo capacity of 77.7 cubic feet. The rear seat has a 60/40 split configuration, so one, two, or all three seatbacks can be folded down when necessary.

Technology plays a role in the driving experience, especially these days in which almost everyone seems accustomed to doing everything with the help of a screen. Both vehicles come standard with Apple CarPlay, Android Auto, Bluetooth, and large touchscreens. Customers will appreciate all of this high-tech equipment.

Every 2022 Passport features an eight-inch touchscreen, along with HondaLink, SiriusXM, and HD Radio. The first two trims have seven speakers, one of which is a subwoofer. The highest one has a premium sound system with ten total speakers. This trim also has Wi-Fi capability.

To keep devices charged, the Honda company has made wireless charging a standard component of the Passport. Every model has at least four USB ports, too.

Two out of the three Passport trims get to have integrated navigation. It's a satellite-linked program that works together with Honda HD Digital Traffic, and it accepts voice commands so that drivers can keep their hands on their steering wheels.

An eight-inch touchscreen is found in most of the Highlander trims as well. Some, though, can be upgraded with 12.3-inch touchscreens with integrated navigation and 11 JBL speakers. On select models, the eight-inch touchscreen can be paired with navigation and the 11-speaker JBL sound system, too. There are actually many different options available for the Highlander's infotainment system. At the most basic level, several impressive things are included. They include Amazon Alexa, five USB ports, SiriusXM, and Wi-Fi Connect. Wireless charging is standard on select models and optional on a few others.

The Highlander has Driver Easy Speak. Through this program, the driver's voice can be amplified through the vehicle's speaker system. This makes it easy to communicate with those in the back when there's a lot going on in terms of music or conversation.

These companies have incorporated technology into their safety systems. The Highlander comes with Toyota Safety Sense 2.5+, and the Honda Passport comes standard with Honda Sensing Technologies. These two safety packages are very similar, both having automatic emergency braking, lane keeping assist, and several monitoring systems that can warn drivers about various issues.

On the Honda, blind spot monitoring and rear cross-traffic alert are both standard. This provides drivers with additional information so they can make the right decisions at the right times. Also standard are adaptive cruise control, automatic high beams, and a rearview camera.

With the Toyota, blind-spot and rear cross-traffic monitoring aren't integrated into every trim, but they are found on nearly all Highlanders. Higher trims can further be enhanced with front and rear parking assist with a corresponding automatic braking system. The Highlander has the other standard features that the Passport comes with, but it gets to have more systems. One available system mis a ten-inch head-up display that keeps people informed about road signs, their speed, and other important data. Another available component is a bird's eye view camera that provides a 360-degree perspective of what's around the SUV.

Honda starts off the Passport with the EX-L trim, which costs $38,370. For a two-row SUV, this isn't cheap. For this price, a customers would get a memory system for the power-adjustable driver's seat, heated front seats, and leather upholstery. In addition, this trim comes with a power moonroof and a power tailgate.

On the other end of the spectrum, there's the Passport Elite. It costs $45,930. Its notable exterior upgrades include rain-sensing wipers, auto-dimming and power-folding side mirrors, and a hands-free power tailgate. It treats those in the first row to heated and ventilated front seats, and people riding in the back have heated seats as well. Even the steering wheel has a heating element.

The base trim of the Highlander has similar advantages. Like the Passport, the Highlander has tri-zone climate control, and it has a power-adjustable driver's seat. However, this entry-level trim does not have a power liftgate, moonroof, heated seats, or leather upholstery. This first trim, which is called L, costs $35,855.

The next trim, which is priced at $38,055, does have a few extra amenities, putting it more in line with what the Passport offers. That being said, it's still doesn't has as many features as found in the entry-level trim of the Passport.

Sitting at the top of the Toyota Highlander lineup are the Platinum and Hybrid Platinum. They're priced at $48,010 and $49,510, respectively. They have 12.3-inch touchscreens, panoramic moonroofs, and all-around monitoring systems. They've been upgraded with leather upholstery, heated and ventilated front-row seats, and heated second-row seats.

Both of these SUVs are capable and well-equipped. They have nice technology packages, and they can actively work to keep passengers safe.

There are many more options for the Highlander, including several hybrid trims. If anyone wants to conserve gas, one of these hybrids would be the way to go. Another main advantage that the Highlander has is a third row of seats. Potential buyers who need extra seating will definitely lean towards the Highlander, even though its last row isn't that spacious.

On the other hand, the Passport has so much to offer, and it will please a lot of customers with its high-end features. As long as people can afford it, it should prove to be a solid two-row SUV.