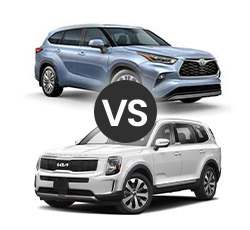 2022 Highlander vs Telluride - How Do They Stack Up? Which is Better?

The Toyota Highlander feels pretty similar to the Kia Telluride. Both SUVs have three rows of seats and feature capable powertrains. They feel somewhat rugged while also offering a comfortable ride, so they're practical for a variety of customers.

There are 11 trims of the Highlander, five of which are hybrids. Kia doesn't provide as many options, as there are only four trims for people to choose from. The Telluride is the more affordable model, but is the extra cost of the Highlander justified? This detailed comparison will address that question and several others that potential buyers may be wondering about.

Toyota makes two types of Highlanders. One type runs on a traditional powertrain, while the other relies on a hybrid system.

The standard engine is a 3.5-liter V6 that can make 295 horsepower and 263 pound-feet of torque. This is a nice amount of capability that many will appreciate. This engine works in cooperation with a direct shift eight-speed electronically controlled automatic transmission. Both front-wheel and all-wheel drive are available. With all-wheel drive, a Highlander could also have a Multi-Terrain Select feature that comes with mud and sand, rock and dirt, and normal driving modes.

An alternative to the V6 is a 2.5-liter engine that works together with an electric motor and an electronically controlled continuously variable transmission. This hybrid system yields a net horsepower of 243, so it's not quite as powerful as the regular engine.

If a hybrid is set up with front-wheel drive, it would have two electric motors powering the front wheels. If a hybrid Highlander is an all-wheel-drive version, it would have two electric motors in the front and one additional motor powering the rear wheels. Hybrid Highlanders have sport, eco, EV, and normal modes, with all-wheel-drive hybrids having trail mode, too.

Most Highlanders have a fairly standard suspension. However, the XSE trim gets to have a sport-tuned suspension. This means that it can exhibit better handling, especially when taking turns and driving at higher speeds. This type of stiffer suspension is often preferred by those who prefer driving more aggressively and pushing their vehicles a bit harder than others may.

A few Highlander trims have special all-wheel drive systems called Dynamic Torque Vectoring AWD. With this equipment, an SUV send more power to the left or right rear wheel, depending on the situation. As a result, the vehicle can show enhanced control and performance.

There doesn't seem to be as much variation within the lineup of the Kia Telluride, at least in terms of what's under the hood. All four trims run on the same type of engine. It's a V6 with a displacement of 3.8 liters. It can make 291 horsepower and 262 pound-feet of torque. These numbers are almost identical to those of the non-hybrid Highlander. Kia has paired this V6 engine with an electrically controlled eight-speed automatic transmission, which is basically the same as the one found in the standard Toyota Highlander.

Customers shopping for a Telluride can choose from front-wheel or all-wheel drive. The all-wheel-drive system comes with AWD lock and snow mode. All trims have torque vectoring cornering control as well as four drive modes, which are comfort, eco, sport, and smart.

One interesting component that's available in the Telluride is a self-leveling rear suspension. This can even out the cabin of the Telluride if the tail end is weighed down with heavy cargo.

These SUVs are sizable, but not too unwieldy. The Telluride is the larger of the two, by a small margin. It's about two inches longer than the Highlander is, and it's a few inches wider and a touch taller as well. Both models sit eight inches off the ground, which gives them a good height.

As one would imagine, the larger size of the Telluride translates into it having more interior space. It has 41.4, 42.4, and 31.4 inches of leg room in its first, second, and third rows, respectively. That third row isn't that roomy, but it's bigger than what the Highlander offers.

In the Toyota, third-row passengers only have 27.7 inches of leg room. This would certainly make for a tight squeeze for adults and taller children. Space in the other rows of the Highlander isn't an issue, with there being 41 inches of second-row leg room and 42 inches of first-row leg room.

There is a way to make the cabins of these vehicles feel more spacious. Instead of a bench row in their middle rows, they could have a pair of captain's chairs. With this set up, there would be an open area in the middle of the cabin, and this could make it easier for passengers to spread out a bit.

In terms of carrying cargo, it's a similar story. The Highlander can hold plenty, just not as much as the Telluride can. The Toyota's maximum cargo capacity, when the rear seats have been folded down, is 84.3 cubic feet. Behind its second row of seats, it has 48.4 cubic feet of cargo space, and there is 16 cubic feet of storage space in the back, behind the last row of seats.

Maximum cargo capacity in the Kia Telluride is 87 cubic feet. It has 46 cubic feet of space behind its second row, which is not as much as the Highlander offers. However, it has more space in the back. Behind its third row of seats, it has 21 cubic feet of storage space. This will make it the more practical choice for some potential buyers.

Both models can be upgraded with heated second-row seats and ambient lighting. The Telluride is available with ventilation in its second row and a heated steering wheel. Further, these SUVs can have auto-dimming rearview mirrors to make it easier to see other vehicles at night. A higher trim of the Highlander could have a digital rearview mirror that displays a live video feed using a rear-facing camera at the back of the vehicle.

One of the great things about these two vehicles is that they're packed with high-tech components. The Highlander comes standard with five USB ports and is available with wireless charging. It can either have an eight-inch or a 12.3-inch touchscreen with Android Auto, Apple CarPlay, and Amazon Alexa. The larger touchscreen is automatically equipped with navigation. Navigation isn't available on the lower trims, but it can be added on to mid-level trims, even if they have the smaller touchscreen. Lower trims have six speakers, while higher trims could have up to 11 JBL speakers to enhance audio quality.

Each 2022 Kia Telluride has a 10.25-inch touchscreen with navigation, so this gives it an advantage over the Highlander. Again, Android Auto and Apple CarPlay are standard, but the Kia does not have Amazon Alexa. It, too, starts out with a six-speaker sound system, and its higher trims have ten Harman Kardon speakers. The Telluride can either have a total of six or seven USB ports, and most of its trims have wireless charging.

Technology plays a major role in the safety systems of the Highlander and the Telluride. They both have an impressive set of driver-assist mechanisms that can actively work to help prevent certain types of accidents from occurring. Pre-collision warning, automatic emergency braking, and lane keep assist are all standard in both models.

One difference is that the Telluride comes standard with blind spot monitoring and rear cross-traffic alert. Not only that, it also has mitigation abilities that go along with those monitoring systems. In other words, the Telluride doesn't just warn drivers about vehicles that drivers may not be able to see; it can hit the brakes or correct steering so that a driver hopefully doesn't hit a vehicle that he/she wasn't aware of. On the Toyota, blind spot and rear cross-traffic monitoring are standard on all the trims except the base model, but there isn't a corresponding mitigation component.

Further, the Telluride has some additional programs. One of them is called Safe Exit Assist. It lets passengers know when it's safe to open the doors and exit the vehicle after it's been parked. This can be useful after parallel parking on busy city streets. Another one is called Driver Attention Warning and helps to ensure that people are focused on the roads.

The two models can be upgraded with some advanced components. They include a surround view monitor and a head-up display. The Telluride can be set up with a blind-spot view monitor, too.

Both SUVs are fortunate to have adaptive cruise control. On the Telluride, the program is pretty advanced, as it can even use navigation information to predict when the vehicle should slow down, such as when a curve is up ahead.

As mentioned at the top of this overview, the Kia Telluride has the lower price out of these two models. The Kia starts out with a cost of $33,390. This isn't that high, considering all the capability and technology that the base trim has to offer. The most sophisticated Telluride trim is the SX, and it costs about $43,300.

The L trim of the Highlander is the most budget-friendly one available. It costs $35,855. There are modest price increases when moving up through the lineup, with hybrids costing about $1,500 more than their non-hybrid counterparts. The nicest trim available is the Platinum. It costs approximately $48,000, and the Hybrid Platinum has a price of $49,510.

Clearly, the Toyota model is more expensive than the Kia. They have roughly the same amount of capability, and the Kia is actually the one that offers more room and a more comprehensive standard safety and technology package. The Telluride and Highlander have some great interior features and rugged yet modern vibes, but the Telluride wins when it comes to value.

In many ways, the Kia Telluride has more to offer than the Highlander does. It would be a smart choice for someone who wants to find a good deal but doesn't want to compromise anything along the way. The Kia is packed with advanced equipment and has a comfortable cabin, so it's going to make sense for many customers in need of three-row SUVs.

However, if a buyer is specifically looking for a vehicle that is efficient, then the Highlander would be the better choice. It comes in multiple hybrid trims that do a relatively good job of conserving fuel.

Another point working in favor of the Highlander is that it's offered in some more unique trims. The XSE has sport suspension, several higher trims can be upgraded with dynamic torque vectoring AWD, and the Bronze Edition, for instance, has some exterior details that help it to stand out in a crowd.