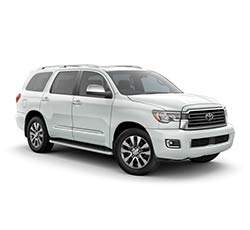 What 2022 Toyota Sequoia Trim Should You Buy? What is the Difference Between Trims?

The Toyota Sequoia is an SUV that has excellent capability and plenty of interior space. This vehicle is tall and athletic, and it has a good amount of technology built into it. With three rows of seats, it should please those who frequently travel with a lot of passengers. Many of its components feel upscale, and with there being six trims, potential buyers have a lot to consider.

Every trim uses the same type of engine. It's a 5.7-liter V8 that comes with a six-speed electronically controlled automatic transmission. The engine can make 381 horsepower and 401 pound-feet of torque, so power certainly isn't an issue. The standard drivetrain is a rear-wheel-drive system, and multi-mode 4WD with a limited-slip center differential and locking feature is available.

Compare the SR5 vs TRD Sport Trims. What is the difference?

The TRD Sport rides on 20-inch aluminum alloy wheels while the SR5 only has 18-inch wheels. Both trims have LED headlights, LED Daytime Running Lights, and LED fog lights. The fog lights on the SR5 have a dark silver surround, while those on the TRD Sport have chrome surround. That dark silver is found on other places on the SR5, including around the grille and on the bumper. In those locations on the TRD Sport, there are chrome or black accents instead.

On both trims, the outside mirrors have heating elements integrated into them. This can be very useful during the winter. The mirrors on the TRD Sport are black instead of color-keyed as they are on the SR5. More black is included with the TRD Sport's Toyota emblems, special trim logos, running boards, and roof rack. On the SR5, the badging is chrome.

It's really great that the Sequoia comes standard with a power moonroof. This can help the cabin feel more open and spacious, and the moonroof can let in some fresh air when it's slid open or tilted up.

Other impressive standard features include tri-zone climate control, a power-adjustable driver's seat, and the smart key system. Both trims have fabric upholstery with the option to get leather and heated front seats.

An important distinction is that the SR5 is set up with an eight-passenger configuration, having a bench seat in its middle row. In contrast, the TRD Sport has second-row captain's chairs. This results in it having room for seven people. Customers will have to decide which type of seating arrangement they prefer. Either way, the seats are designed to be folded down and lifted back up easily and quickly.

The technology packages on these trims are identical. They include seven-inch touchscreens, eight speakers, Apple CarPlay, Android Auto, Bluetooth, Amazon Alexa, and SiriusXM. With the SR5 and TRD Sport, there's the opportunity to upgrade to a system with dynamic navigation and advanced voice recognition.

Likewise, the safety components on the TRD Sport are the same as those found on the SR5. There's an array of driver-assist technologies that are ready to take action on behalf of the driver, and blind spot monitoring and rear cross-traffic alert are both standard.

Compare the TRD Sport vs Limited Trim Levels. What is the difference?

Moving to the Limited is associated with getting more luxurious finishes. However, it also results in having the traditional suspension system rather than the special one that comes with the TRD Sport. The Limited, though, does have 20-inch wheels. The TRD Sport has black alloy wheels while the Limited has split-spoke ones with dark silver accents.

One of the major ways in which the exterior of the Limited has been enhanced has to do with its liftgate. It has a power-operated liftgate with jam protection; this can be convenient to use when loaded down with gear.

Other exterior differences are minimal. For instance, the Limited has chrome body side molding, chrome logos, chrome doorhandles, and chrome outside mirrors. Those mirrors are advanced in several ways, as they have integrated turn signal indicators and a power-folding feature. The running boards on the Limited are black, like the ones on the lower trims, but they have a color-keyed surround.

Inside the cabin of the Limited, there are eight total seats that are covered in leather. There is the option to get captain's chairs in the middle row. Front seats are heated, and both are power-adjustable. In contrast, only the driver's seat on the TRD Sport is power-adjustable.

In the back, the third row is power-reclining, and it can fold completely flat. These types of seats are optional on the lower trims as part of a package. Otherwise, they would be fabric seats that have a manual recline function; they would also be able to fold flat. The second and third rows of the Limited have retractable window sunshades, and up front, there's an auto-dimming rearview mirror with HomeLink and a compass. This type of mirror is optional on the TRD Sport and SR5.

Even the sun visors have been improved on the Limited. They have illuminated vanity mirrors and secondary visors. In the cargo area on this trim, a cargo net is standard to help with organization.

Many buyers will appreciate the more comprehensive infotainment system on the Limited. It has a premium audio package with 12 speakers, and it comes standard with navigation in addition to all the other elements that the TRD Sport has. The Limited is available with 14 JBL speakers with Clari-Fi technology if anyone wants to enjoy even better audio quality.

Compare the Limited vs Nightshade Special Edition. What is the difference?

The Nightshade Special Edition is similar to the Limited in many ways, but it has a more aggressive style. It has black wheels to match its black running boards, black roof rack, black door handles, and black badging. Its mirrors are black, too, and they have a power-folding feature, turn signals, and built-in heating like the mirrors on the Limited do. The Nightshade Special Edition has darkened chrome on its body side molding and around its bumper and LED fog lights.

It might not come as a surprise that there is more black inside the cabin of the Nightshade Special Edition. The seats are black leather, and this trim is only available with captain's chairs in the middle row. Remember that the Limited is available with eight-passenger or seven-passenger seating, giving people some flexibility.

Compare the Nightshade Special Edition vs Platinum Trims. What is the difference?

The Platinum offers a more comfortable ride in that it has advanced suspension. Specifically, it has electronic modulated air suspension and adaptive variable suspension. It's the only trim in the Sequoia lineup to have these elements.

Unlike the Nightshade Special Edition, the Platinum is decked out with chrome exterior accents, and it has a silver roof rack. Instead of black wheels, it has ones with silver accents. Plus, its side mirrors have three extra abilities. They can display puddle lights as a type of welcoming sign, they can remember someone's preferred position, and they have a reverse tilt-down function that can come in handy when parking.

The Nightshade Special Edition feels fairly refined with its leather seats. At the Platinum level, sophistication is taken up a notch. This trim has perforated leather seats, with the front seats being heated and ventilated. The driver's seat comes with power thigh and lumbar support, too. Further, the second row has heated captain's chairs.

Those sitting in the back on long road trips will be happy that the Platinum comes standard with a rear-seat entertainment system. The system consists of a Blu-ray Disc player, a nine-inch display, two wireless headphones, a remote control, RCA jacks, and a 120-volt AC power outlet.

The infotainment package on the Platinum has been upgraded as well. It provides the vehicle with 14 JBL speakers instead of 12 speakers. This is an option on the Nightshade Special Edition.

Compare the Platinum vs TRD Pro. What is the difference?

With several special touches, the TRD Pro looks a little different than the others. Its the only trim to have the TRD Pro front skid plate, and it actually has smaller wheels than the Platinum does. Its black BBS forged-aluminum TRD Pro alloy wheels measure 18 inches instead of 20 inches.

Beyond this, the TRD Pro has TRD Fox shocks with piggyback reservoirs. This trim is only offered as a 4WD model, so it's definitely a vehicle that's been made with adventure-minded drivers in mind.

Unique to the TRD Pro are Rigid Industries LED fog lights. These are highly effective when visibility is low, and they enhance the overall appearance of this trim. Other things that complete the look are black TRD Pro logos, a black Toyota emblem, black cast aluminum running boards, and a black TRD roof rack.

One of the features on the Platinum, though, has been taken away on the TRD Pro. The TRD Pro doesn't get to have the futuristic outside mirrors that have memory, reverse tilt-down, and puddle lamps.

It's a similar story inside the cabin of the TRD Pro. It's actually not quite as nice as the one in the Platinum. It has regular leather instead of perforated leather, and its front seats have heat but not any ventilation. The seats on the TRD Pro are black leather and have red contrast stitching. Up front, the TRD Pro logo has been stitched into the headrests.

With the TRD Pro, the only option is a seven-seat configuration, and it doesn't have the same maple-style accents as seen in the Platinum. It doesn't have retractable window sunshades, nor does it have the Blu-ray Player and rear display. What it does have are TRD Pro all-weather floor mats and a TRD shift knob. The TRD Pro does get to have the same infotainment package as the Platinum does, which includes navigation and a JBL premium audio system wth 14 speakers.

There is a good range of trims with the 2022 Toyota Sequoia. The mechanical differences are minimal since they all run on the same type of engine. Unless someone is using the Sequoia in particularly rough conditions, the standard suspension should get the job done adequately.

It's also nice that Toyota has given the Sequoia a full set of driver-assist technologies and a solid infotainment package. If people want navigation, they'll have to pay extra for that, but the standard package should please most people.

The base trim, which is the SR5, should be more than satisfactory when it comes to power, size, and technology. However, it lacks some details that some customers may prefer, such as heated front seats, navigation, and leather upholstery. For this reason, the Limited is the one to pick. It has all of those sought-after features, in addition to a few others, and it can either have seven or eight total seats. It strikes the right balance between luxury and practicality.