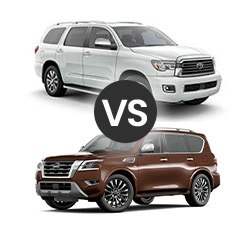 There’s still a demand for large, truck-based SUVs. Aside from providing more space for big families, these powerful brutes are also great for towing and off-roading. The 2022 Toyota Sequoia and the 2022 Nissan Armada are two of the segment’s top options.

Neither vehicle receives any major updates for the 2022 model year. Last year, the Armada received a stylish refresh and an updated infotainment system. Both SUVs also welcomed a blacked-out trim to their respective lineups. In this head-to-head comparison, we’ll find out whether the 2022 Toyota Sequoia or the 2022 Nissan Armada is the better choice.

The Sequoia returns for 2022 with the same stout powertrain, which has a reputation for being durable and easy to maintain. A robust 5.7-liter, V8 engine supplies the SUV’s muscle. It’s rated to squeeze out 381 horsepower and a useful 401 lb-ft of torque. Drivers can expect the Sequoia’s six-speed automatic gearbox to shift smoothly. When tested, this SUV recorded a decent 0-60 mph time of 7.4 seconds.

A 5.6-liter, V8 engine comes equipped on all versions of the 2022 Nissan Armada. It outmuscles the Sequoia’s engine by developing 400 hp and 413 lb-ft of torque. A nine-speed automatic transmission helps the SUV to achieve maximum performance. Test drivers rave about the Armada’s excellent passing power. A 0-60 mph time of 6.7 seconds puts the Armada among the segment’s quickest models.

While the new Armada is indeed quicker than the Sequoia, most drivers won’t have any complaints about the Sequoia’s performance capabilities. It’s powerful enough to climb hills with ease. Both SUVs produce ample low-end torque, which allows drivers to experience effortless acceleration. The Nissan Armada does have a higher tow capacity. Nissan rates this SUV to tow up to 8,500 pounds. By comparison, Toyota designed the Sequoia to handle up to a 7,400-pound load.

Keep in mind that the Armada requires premium fuel in order to develop peak power. The use of regular unleaded gasoline decreases engine output to 390 hp and 394 lb-ft of torque. Meanwhile, the Sequoia only needs to be fed regular gasoline.

Like the Sequoia, the Armada comes standard with rear-wheel drive. This is an ideal setup for folks who don’t live in snowy areas. On the other hand, people who need the utmost traction can step up to a 4X4 system.

A sturdy, body-on-frame design makes the Armada rugged enough for most drivers. It will perform well on he majority of off-road trails. However, no version of the Armada is quite as adventurous as the Sequoia TRD Pro. Special Fox shock absorbers and a front skid plate help it to confidently maneuver over more challenging terrain.

When traveling on paved roads, drivers will especially appreciate the Armada’s excellent brakes. This SUV recorded a 60-0 mph braking distance of 123 feet, which means it can stop just as quickly as many smaller SUVs. The Sequoia recorded a less impressive 60-0 mph braking distance of 134 feet. Whether a deer suddenly crosses their path or another motorist cuts them off, Armada drivers will have an extra sense of security.

From a standpoint of long-term reliability, the Toyota Sequoia continues to sit atop the class. It has an above-average dependability rating. Owners can expect the Armada to be almost as dependable. In terms of warranty coverage, neither vehicle has an edge over the other. They both receive a 36,000-mile bumper-to-bumper warranty and 60,000 miles of powertrain coverage.

Despite its massive proportions, the 2022 Nissan Armada is an easy vehicle to drive on the open road. While drivers will need to watch their speed when approaching sharp curves, this SUV feels secure and stable in most situations. Most automotive evaluators find the Sequoia to be just as satisfying to drive. However, a tighter turning circle makes the Armada a bit easier to maneuver in congested areas.

Drivers who aren’t off-road enthusiasts will be interested in the Sequoia TRD Sport. It features a more athletic suspension with Bilstein shock absorbers. Handling will be a bit more responsive on the street. A sports-tuned suspension is not offered on the Armada.

The 2022 Toyota Sequoia has a plush ride quality, thus making it a good vehicle for extended road trips. A well-tuned suspension enables the Sequoia to rival the ride comfort of a genuine luxury vehicle. Toyota equips the top-of-the-line Sequoia Platinum with an adaptive air suspension.

Travelers will also enjoy the softness of the Armada’s ride. However, the SUV doesn’t manage big bumps quite as well as the Sequoia. This is especially true for Armada trims equipped with upsized wheels.

Whether car shoppers choose the Armada or the Sequoia, they can look forward to traveling in a quiet cabin. Both SUVs do a fine job of suppressing wind and road noise. Riders will experience peacefulness throughout the day.

The Sequoia’s boxy profile and tall windows help enhance outward visibility. Drivers will be able to obtain a good view of their surroundings. According to some car reviewers, the Armada’s big side mirror and thick roof pillars in the front can hinder visibility when making left turns.

Both of these full-size vehicles are designed to carry up to eight passengers. While the Sequoia provides an extra 0.6 inches of legroom in the front, passengers will find the available second-row legroom is quite similar. Among the Sequoia’s biggest advantages is its more spacious third-row seat, which provides nearly an extra 7.0 inches of legroom. Only small children will find the Armada’s third row to be sufficient.

Furthermore, Nissan does not offer the Armada with a sliding second-row seat. Not only does the absence of this feature prevent passengers from further expanding the available legroom, but it also makes accessing the third-row seat a bigger challenge.

Taller drivers will find both of these SUVs to be a good choice. They will have ample head- and legroom. A tilt-and-telescoping steering wheel also makes it easier for drivers to obtain a relaxing position. While the Sequoia provides comfortable accommodations, the new Armada offers a greater sense of luxury. Only the Armada gives buyers access to quilted leather upholstery.

Both of these SUVs are equipped with an easy-to-use infotainment system. However, the Armada’s unit looks more appealing. Its 12.3-inch touchscreen dwarfs the Sequoia’s 7.0-inch touchscreen. Also, only the Armada’s interface provides iPhone users with wireless Apple CarPlay.

More cutting-edge safety features are available for the Armada. Standard rear automatic braking gives drivers more protection when backing out of parking spots. You won’t find this advanced technology on the Sequoia. Meanwhile, a driver attention monitor watches for signs of drowsiness.

Another one of the Armada’s exclusive features is its rear-door reminder system. It helps keep drivers aware of children who may be peacefully sleeping in the backseat. Busy parents will appreciate the extra security.

The Armada also comes equipped with a more advanced blind-spot monitor. If the driver attempts to change lanes when another vehicle is approaching, this system is intelligent enough to activate the brakes and help steer the SUV back into its lane. Drivers can also take advantage of the Armada’s available digital rearview mirror, which is designed to enhance the driver’s field vision by further reducing the number of blind spots.

As expected, both of these SUVs come standard with a backup camera. However, Nissan offers the Armada with a surround-view camera system. Its 360-degree view will improve the driver’s ability to spot parking lot obstructions. Moving object detection is built into the system.

Because of the base Armada’s lower sticker price, it proves to be a slightly better value than the base Sequoia. These entry-level trims have a similar list of standard equipment. A few of the common features include an integrated Wi-Fi hotspot, proximity keyless entry, and a touchscreen infotainment system. While some buyers will find the Sequoia's sunroof to be an appealing amenity, the Armada counters with standard navigation and a power-adjustable steering wheel.

It’s a close match between these big SUVs. Both come standard with a monstrous V8 engine. While the 2022 Nissan Armada has a higher towing capacity, most drivers will find the Sequoia’s 7,400-pound towing capacity to be suitable enough.

Both SUVs feature a truck-based frame, which translates to enhanced off-road capabilities. The Armada can easily handle the task of taking families on a weekend camping adventure. However, Toyota engineers the ultra-rugged Sequoia TRD Pro to conquer more daunting terrain.

For most families, the Armada will be spacious enough. However, a much tighter third-row seat puts the Armada at a clear disadvantage against the Sequoia. If you don’t need to seat more than five adults, the Armada will prove to be just as satisfying.

The Armada’s list of available tech is more impressive. Aside from providing a nicer infotainment system, it also offers quite a few exclusive safety innovations. While the Sequoia is an attractive SUV, some drivers will favor the Armada’s fresher exterior styling.

In the end, the 2022 Nissan Armada slightly nudges by the 2022 Toyota Sequoia. It has a more modern interior, boasts a higher tow rating, and provides more advanced safety features. However, choosing the Toyota Sequoia is not a bad decision either. Many car shoppers will appreciate the Sequoia's solid reliability and adult-friendly third row.