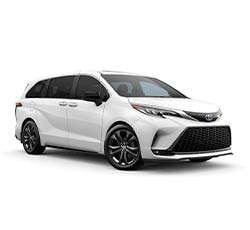 What 2022 Toyota Sienna Trim Should You Buy? What is the Difference Between Trims?

Before the rise of the three-row SUV, the minivan was the obvious choice for families with more than one or two kids. Now, minivans have to be better than ever if they want to compete. Some options out there do a better job of this than others.

Critics agree that the Toyota Sienna is one of the best minivan options on the market. It offers hard-to-match fuel economy, plus a comfortable and well-equipped cabin. Drivers will appreciate the responsive handling and the fact that the suspension can absorb most of the bumps in the road. This is also one of the few minivans out there that currently offer all-wheel drive.

In 2022, the Sienna is getting a brand new trim option. This adventure-themed model is meant to tempt buyers who are looking at the three-row SUV segment of the market. This brings the total number of 2022 Toyota Sienna trim levels to six.

With so many options, buyers may struggle to decide which one is right for them. The following is a complete breakdown of the six trim levels to help simplify things.

Compare the LE vs XLE Trims. What is the difference?

All models of the 2022 Sienna are working with a hybrid 2.5L engine. It creates 245-horsepower, which some people feel is not quite enough to move this minivan around with any enthusiasm. It does have the Sienna seeing 36mpg in the city and 36mpg on the highway, however. These are incredible numbers for the class. A continuously variable transmission comes standard. The LE comes with front-wheel drive, but it is eligible for an upgrade to all-wheel drive.

The exterior of the Sienna LE is home to automatic on/off LED headlights and LED daytime running lights. LED taillights are found on the back. The LE has color-coded and heated side mirrors, along with color-keyed door handles. This entry-level model sits on 17-inch alloy wheels and makes an entrance with a black grille.

On the more practical side, Toyota gives all Sienna models power-sliding rear doors. Inside, there is tri-zone automatic climate control, 18 cupholders, and a push-button start. The upholstery is cloth, and the driver gets eight-way power adjustment. In its standard configuration, the Sienna LE seats up to eight.

A 4.2-inch multi-information display comes standard. There are also an impressive seven USB ports scattered throughout the cabin. Six of these ports are for charging only. Further adding to the convenience of the Sienna LE is the 12V DC outlet. For the infotainment system, buyers will find a 9-inch touchscreen that is compatible with both Android Auto and Apple CarPlay.

The Sienna has a good deal of standard safety equipment. The LE has tire pressure monitoring, hill start assist, and ten airbags. It also has Toyota Safety Sense 2.0, which bundles lane departure alert with steering assist, a pre-collision system with pedestrian detection, automatic high beams, lane tracing assist, traffic sign recognition, and full-speed adaptive cruise control. Blind-spot monitoring is not part of that bundle, but it is also standard for the 2022 Sienna.

To gain a little bit extra to the entry-level Sienna, buyers can add the LE Plus package. It has an auto-dimming rearview mirror, an eight-speaker audio system, and a wireless charging pad. For the exterior, the package throws in black roof rails and a sunroof.

Many of those features become standard when looking at the XLE trim level. It makes no changes underneath the hood, and it sticks with the 17-inch wheels. This trim level does have the option of going with 18-inch wheels, unlike the LE. The sunroof becomes standard at this trim level. The XLE is also home to integrated wide-angle LED foglights. As for the sliding doors, they get even more sophisticated by adding a hands-free function. The liftgate is powered for the XLE and higher as well.

The cabin of the XLE gives drivers four-zone automatic climate control. Heated front seats and synthetic leather upholstery are also standard, along with four-way power adjustment for the front passenger. The steering wheel is wrapped in leather, and the rearview mirror is auto-dimming. One of the more impressive upgrades found here is the remote illuminated entry feature, making it easier to get in the Sienna XLE after dark.

There are not many tech upgrades to find inside this trim. The stereo system does go from six speakers to eight. Buyers may be attracted to the XLE for its standard front and rear parking assist with automatic emergency braking.

Like the LE, the XLE has its own exclusive package. Opting to go with the XLE Plus version of the Sienna will mean getting black roof rails, integrated navigation, and wireless device sharing. It also has a 12-speaker JBL premium sound system. Starting with the XLE, buyers can also choose to add a rear-seat entertainment system that includes a single rear overhead display and two pairs of wireless headphones.

Compare the XLE vs Woodland Edition. What is the difference?

Going with the Woodland Edition will mean getting standard all-wheel drive. This model also increases its ground clearance to help give it a bit more capability. It would be a stretch to call this an off-road-ready vehicle, however. The Woodland Edition has 18-inch bright wheels.

The exterior of this Sienna stands out with black roof rails with black cross bars, a black AWD badge, and black Toyota badging. A towing hitch receiver and a wiring harness with a 4-pin connector are also standard for the Woodland Edition. This version of the Sienna can tow up to 3,500 pounds, which is decently impressive for a minivan.

Inside, this trim level comes standard with a wireless device charging pad. It also has a 1500W inverter with two outlets, presumably to make the Sienna more useful on a camping trip. The Woodland Edition has an upgraded infotainment system, which includes the 12-speaker audio system. This is the first Sienna to come standard with Driver Easy Speak, a handy tool for parents that utilizes a microphone to project the driver's voice through the rear speakers. There are no upgrades to the safety features of this Sienna.

Compare the Woodland Edition vs XSE Trims. What is the difference?

The XSE loses its standard all-wheel-drive, but it remains an option. Exterior lighting is similar, but this model does get LED-strip daytime running lights that make it look a bit fancier. It also has what Toyota calls "premium LED taillights." In the front of the Sienna XLE is a metallic black sport mesh grille.

The side mirrors are black rather than body-colored. Dark 20-inch wheels are underneath the XSE. While they look nice, some would argue that they reduce the ride quality. The badging that was black on the Woodland Edition is now chrome. Roof rails are downgraded to available rather than standard.

Interestingly, the wireless charging pad is also not standard when going up to the XSE. The 1500W inverter is also available for this trim. The XSE goes back down to eight speakers rather than 12. Buyers can get these features back by adding the XSE Plus package, which consists of the JBL sound system, wireless device charging, and even the black roof rails.

Compare the XSE vs Limited Trims. What is the difference?

The Limited trim of the 2022 Sienna is where things get even more luxurious. This trim level has a dark gray metallic grille. The side mirrors are auto-dimming, have puddle lights, and even have a memory function to make sharing the Sienna easier. Wheel size is reduced back down to 18-inches. Chrome roof rails are standard, along with chrome accents on the bumpers and badges. A hands-free power liftgate with jam protection becomes available for this trim.

Wireless device charging is back for the Limited, which is also the first trim to have an optional digital rearview mirror. This feature uses a camera and displays the feed on the rearview mirror, providing an unobstructed view of what is behind the Sienna. Drivers can turn this feature off if they prefer.

The seats inside the Sienna Limited are both heated and ventilated. For the driver's seat, memory functions are added. The second-row gets ultra-comfortable, thanks to extendable footrests that make it easy to stretch out. While all models have manual second-row sunshades, the Limited is the first to add sunshades for the third row.

A 7-inch multi-information display replaces the 4.2-inch one found on lower models. It gives drivers the same info, such as any warning displays and fuel economy, but makes it easier to read at a glance. The cupholders in the center console are illuminated to give the Limited a more upscale feel. The 12-speaker audio system is back and standard for the Limited trim level of the 2022 Sienna.

Compare the Limited vs Platinum Trims. What is the difference?

The Platinum trim level of the Sienna has just about everything this minivan offers in 2022. It shows off signature Bi-LED projector headlights and exclusive 18-inch metallic wheels. This trim level is the only one to give drivers rain-sensing windshield wipers. Oddly enough, the hands-free liftgate remains only optional rather than standard.

A bird's eye view camera system is part of the equipment found on the Platinum trim. It will give drivers a 360-degree overhead view and can also do a perimeter scan. A heated steering wheel is also standard, plus heated second-row seats. The Platinum trim also has an exclusive "premium leather" for its upholstery.

With the exception of the camera system, the Platinum model of the Sienna makes no technology or safety upgrades.

The 2022 Toyota Sienna has a slightly higher than average starting price, meaning that buyers will likely want to stick to the lower half of the trim ladder. Considering that all models have the same powertrain and the fact that Toyota Safety Sense is standard, that should not be too hard to do. The LE is a respectable choice, but buyers should step up one more level to get the most out of their Sienna.

Choosing the Sienna XLE will mean adding heated front seats, a power rear liftgate, four-zone automatic climate control, and more. These are features that will actually improve a driver's quality of life, rather than the bells and whistles that are found on higher trims.

The only higher trim that will be worth considering for some is the Woodland Edition. With its standard all-wheel drive and increased towing capacity, this version of the Sienna may be able to handle the camping needs of some families. Considering the fact that the Platinum model costs over $15,000 more than the entry-level LE, it is safe to say that many drivers will avoid it.

The 2022 Toyota Sienna XLE is a well-equipped minivan that has what the modern driver needs to keep their family happy on the road.