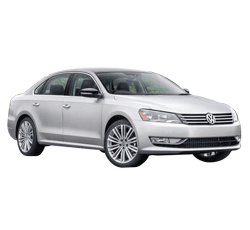 The Top 10 Reasons Why You May want to Buy a 2014 Volkswagen Passat:

Savvy car shoppers in today’s highly competitive automotive market have a literal treasure trove of options when it comes to choosing a solid, reliable midsize family sedan. For starters, there are the seemingly safe and predictable choices in the form of the Honda Accord and Toyota Camry. Some shoppers tend to branch out by adding Hyundai, Nissan and Kia to their list or buy American courtesy of the Ford Fusion or Chevy Malibu. For years, European car makers have been noticeably absent in the growing list of mainstream players in favor of the more upscale premium markets – that is, save for one.

The 2014 Volkswagen Passat stands out as the only European car in the highly competitive family sedan segment. It also brings with it a unique European aesthetic that is noticeably different from other family sedans. From its clean Eurocentric exterior styling and business-like interior to its solid and controlled ride and handling, the Passat serves as a Teutonic alternative to the usual midsize family sedan choices. The Passat also stands out as one of the precious few vehicles in its class to feature a turbocharged diesel engine option in the form of the Passat TDI.

The 2014 Passat has seen its fair share of changes, the most notable being the addition of a new trim level as well as a change in the engine lineup.

The Sport is the newest of the five trim levels. Based on the SE, the Sport receives unique 10-spoke 19-inch alloy wheels as well as a rear spoiler, fog lamps and a variety of other special exterior styling cues. Inside, the Sport benefits from steering wheel-mounted manual shift paddles for automatic-equipped models. The Sport also gets its fair share of unique interior styling touches, including faux carbon fiber interior trim, two-tone leather-trimmed seating and aluminum pedal caps.

Volkswagen’s numerous engine choices for the new Passat include a new 1.8 L turbocharged 4-cylinder engine. Rated at 170 HP and 184 lb-ft of torque, the new mill currently lives under the hood of the Passat Sport. However, the 1.8T is slated to eventually replace the long-running 2.5-liter five-cylinder engine, also rated at 170 horsepower but with seven fewer pound-feet of torque. In the Passat Sport, the 1.8T features a standard six-speed automatic transmission or an optional five-speed manual transmission.

Reasons you may not want to buy a 2014 Volkswagen Passat

The 2014 Volkswagen Passat definitely holds its own as a viable alternative to the average midsize family sedan. Its superb combination of European exterior styling, high-quality interior accommodations, a long list of standard and optional features as well as a strong powertrain selection and excellent safety record makes it the car of choice for savvy buyers wanting to shop outside of the “Camcord” box.