2017 Volkswagen CC Pros vs Cons. Should You Buy? 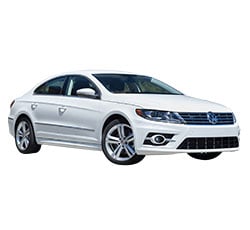 Should You Buy a 2017 Volkswagen CC? Here Are Some Reasons For and Against

A feature-packed interior and remarkably sleek styling help the 2017 Volkswagen CC to remain a factor in the midsize sedan segment. Strong fuel economy makes it even more appealing. Although the CC is not a top-seller, it does deserve some serious consideration.

This year, Volkswagen decided to reduce the number of available trim packages. To make the top-of-the-line model more appealing, it has been equipped with an additional number of advanced safety technologies.

The 2017 Volkswagen CC is powered by a turbocharged four-cylinder engine. VW’s popular engine churns out a respectable 200 horsepower and 207 pound-feet of torque. Few drivers will complain about the car’s overall performance. In terms of acceleration, the CC has no trouble keeping up with many of today’s V6-powered sedans. It recorded a rather brisk 0-60 time of 6.5 seconds.

Fortunately, the Volkswagen CC is not a gas guzzler. It is rated to return an economical 22 mpg in town and 31 mpg on the highway. When tested in real-world driving conditions, the CC actually returned better fuel economy than its advertised EPA rating. However, keep in mind that Volkswagen does recommend the use of premium fuel.

You will grow to appreciate the Volkswagen CC’s responsive driving dynamics. Although it is not the sportiest sedan in the class, it will inspire drivers with a great deal of confidence. The car’s electric steering system feels precise and crisp. If you need to merge onto the freeway, the Volkswagen CC will quickly leap ahead of the pack.

While the CC is a four-door sedan, it has the sleekness of a coupe. If you hate to blend in with the crowd, the 2017 Volkswagen CC could prove to be a perfect match. A low-slung roof makes the sedan look quite sporty. Bi-xenon headlights come standard. Outfitted with 18-inch alloy wheels, the R-Line Executive model has an especially powerful stance.

While behind the wheel of the new CC, you will appreciate the cabin’s simple controls. Adjusting the climate control system is a piece of cake. Steering-wheel-mounted controls enable you to quickly adjust the stereo system. In contrast to some modern sedans, the Volkswagen CC has analog gauges that are very easy to read.

A lot of buyers will likely choose the base 2017 Volkswagen CC. It offers the same level of performance as the R-Line Executive Model. VW’s signature V-Tex leatherette upholstery also helps give the interior a high-quality appearance. Some of the standard equipment includes smartphone integration, touch-screen navigation, and heated front seats. Prices for the base Sport model start at around $34,500.

Last year, Volkswagen decided to update its Discover Media infotainment system. It now benefits from an improved display screen, which makes it easier for drivers to locate their favorite apps. If you are a smartphone user, you can take full advantage of the system’s Apple CarPlay and Android Auto functions. Meanwhile, voice-controlled navigation helps drivers to remain focused on the road.

In comparison to the base Sport model, the upscale R-Line Executive comes loaded with a greater number of safety innovations. In the event that you fail to respond to a stopped vehicle, the sedan’s automatic braking system can take control. On the other hand, adaptive cruise control helps you to maintain a safe following distance on the highway. You will also benefit from lane departure warning.

The Volkswagen CC is for the drivers who like being unique. Unlike some of today’s other family sedans, the CC truly stands out on the road. Because the CC does not sell in great numbers, Oolookers are destined to take a second glance.

Reasons Not to Buy a 2017 Volkswagen CC – The Cons

Volkswagen opted to discontinue the AWD version of the CC. This could pose some concern for the drivers who must deal with snowy weather.

Because of the sedan’s sloped room, it suffers from a lack of headroom in the back. Some of your friends will feel a bit congested. Furthermore, it is not a good choice for the drivers who need to haul around older family members. In order to slide into the backseat, passengers may be forced to duck their head.

The Nissan Maxima and the Acura TLX compete against the CC. Some drivers may prefer the Volkswagen CC’s German styling. Simple interior controls give the 2017 Volkswagen CC yet another advantage over these rival sedans.

The 2017 Volkswagen CC is a stylish sedan that will appeal to drivers who march to the tune of their own beat. Although the CC does not stand out in one particular category, it does offer a tempting overall package. An impressive list of safety innovations have been added to the R-Line Executive model. However, the base Sport model comes loaded with enough equipment to satisfy most folks.