2018 Volkswagen Atlas Pros vs Cons. Should You Buy? 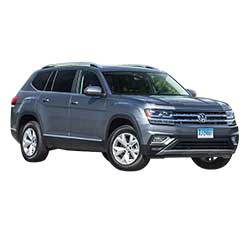 Should You Buy a 2018 Volkswagen Atlas? Here Are Some Reasons For and Against

German car manufacturer Volkswagen is not known for building large vehicles. Sure, most of their lineup is ergonomic and designed to perfection, but they are known for smaller coupes and sedans. Their latest dive into the SUV market with the 2018 Volkswagen Atlas is their largest offering to date. Because of its originality, this vehicle appeals to a large consumer base. There are tons of reasons to choose this SUV as your next purchase, but also some drawbacks to consider as well.

Being that 2018 is the first year the Atlas hits the market, there is nothing to compare it to. In terms of similar SUVs, there are size and feature comparisons that will be alluded to below.

1. Built in America, For America

Although this may strike many readers as odd than a German branded vehicle was designed in America with American consumers in mind, this is no small feat. Volkswagen implemented trends from similar SUVs and created a feature list, price point, and size that call to the country’s driving preferences.

The 2018 Volkswagen Atlas is the largest SUV ever produced by the company. The Atlas is measured at over five meters (or 16 and a half feet) long and two meters (six and a half feet) wide. This makes the truck slightly smaller than the Audi Q7, but still massive for its manufacturer’s track record.

This SUV was carved out in the image of the American muscle car. Its curves are muscular and pronounced and its color schemes are vibrant, particularly the yellow used in its promotional pictures. The wheel arches are equally carved out strong, with squared daytime lights and a proud front grille. To finish off the powerful look, the tail lights are sharp and edged to perfection. In all, the car looks quite different from the bulk of VW’s lineup.

Despite the vehicle’s large size, the 2018 Volkswagen Atlas handles to perfection. Kids can kiss the infamous car sickness goodbye when seated in the backseat of this powerful ride.

While the Digital Cockpit dials are not a new addition to VW’s lineup, appearing in their top-tier Golf packages, they work to perfection on an SUV. It is possible that Volkswagen borrowed the concept from the Audi TT, but imitation is the best form of flattery. On the SEL Premium package of the 2018 Volkswagen Atlas, the analog gauges are replaced with an LCD screen that displays everything a driver could need. This includes information about the current trip and a map display, as well as the current speed and revs necessary for a dash display.

6. The Seating is a Dream

The third row of seating provides perfect leg room for two full-sized adults to sit comfortably. This is not found on many competitors, where it feels that the third row was an afterthought. The second row also slides in both directions, making access to the seats easy and providing leg room when needed. For extra storage space, both rows of seats can also be folded downward. One need not bother on most occasions, as VW equipped the 2018 Volkswagen Atlas with trunk space enough for most hauls.

7. Adequate Fuel Economy For its Class

The 2018 Volkswagen Atlas offers 23 mpg in the four-wheel drive model and 24 mpg in the front-wheel drive option. In the market of heavy operating SUVs, this is a breath of fresh air.

8. Entertainment on the Road

Volkswagen provided an infotainment system that links up with all the major players. This includes functionality with Apple Carplay, Android Auto, and Mirror Link. The 2018 Volkswagen Atlas has the option for a Fender Premium audio system that comes complete with 12 powerful speakers and an equally charged 480-watt amplifier. This is the most advanced stereo system found in a VW vehicle to date.

As Volkswagen is one of the safest vehicle choices on the market, their SUV comes equipped with several driver assistance features. There are forward collision and lane departure warnings, blind spot monitoring, adaptive cruise control, autonomous emergency breaking (AEB), and parking assistance.

The Atlas was in development for a long time. Being that consumers waited years for this car, it is worth checking out as it came as fully featured as expected.

Reasons Not to Buy a 2018 Volkswagen Atlas – The Cons

Despite the digital improvements found on the SEL Premium package, the overall dashboard design is a bit of a letdown. The wood and brush-metal trim seem forced to match American manufacturing standards of comfort. Also, the plastic and fabric layout feels boring when compared to the rest of the vehicle’s design.

2. Underpowered for the Weight

Although the SUV handles well, the six-cylinder engine is a bit on the slow side. One would expect a more powerful engine on such a large SUV. Unfortunate, VW did not keep this in mind. The motor often feels sluggish and unresponsive carrying so much weight.

The design of this car does not meet European standards. In particular, the side crease that runs along the doors feels forced compared to similar vehicles designed in Europe. More laid back drivers might appreciate the minimalist design. Still, the Atlas would certainly strike an odd pose on European roadways.

Although this is a car made for the US market, VW has not included a Diesel engine option for American buyers. The two choices include a 235-brake horsepower 2.0 four-cylinder turbo and a 276bhp 3.6 liter V6 engine. As mentioned, neither are powerful enough considering the size of the SUV.

The 2018 Volkswagen Atlas was designed to compete with American SUV manufacturers like Ford and Chevy. These SUVs are uncommon in Europe due to the large size and tendency to eat a ton of fuel. What VW did here was create a vehicle that sits somewhere between these American options and European counterparts, such as Audi. Smaller and less sleek than Audi’s models, the Atlas is still a formidable competitor.

Being the first vehicle Volkswagen designed solely for America, this car shines in every way possible. It is large, has large storage space, comfortable seating, handles well, offers a ton of safety features, and has a stellar entertainment package. The 2018 Volkswagen Atlas fires on all cylinders and should be considered for those looking for a new SUV.