2018 Volkswagen Beetle Pros vs Cons. Should You Buy? 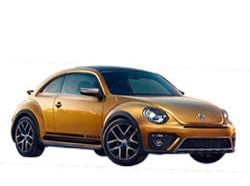 Should You Buy a 2018 Volkswagen Beetle? Here Are Some Reasons For and Against

Known for its iconic styling, the 2018 Volkswagen Beetle remains one of the most unique hatchbacks on the market. It is a great choice for the drivers who are looking for a fun and affordable commuter car. If you want to experience the freedom of riding with the top down, check out the convertible model.

With a starting price of roughly $20,200, the 2018 Volkswagen Beetle is only slightly more expensive than some economy cars. Some of the notable standard equipment includes a touch-screen infotainment system, a backup camera, and VW’s popular V-Tex upholstery. You will also benefit from a 72,000-mile warranty, which can be transferred to the next owner.

For 2018, the Beetle comes equipped with a new turbocharged four-cylinder engine. VW tuned it to develop a fulfilling 174 horsepower. While the Beetle is not a hot rod, it feels quick in everyday driving situations. A six-speed automatic transmission aids the coupe’s responsiveness. When cruising along the freeway, you will be able to easily surpass 30 mpg.

The 2018 Volkswagen Beetle is a lot nimbler than some of the other cars in its price range. You will certainly appreciate the Beetle’s predictable handling. Even when traveling on curvy roads, the Beetle still feels agile. Drivers will also enjoy the Beetle’s soft ride. The standard suspension setup soaks up harsh pavement without ruining the Beetle’s sportiness.

There are a lot of drivers who adore the Beetle’s retro styling. Onlookers will quickly recognize its familiar body shape and round headlights. However, the latest model is a bit sleeker than the previous generation. A rear spoiler accentuates the Beetle’s sporty character. Several exhilarating paint colors are offered, including Tornado Red and Habanero Orange Metallic.

The 2018 Volkswagen Beetle Dune stands out from the rest of the lineup. Although the Dune model is not engineered for off-road adventures, it does have an extremely rugged look. A raised suspension enables it to sit noticeably higher off the ground. It is also a bit wider than the standard Beetle. Unique graphics give the Dune model the finishing touches.

Expect the new Beetle to offer plenty of comfort. It is an ideal choice for the drivers who commute on a daily basis. While there is not much room in the backseat, the front seats are spacious. Adjustable lumbar support helps you to obtain a relaxed driving position. Tall folks will also be thankful for the Beetle’s high roof.

A trendy interior design gives you another reason to like the 2018 Volkswagen Beetle. Colorful panels highlight the cabin's upbeat appearance. Meanwhile, VW's exclusive V-Tex upholstery makes the cabin look quite luxurious. Drivers also applaud the Beetle for its easy-to-use interior controls. Like the climate control system, the touch-screen interface doesn’t require a lot of effort to operate.

There are plenty of drivers who will enjoy the Beetle Convertible. Its retractable roof enables you to experience the wind brushing against your skin. You can also expect the drop-top Beetle to attract plenty of attention on the road. On the inside, customizable ambient lighting gives the Beetle convertible an especially fun mood. Like the regular Beetle, it benefits from a new turbocharged engine.

The Beetle’s standard eight-speaker audio system sounds okay. If you really want to feel the bass, upgrade to the 400-watt Fender audio system. Music lovers will be thoroughly impressed by the unit’s concert-quality sound. You will be able to dial up the volume without hearing any distortion.

When equipped with VW’s optional blind-spot monitor, the 2018 Volkswagen Beetle will make you more aware of potential road hazards. The blind-spot monitoring system instantly detects oncoming traffic in the next lane. Meanwhile, rear cross-traffic alert helps guide you out of tight spots.

Reasons Not to Buy a 2018 Volkswagen Beetle – The Cons

In the past, Volkswagen offered a more performance-oriented Beetle R-Line model. It came equipped with a 210 horsepower engine and a sports-tuned suspension. Unfortunately, the 2018 Volkswagen Beetle can’t be outfitted with any of these performance upgrades. Although the Beetle is rather entertaining to drive, some people may desire just a bit more power.

2. Not Great for Families

The 2018 Volkswagen Beetle is not a great choice for the drivers who need to accommodate their family. Its backseat only provides a minimal amount of legroom. Furthermore, your rear-seat occupants may struggle climbing inside. The four-door Volkswagen Golf will prove to be a more suitable choice.

Don’t expect the new Volkswagen Beetle to provide a wealth of storage room. With only 7.1 cubic feet of available truck space, you will not be able to cram a lot of extra stuff in the back. Most of today’s other hatchbacks provide a far more spacious cargo area.

Some of the key competitors include the 2018 Fiat 500 and the 2018 Mini Cooper. In terms of appearance, some drivers will prefer the Beetle’s bug-like styling. In comparison to the tiny Fiat 500, the Volkswagen Beetle may feel a bit more satisfying to tall drivers. While the Mini Cooper is entertaining to drive, some of its trims are a touch on the expensive side.

The Volkswagen Beetle continues to maintain a loyal fan base. Although it fails to offer advanced driving aids such as automatic emergency braking, this issue is unlikely to turn away most people. With rumors of the Beetle being discontinued in the near future, now is the perfect time to get one.