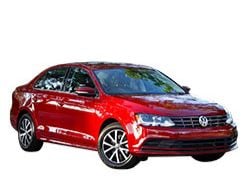 What 2018 Volkswagen Jetta Trim Level Should you Buy? What is the Difference Between Trims?

Timeless and sensible, the Volkswagen Jetta has long been a go-to choice for compact sedan buyers who preferred the practical to the flashy. Wrapping up its sixth generation, the 2018 Volkswagen Jetta remains a very effective vehicle with plenty of features and options.

It is efficient and comfortable, with lots of passenger and cargo room, and offers a good selection of engines ranging from basic to performance. Its main drawback is its older, more conservative styling, but for many that is a part of the car’s draw. In any case, it makes for a sharp contrast with the flashy compacts that dominate the modern sedan scene.

The 2018 Volkswagen Jetta comes in six main varieties, which can seem like much for a compact sedan. However, Volkswagen’s approach to trim levels is a little different than most other manufacturers. Instead of offering a variety of packages for each trim level, each one instead comes with only one or even no options, with larger changes packaged up together in the next trim level. That can make it simpler to select the right Jetta for your needs, but each model does have a few of its own peculiarities.

We’ve put together this summary of the major differences between each Volkswagen Jetta trim level to give you a clear idea of what you get with each trim and option.

Compare the 2018 Jetta S vs Wolfsburg Edition Trims. What is the difference?

Like most Volkswagens, the Jetta starts with the fairly standard S trim level. It uses the smallest of the three turbocharged four-cylinder engines available on the Jetta, displacing 1.4 liters and generating 150 horsepower. A manual transmission comes standard, but can be upgraded to an automatic.

Besides that, the Jetta offers a typical standard selection for a base compact sedan. It has a 5-inch touchscreen infotainment system with Bluetooth and USB ports, has daytime running lights, and rides on 16-inch alloy wheels. Other included basics are air conditioning, power locks and windows, and a rearview camera.

Beyond the choice of six-speed manual and six-speed automatic transmissions, the only other option on the Jetta S is the cold weather package. It adds heated front seats and heated windshield washer nozzles.

The Wolfsburg Edition is a special edition of the Jetta introduced just for this year. The trim offers a nice set of visual and comfort upgrades over the base Jetta S. It comes with fog lights, a more upscale wheel design, and sport bumpers.

It also includes a leatherette interior and the same heated seats and windshield washers as on the optional cold-weather package for the Jetta S. Unlike the S, it includes no optional packages aside from the usual choice between an automatic and manual transmission.

In general, the added features and the low price of the Wolfsburg Edition make it a very desirable upgrade over the base Jetta S, unless you prefer cloth to the synthetic leather used on the Wolfsburg.

Aside from that consideration, the Wolfsburg Edition is a very good value for the money. The main downside to it is that it is somewhat limited in its release compared to the main trim lines, so it might be a bit hard to get a hold of. Otherwise, it is a great value over the base model.

Compare the 2018 Volkswagen Jetta Wolfsburg Edition vs SE Trim Levels. What is the difference?

The next main trim level up from the Wolfsburg Edition, the SE adds mostly technical and convenience features. It comes with the leatherette upholstery and heated seats of the Wolfsburg, as well as a power sunroof, push button start, and a larger infotainment screen with satellite radio support. The upgraded infotainment also adds mobile app support, including Apple CarPlay and Android Auto, adding some extra connectivity options. The SE also adds a blind spot monitoring system with rear cross traffic alert. As with the Wolfsburg Edition, no further options are available beyond the transmission choice.

While the feature set of the SE seems to only be a slight upgrade over the Wolfsburg Edition, the SE usually is the next step up from the base S, which makes for a larger jump in equipment. There is also a fairly low price premium to this model up from the Wolfsburg - less than $1,000.

This does get you a fair bit of desirable features, including a nice safety option and some excellent convenience technologies. While it can get a bit expensive for the more budget-oriented buyers, it is still relatively inexpensive for the features offered compared to the wider compact sedan market, making it a good deal.

Compare the Jetta SE vs 1.8T SE Sport Trims. What is the difference?

The 1.8T SE Sport is a version of the SE trim that is equipped with the more powerful 1.8-liter engine. It gets 170 horsepower, which is 20 more than the base engine, but also gets slightly worse fuel economy. It also has a special body kit and a stiffer suspension for better performance. Outside of being a more performance-oriented version of the SE, it also gets larger 17-inch alloy wheels and a rear spoiler, as well as a swanky black interior design. It comes standard with the automatic transmission.

Another relatively small jump, the 1.8T SE Sport comes in at $2,000 more than the starting price of the SE, but includes the $1,000 automatic transmission option. That is not much to pay for a stronger engine, though if you consider yourself a performance enthusiast you might scoff at the lack of a manual transmission. There are really no reasons to consider this model outside of the engine though, and the weaker mileage may make this an unattractive option for most buyers.

Compare the Jetta 1.8T SE Sport vs 1.8T SEL Trim Levels. What is the difference?

The top trim level of the basic Jetta lineup, the SEL offers the most equipment of any Jetta model. It does not have the body kit, spoiler, or the sport suspension of the 1.8T SE Sport. Instead, it comes with dual-zone automatic climate control, a built-in navigation system, and a collection of active safety equipment that includes forward collision warning with automatic emergency braking and adaptive cruise control. It also adds a power driver’s seat and a Fender sound system. Like most of the other Jettas, there are no available optional packages, and it is also an automatic-only model.

The 1.8T SEL comes with plenty of nice features, but it could have been priced closer to the other Jetta models. At around $3,000 more than the Jetta 1.8T SE Sport and $5,000 more than the starting price of the SE, the 1.8T SEL can be a hard sell for many buyers considering that upgrade, given that it does not add other high-end features common in this price range, such as leather seating. However, it is the only trim with the active safety features, so if those are important to you then the 1.8T SEL is your only choice.

With the strongest of the Jetta turbo engines, the GLI is the performance model for the nameplate, generating 210 horsepower. Like the 1.8T SE Sport, it is focused around performance features and performance buyers. It rides on an even more aggressive sport suspension than the Sport, and also has a sporty exterior and interior design. It has 18-inch alloy wheels, and its leatherette upholstery is punctuated by red contrast stitching.

There are also LED tail lights and specially-designed sport seats, as well as steering wheel mounted paddle shifters. Disappointingly for some, it also only comes with an automatic transmission, and there are no options available.

Coming in at just below $30,000, the Jetta GLI 2.0T is very expensive for what it is. Aside from its fairly strong engine, it has little to recommend it over the much cheaper 1.8T SEL, and is in fact missing many of its key features.

At the price that the GLI commands, there are also plenty of other performance vehicles with more equipment available. Enthusiasts who particularly enjoy the Volkswagen styling and driving feel will enjoy the GLI 2.0T, but everyone else may want to consider another trim level instead.

The 2018 Volkswagen Jetta offers an excellent value among its lower trim levels thanks to the many different varieties in which it is available, the solid equipment that they add, and the low point at which these models are priced. This makes them attractive choices for both budget compact sedan buyers and those looking to maximize the value of their purchase.

The SE trim in particular is a great intersection of high-value features and low price. The higher trim levels are less compelling, as the small performance boost of the 1.8T SE Sport feels unimpressive compared to the higher price and mileage penalty, while the 1.8T SEL is too expensive for what it offers compared to the rest of the vehicles.

The GLI offers a fairly specialist choice for fans of performance compact sedans, but choosing it also entails some sacrifices and it is a little expensive for the segment.

Save Money on a 2018 Volkswagen Jetta:
Are you Shopping for a New Vehicle? Find the Best Deals with "Free - No Hassle" Prices Quotes.