2019 Volkswagen Atlas Pros vs Cons. Should You Buy? 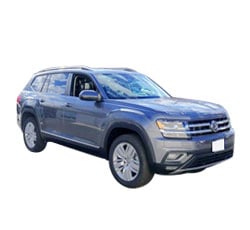 Should You Buy a 2019 Volkswagen Atlas? Here Are Some Reasons For and Against

Although Volkswagen’s first three-row SUV has only been on the market for a short time, it’s already become a hot commodity. Great passenger space and pleasant driving dynamics help make the 2019 Volkswagen Atlas a solid family vehicle. Most importantly, even the least expensive model comes standard with some convenient safety tech. Because the Atlas is so comfortable, it’s an ideal vehicle for traveling the country. Should the Atlas be one of your top picks?

This time around, Volkswagen decided to introduce a couple of new trims. Furthermore, an extra number of safety technologies have been added to the base S model.

1. Base Engine Saves Some Fuel

Although the 2019 Volkswagen Atlas may not be most fuel-efficient SUV in the segment, it isn’t too far behind the class leaders. To obtain the best possible gas mileage, stick with the base turbocharged four-cylinder. The EPA rates it to deliver 22 mpg in town and up to 26 mpg on the highway. You can also stick to using regular unleaded gas. Furthermore, most drivers will be pleased with the base engine’s performance.

Some drivers will desire the V6 engine’s stronger push. A 276-horsepower production gives it an advantage over the base engine. The combination of the V6’s extra muscle and a quick-shifting transmission helps the Atlas to feel more responsive. You can also use the V6’s higher output to tow up to 5,000 pounds. Unlike the four-cylinder Atlas, V6 models can be equipped with all-wheel drive.

Typically, the extra bulk of a seven-passenger vehicle causes diminished handling. That’s not the case with the 2019 Volkswagen Atlas. It actually drives like a much smaller vehicle. Quick and precise steering makes the Atlas very easy to wheel around. Although the Atlas is not extremely athletic, it never feels awkward on the road. You’ll also appreciate how well this large crossover handles dips in the pavement.

4. More Adventurous Than You Think

While the 2019 Volkswagen Atlas isn’t as rugged as a Toyota 4Runner, it’s still more than capable of taking you on a weekend adventure. Volkswagen's 4Motion AWD system does a good job of keeping the tires from spinning on slippery ground. Along with the AWD system comes four driving modes: rough, snow, rain, and dry. The crossover’s 8.0-inch ground clearance also comes in handy. Very few rivals have a better approach angle for tackling challenging landscapes.

Even in its most basic form, the 2019 Volkswagen Atlas is a handsome SUV. However, a lot of people will have their eyes on the all-new R-Line model. It’s easily the sportiest-looking trim in the lineup. Volkswagen equipped it with an exclusive set of 20-inch alloy wheels and special bumpers. You’ll also notice the R-Line’s unique side skirts. Special R-Line badges further distinguish the Atlas R-Line from the other trims.

6. Plenty of Space to Go Around

Families will love lounging around inside of the 2019 Volkswagen Atlas. It’s among the most spacious three-row crossovers on the market. In contrast to some of its competitors, the Atlas doesn’t penalize your passengers by forcing them to sit in a tight third row. All of this SUV’s seats are spacious enough for adults. A sliding second-row seat also makes it easy for folks to step inside. There’s also slightly more than 20 cubic feet of cargo space in the back.

With an MSRP of $31,890, the base Atlas S proves to be a good deal. It’s stylish, comfy, and loaded with some nice technologies. Featuring Apple CarPlay and Android Auto, VW’s Car-Net App-Connect makes it easy to link your smartphone. Some of the other standard features include LED headlights, dual-zone climate control, and Bluetooth. You’ll also enjoy VW’s excellent bumper-to-bumper warranty. You’ll be protected for 70,000 miles.

Unlike last year’s model, the 2019 Volkswagen Atlas comes standard with some beneficial driving aids. This is one of the reasons why the base Atlas has become such a splendid value. While automatic emergency braking anticipates forward collisions, blind-spot monitoring with rear cross-traffic alert directs your attention to unseen vehicles. Active lane control is found on the upper trim levels. An NHTSA five-star overall safety rating also highlights the SUV’s impressive impact protection.

While the standard gauges get the job done, you’ll find the Digital Cockpit to be especially rewarding. This fully digital gauge cluster can be easily personalized by using the steering wheel buttons. Drivers will have quick access to important data such as driver assistance settings, fuel economy, and call history. When traveling, the Digital Cockpit can display turn-by-turn navigation directions.

Volkswagen’s latest infotainment system works great. While a 6.5-inch screen comes standard, the larger 8.0-inch screen is even better. Users praise the interface for its prompt response and sharp graphics. Over time, the infotainment system will become especially easy to use. Units equipped with navigation benefit from a pinch-to-zoom function, which helps you to locate points of interest.

Reasons Not to Buy a 2019 Volkswagen Atlas – The Cons

If you plan to do a lot of towing, the V6 engine’s enhanced power will come handy. However, you will have to give up some fuel economy. This is especially true when driving in the city. It’s rated by the federal government to deliver a combined 20 mpg. By comparison, the four-cylinder Atlas will return a combined 24 mpg.

2. Less Performance than Some Competitors

Most three-row crossovers are focused more on comfort opposed to performance. Nevertheless, the 2019 Volkswagen Atlas isn’t as quick as some of its competitors. With a 0-60 time of around 8.0 seconds, it’s a step slower than the 2019 Honda Pilot and the 2019 Toyota Highlander. During real-world conditions, most drivers won’t notice a big difference in performance.

The available voice controls deliver a so-so performance. Don’t be surprised if the system doesn’t recognize your verbal command. According to some reviewers, even adjusting the stereo system proved to be a difficult task.

4. All-Wheel Drive Adds to the Cost

Drivers living in certain parts of the country will need the available 4Motion AWD system. Unfortunately, it adds to the SUV's total cost. For instance, the AWD version of the base S model demands more than $34,000. Some buyers will hate spending the extra money.

If you don’t have a big family, you may find the smaller Volkswagen Tiguan to be a better choice. A compact design makes it a bit easier to parking in urban areas. Parallel parking is definitely easier in the Volkswagen Tiguan.

The Honda Pilot is one of the best-selling SUVs in the segment. Both the 2019 Honda Pilot and the 2019 Volkswagen Atlas provide a lot of passenger room. However, the Atlas is just a touch better at conquering off-road trails. You will also benefit from Volkswagen’s 70,000-mile bumper-to-bumper warranty, which exceeds Honda’s 36,000-mile coverage.

You may also be considering the Audi Q7. While the Q7 is far more expensive, it does treat you and your family a more luxurious ride. You will also experience the Q7’s quicker acceleration. On the downside, the Audi Q7’s third row feels cramped.

If you’re seeking a sportier three-row crossover, check out the 2019 Mazda CX-9. Not only does the CX-9 handle better than the 2019 Volkswagen Atlas, but it also delivers better fuel economy on the highway. However, you’ll find the Mazda CX-9 to be a less suitable SUV for traveling off-road. There’s also not as much cargo space inside the CX-9.

Before you settle on a new three-row SUV, don’t forget to sample the 2019 Volkswagen Atlas. It ranks among the most spacious three-row crossovers in the country. An optional 4Motion AWD system helps when facing the aftermath of a snowstorm. While enough features come standard, a premium sound system and VW’s Digital Cockpit are found on the upper trims. While the Atlas doesn't have many weak points, it could use a bit more muscle under the hood.