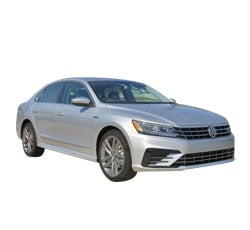 What 2019 Volkswagen Passat Trim Level Should you Buy? What is the Difference Between Trims?

The 2019 Volkswagen Passat marks the end of an era. Since a redesign should be coming for the 2020 line-up, Volkswagen has trimmed the trim levels down to just two this year: the Wolfsburg Edition and the SE R-Line. This is a pretty drastic cutback from last year's six-trim line-up. While it leaves the consumer with a lot fewer choices for customization, it does make the decision-making process somewhat easier.

So, what do you need to know about the 2019 Passat, other than the fact that it only has two trim levels? Well, the biggest thing you should be aware of on both trim levels is that the driving performance feels a bit too lackluster for most drivers to really enjoy. The brutally sluggish transmission is a major culprit in this dulled-down performance. The only other serious downside is that the touchscreen monitors are comparatively smaller than the ones you will find in the Passat's competitors.

Ready for the good news? The Passat's two trim levels are both reasonably priced. You also get some quick acceleration from the 4-cylinder turbo engine and a spacious and cozy cabin to sit in. There is plenty of room for cargo in the trunk as well.

Of course, the one thing that will attract a lot of buyers is the long list of standard features on the base trim. Since four trim levels got the ax this model year, Volkswagen had room to play around with maneuvering features. The base Wolfsburg Edition trim actually got quite a few of these features slapped onto it, making this base trim quite the deal.

You might be thinking that, with only two trim levels available, the task of choosing between them will be super easy. But it is not, especially since so many things were added, subtracted, and re-arranged from the 2018 Passat line-up. That's why we need to go more in-depth with the Wolfsburg Edition and the SE R-Line. Which of these two trim levels will best fit your needs?

Read on through to the end of this review. By the end of it, you should have a clearer idea as to which 2019 Volkswagen Passat trim level is the right one for you.

Compare the 2019 Volkswagen Passat Wolfsburg Edition vs SE R-Line Trim Levels. What is the difference?

While a lot of changes were made in terms of deleting trim levels, the 2019 Volkswagen Passat's two remaining trim levels are pretty similar to the ones from 2018. Granted, they both get some new standard features. However, their mechanical and design aspects are pretty comparable to their counterparts from the previous model year. So, for this model year, it is essential that potential buyers spend a good amount of time comparing and contrasting the two trim levels left standing in the line-up.

First, we have the Wolfsburg Edition. Yeah, its name sounds pretty cool, but there is more to this sedan than just a neat trim level name. The Wolfsburg is the base trim, but it does not have anything terribly basic about it. This vehicle receives its power from a turbocharged 2.0-L TSI in-line 4-cylinder engine with direct fuel injection and an intercooler. This engine is able to generate 174 hp and 184 lb-ft of torque. The powertrain is rounded out by a standard 6-speed automatic transmission complete with Sport mode and Tiptronic. It rides atop 17-inch 10-spoke alloy wheels and has a coming/leaving home feature. Automatic headlights and heated side mirrors come standard. If you so wish, you can opt for the Sunroof and Wheels Package, which includes a power tilting and sliding sunroof.

The interior of the Wolfsburg Edition trim is surprisingly luxurious for being a base. While many of its competitors come with cloth interior, the Wolfsburg Edition is decked out in chic V-Tex leatherette upholstery, which lends to an air of elegance for the cabin. Also, the steering wheel and gear shift knob are wrapped in leather trim. The comfort seats are packed with support, and the driver seat is power adjustable 8 different ways. Also, the front seats are heated, which feels great when you have to ride around in those cooler winter months.

In addition to a manual air conditioning system, the Wolfsburg Edition's list of convenience features includes keyless vehicle entry with a push button start feature. Also, there is a premium color multi-function display screen that keeps the driver up-to-speed on what (and how) the Passat is doing.

Of course, one thing on every new vehicle buyer's mind is the list of standard infotainment features. Well, these are things that the base Wolfsburg Edition has in droves. This trim level comes stocked with a rear view camera system for monitoring what is happening behind the vehicle while it is on the road. In addition to this, you also get a 6.3-inch Composition Media touchscreen display with a system that includes an AM/FM radio, HD radio, a CD player that is compatible with MP3/WMA/FLAC files, an SD card reader, and a proximity sensor. There is one USB data port up front and two USB charging ports located in the rear of the vehicle. Bluetooth connectivity comes standard, as does the Volkswagen Car-Net App-Connect system. A three-month trial subscription to SiriusXM All Access also comes with the Wolfsburg Edition. In addition to the rear view camera, there is a blind spot monitoring system with a rear cross traffic alert that enhances the Passat's safety while on the road.

For a few thousand dollars more than the starting MSRP of the Wolfsburg Edition, you can get the line-topping SE R-Line trim level. The SE R-Line trim equips the same 2.0-L 4-cylinder engine and 6-speed automatic transmission as the Wolfsburg Edition, so you can expect to get the same power output and fuel efficiency from the SE R-Line. There are, however, quite a few differences that are worthy of being mentioned.

On the outside, the SE R-Line features a hands-free easy open trunk, powered side mirrors, and the power sliding and tilting sunroof that comes as an option on the Wolfsburg Edition. Also, the SE R-Line is equipped with rain-sensing windshield wipers and a park distance control function. All of the exterior lights (the headlights, taillights, and daytime running lights) get upgraded to LED, and the headlights are automatic on-off. Another major difference is that the SE R-Line gets 19-inch twin 5-spoke alloy wheels slapped on.

The cabin of the SE R-Line is a bit different from the Wolfsburg Edition trim as well. The SE R-Line is still adorned in the V-Tex leatherette upholstery found on the base trim, and the driver seat is also power adjustable eight ways. However, Volkswagen really boosts the number of convenience features available. For example, adaptive cruise control (ACC), a dual-zone automatic climate control system, ambient interior lighting, and an automatically dimming rear view mirror come standard inside of the SE R-Line trim.

Infotainment features also get upgraded on the SE R-Line trim. While you do get everything that comes on the lower trim level, this trim just so happens to add on a 6-month trial subscription to Volkswagen Car-Net Security & Service, a premium audio system designed by Fender, and the Volkswagen Car-Net Guide & Inform feature with three-month trial subscriptions to SiriusXM Traffic and SiriusXM Travel Link. Lane keep assist and a forward collision warning with autonomous emergency braking also come standard on the SE R-Line. Other than that, however, you can expect to find the same active and passive safety features on the SE R-Line that you get in the Wolfsburg Edition.

As you can see, the narrowing down from six trims to just two for the 2019 model year gave Volkswagen a lot of leeway in beefing up the Wolfsburg Edition and SE R-Line trim levels. Honestly, in this case, less is more, especially since consumers are now looking more toward larger vehicles (like crossovers, SUVs, and trucks) for their beloved daily drivers.

The 2019 Volkswagen Passat is a good choice for a vehicle if you don't mind a slightly boring performance from the powertrain. Both trim levels have the same mechanical aspects, so the decision for which trim level to get really boils down to which standard features you feel you must have.

In all truth, the base Wolfsburg Edition is going to give you the best overall deal. For the price, you get a lot of features - more than what you might find on other base trims. And with standard leatherette, how can you possibly pass on it?

Save Money on a 2019 Volkswagen Passat:
Are you Shopping for a New Vehicle? Find the Best Deals with "Free - No Hassle" Prices Quotes.