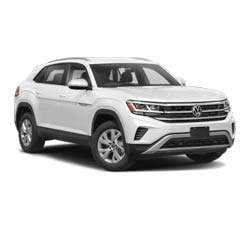 What 2022 Volkswagen Atlas Trim Should You Buy? What is the Difference Between Trims?

Very few markets are currently as crowded as the one for three-row SUVs. That level of competition results in many enticing options for buyers to consider. While some do an admirable job of combining versatility with performance, others sacrifice one for the other.

The 2022 Atlas is the largest member of the Volkswagen family, and it does a nice job of checking all of the boxes. This SUV decided to get rid of its previous base model this year, reducing the number of options to five. On the plus side, they added some extra standard features to many of the remaining trim levels. Overall, the Atlas is an SUV that does a lot of stuff right, and one that will appeal to many families. And if buyers do not need seating for six or seven, they can also check out the two-row Atlas Cross Sport.

Of the five remaining trim levels for the 2022 Atlas, which is the right one to choose? That depends on how much a buyer is willing to spend, as well as what features they really need. With a difference of nearly $18,000 between the lowest and highest trim, it is important for drivers to do their research before making their purchase.

In the following guide, the differences between the five 2022 Atlas trim levels are detailed to make the decision easier.

Compare the SE vs SE with Technology. What is the difference?

The 2022 Atlas SE is only available with a turbocharged 2.0L four-cylinder engine that creates 235-horsepower and 258 lb-ft of torque. Paired with the engine is an eight-speed automatic transmission that is applauded by critics for its ability to shift smoothly and responsively. Front-wheel drive is standard, but even the base SE can upgrade to all-wheel drive.

Underneath the SE are 18-inch alloy wheels. On the top of this model, buyers will find black roof rails. LED headlights with daytime running lights and LED taillights come standard, along with power-adjustable and heated side mirrors.

Inside the cabin, the SE greets buyers with a 10-way power-adjustable driver's seat. The dual-zone automatic climate control system comes with vents in all three rows. There are heated front seats and an auto-dimming rearview mirror, which adds to the upscale feel of all 2022 Atlas models. Synthetic leather upholstery and LED interior lights further add to the appeal. The base model of the Atlas comes with seating for up to seven.

There are several technology features for the Atlas SE, including a 6.5-inch touchscreen and a Wi-Fi hotspot. Android Auto and Apple CarPlay come standard as well. The Volkswagen digital cockpit also is found on the dashboard, further adding to the sophistication and high-tech nature of the Atlas.

The list of standard driver aids is relatively short but it includes several of the most popular features. The SE has blind-spot monitoring, forward-collision mitigation with pedestrian detection, and rear cross-traffic alert. There are no available packages for this entry-level model.

When it comes to the SE with Technology, there are a lot of upgrades to be aware of. The same engine remains standard, but this model can also swap it out for a 3.6L V6 that creates 276-horsepower along with 266 lb-ft of torque. If buyers go for this engine, they can then choose to add a towing package that gives the SUV the ability to tow up to 5,000 pounds. Without the towing package, the Atlas can tow up to 2,000 pounds, regardless of the engine choice.

The eight-speed automatic transmission remains standard with the V6. A remote start is added here, and the Atlas SE with Technology sits on 20-inch wheels rather than 18-inch ones. If ride quality is the top priority, buyers will want to stick with the entry-level SE and its smaller wheels.

One of the most appreciated additions here is likely the hands-free power liftgate with remote opening and closing. The SE with Technology can also have a sunroof, although it is not standard yet. For keeping everyone comfortable, this trim gets tri-zone automatic climate control. This allows for different temperature settings for the driver, front passenger, and second-row.

A 115-volt power outlet is added to the cabin of this Atlas model. Both Android Auto and Apple CarPlay become wireless here, further adding to the convenience offered by the SE with Technology trim level. For controlling all of these tech features, buyers now get an 8-inch touchscreen and voice commands. The entry-level SE has only two USB-C ports located in the front row. For the SE with Technology, the Atlas adds one center USB-C charging port and two rear USB-C charging ports.

That is not the end of the technology upgrades. This trim level also adds a wireless charging pad, along with both satellite and HD radio. It also uses tech to keep drivers safer, with features like adaptive cruise control, which maintains both speed and distance behind the following vehicle. Both front and rear parking sensors are also standard for the Atlas SE with Technology.

Compare the SE with Technology vs SEL Trims. What is the difference?

The SEL is the first trim on the 2022 Atlas list to be automatically equipped with all-wheel drive. It still comes standard with the turbocharged four-cylinder. If buyers decide to go with the V6 engine, however, the SEL automatically gives them the towing package and capability to tow up to 5,000 pounds.

There are several exciting exterior features for the SEL model as well. It has heated windshield wiper nozzles, for example. This model also has what Volkswagen calls LED "performance headlights." The sunroof is standard for the Atlas SEL and higher. Silver roof rails are on top of this model, rather than the black ones on the lower trims.

The driver's side mirror and seat both get memory settings to make the Atlas easier to share with another driver. Ambient interior lighting is another cabin upgrade found here. The front passenger seat also gets power adjustment, and there is even a heated steering wheel to enjoy on chillier mornings. For the infotainment system, navigation is added. This trim level is the first to offer second-row captain's chairs, reducing the seating capacity to six. This remains an option for the remaining models.

Driver assistance features are added for this midlevel trim as well, helping it to justify its dramatic jump in price.. It comes with blind-spot intervention, which will steer the Atlas back into its lane if the driver tries to move over when there is a vehicle in the way. This trim level also has adaptive headlights, which swivel with the steering wheel, and a lane keeping system, which will make corrections to the steering in order to keep the Atlas centered in its lane.

Compare the SEL vs SEL R-Line. What is the difference?

The R-Line is the first 2022 Atlas that has the V6 engine underneath the hood. All-wheel drive is standard still. This model also has 20-inch wheels, although they have a unique dark graphite alloy wheels that are exclusive to this trim. The R-Line also has unique badging and bumpers that make the Atlas appear more athletic.

Otherwise, the SEL R-Line has the same features as the SEL. It costs just over $3,000 more to go with the R-Line version instead of the four-cylinder SEL. That means that the R-Line costs a little over $1,000 more than the SEL with the V6, so buyers will want to make sure they really love the cosmetic upgrades found here.

Compare the SEL R-Line vs SEL Premium R-Line. What is the difference?

The very top trim level of the 2022 Volkswagen Atlas is called the SEL Premium R-Line. It goes with 21-inch two-toned machined alloy wheels. While attractive, these large wheels do take away from the ride quality of the Atlas. For the side mirrors, this ultra-luxurious model gets a power-folding feature.

While all 2022 Atlas models have heated front seats, the SEL Premium R-Line is the only option to have heated second-row outboard seats as well. The front seats also get an upgrade by adding ventilation to help those up front stay cool on a hot day. Both the first and second rows also get genuine leather seating surfaces.

The cabin of the SEL Premium R-Line is home to a 12-speaker Fender premium sound system. This model also has a 360-degree camera system, which will give drivers a top-down view of the Atlas while parking. If drivers want even more help, this trim also comes with an automated parking system. It can steer into a space without any intervention from the driver.

All models of the 2022 Volkswagen Atlas are relatively well-equipped for their price. The SE is not lacking in any way, making it a respectable choice for many drivers. For just over $4,000 more, however, buyers can step up to the SE with Technology. Not only does this add a decent number of standard features, but it also adds several options, including the more powerful engine.

The SE with Technology has things like a remote start, an 8-inch touchscreen, and wireless device charging. Upgrading to the V6 engine costs just $1,750, adding capability to the Atlas without driving the price up too much. Buyers can also opt for second-row captain's chairs, making it easier to access the third-row.

Going with the SEL is also an option. It brings with it all-wheel drive, adaptive headlights, a heated steering wheel, and many other luxuries that may be tempting to some buyers. At the same time, it adds nearly $6,000 to the price tag, something that will make it hard to justify for most. The SEL R-Line and Premium R-Line mostly give the Atlas unnecessary features that buyers will likely be reluctant to pay extra for.

Buyers should choose the 2022 Volkswagen Atlas SE with Technology in order to get the most for their money.