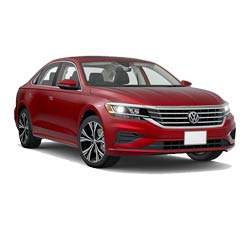 What 2022 Volkswagen Passat Trim Should You Buy? What is the Difference Between Trims?

A midsize sedan is a vehicle that can wear a lot of hats. It can make an efficient daily commuter, and at the same time work well for smaller families. Still, this segment on the market has been in decline for some time.

For that reason, it is no great surprise that the 2022 Volkswagen Passat will be the final year for this model. It is currently in its fourth generation, which debuted all the way back in 2012. In its final year, the Passat has eliminated the S trim level that previously came standard. Instead, buyers can now opt for a Limited Edition model that helps to commemorate the end of a long and successful run.

Just because it will not be around much longer does not mean that the Passat is not a good car. There are three well-equipped models to choose from this year. All of them have lengthy standard features lists, as well as a cabin that has plenty of space for passengers. The ride is also comfortable on all three trim levels, something that further adds to the overall appeal of the 2022 Passat. At the same time, this Volkswagen has one of the highest starting prices for in the midsize sedan market, something that may have buyers skipping it altogether.

If one has their heart set on the Passat, then discovering the differences between the three trim levels is the best way to decide which one to buy. The following guide is designed to help with that very goal.

Compare the SE vs. R-Line Trims. What is the difference?

No matter which of the three trim levels buyers choose, their 2022 Passat will have a turbocharged 2.0L four-cylinder engine underneath the hood. This allows the midsize sedan to create 174-horsepower and 206 lb-ft of torque. A six-speed automatic transmission gets the job done, although it does not feel as refined as some of the rivals of the Passat. Overall, the amount of power combined with the precise steering makes this sedan enjoyable to drive. The ride also manages to be both sporty and comfortable, something that many vehicles struggle with.

What drivers may not enjoy as much is stopping at the gas station. The Passat SE is only estimated to get 24mpg in the city and 36mpg on the highway, which is on the lower side for the class. This sedan is only available with front-wheel drive in 2022, meaning these estimates stay consistent across the board.

The SE trim level has 18-inch two-tone alloy wheels. There are LED projector headlights along with LED daytime running lights. These headlights have an automatic on and off feature for added convenience. LED taillights help to make an impression as the Passat pulls away. Other nice touches for the exterior of the SE trim include a power sunroof and heated side mirrors with a memory feature. Rain-sensing windshield wipers, also standard, come in handy when the weather takes a sudden turn.

There are five exterior colors available for the 2022 Passat SE. Buyers can choose from Deep Black Pearl, Pure White, Aurora Red Metallic, Platinum Gray Metallic, and Tourmaline Blue Metallic. There are also three interior color schemes to choose from here as well. Titan Black, Mauro Brown, and Shetland Beige are all sophisticated options to consider for the Passat's cabin.

Inside the SE is an eight-way power-adjustable driver's seat that includes power lumbar support. The front seats are heated and dual-zone automatic climate control is included as well. An auto-dimming rearview mirror is more proof that even the entry-level Passat leans toward luxury. The shift knob and steering wheel are leather-wrapped as well.

The Passat SE is a convenient sedan choice, thanks to standard features such as remote start. Proximity keyless entry is also standard, plus a push-button start. With 15.9 cubic feet in the trunk, the Passat is considered to have better-than-average cargo space for its class. All models have a 60/40 split-folding rear seat to allow for hauling longer objects.

Technology features are not quite as impressive when considering the Passat SE, however. This is largely due to the 6.3-inch touchscreen that comes standard. Buyers do get Android Auto and Apple CarPlay, along with Bluetooth. Another bright spot is the stereo system, which includes six speakers, plus HD and satellite radio. There are a total of three USB ports. Two of them are charging-only and are located in the backseat.

Nearly every 2022 Passat driver aid is included on the base SE model. This sedan comes equipped with a forward collision warning along with forward automatic emergency braking. It also includes pedestrian detection to help keep everyone safer when the Passat SE is on the road. Lane-keep assist, which works to keep the Passat centered when there are detectable lane markings, is also standard.

Blind-spot monitoring and rear cross-traffic alert are also included and can help by acting as an extra set of eyes when changing lanes or backing out of a parking space. Naturally, all models of the 2022 Passat are also equipped with a rearview camera. There are also several safety features that are not considered quite as advanced that come standard for this sedan, including hydraulic brake assist, engine brake assist, and electronic brake pressure distribution. A tire pressure monitoring system is thrown in as well.

Volkswagen Car-Net also comes standard on the 2022 Passat SE. This includes a variety of remote features that drivers can utilize. If a parent wants to let their teenager drive the Passat, for example, they can set speed alerts. Car-Net will then alert them if the vehicle exceeds that speed. This feature will also alert drivers if they need to schedule maintenance or repairs for their Passat. It can even help them find a place to park. Buyers can also add Safe & Secure, a subscription that includes things like automatic crash notifications, stolen vehicle location assistance, and emergency assistance.

The next option on the Passat trim list is called the R-Line. This is the name that Volkswagen gives to all of its vehicles that are meant to look and feel a little more athletic. For the Passat, the R-Line sits on 19-inch wheels. It also gets a black spoiler and specialized badging. The R-Line is home to a unique bumper design meant to make it appear more aggressive.

Inside, the sporty nature of the Passat R-Line is showcased with paddle shifters on the steering wheel. This is also the first option to come standard with ambient interior lighting. There are also R-Line door sill protectors, which look nice and help to keep the cabin of the Passat look their best.

Unfortunately, the touchscreen does not get any bigger when going with the R-Line. On the bright side, the infotainment system does gain navigation. The R-Line also gets the very impressive Fender premium audio system. This system creates beautifully clear and crisp sound, enhancing the time spent inside the Passat.

The R-Line gets all of the safety features that are found on the SE. This trim level is also equipped with automatic high beams for even more convenience when driving at night. The R-Line has a starting price that is exactly $2,000 more than the base SE.

Compare the R-Line vs. Limited Edition. What is the difference?

The brand-new Limited Edition version of the Passat adds a few extra layers of luxury to the sedan. There are no mechanical upgrades to be found here, however. Underneath the Passat Limited Edition, buyers will find 18-inch wheels once more. While the SE has five-spoke wheels, however, the Limited Edition has 15-spoke ones instead.

For the side mirrors, the top trim adds a memory feature. This allows drivers to switch to their preferred positioning with the push of a button after someone else has driven the Passat. The rear spoiler is no longer there, but the mirror caps are painted black for an edgier look. Those who go with the Passat Limited Edition will get a hands-free trunk to make it easier to load and unload the vehicle.

Inside, the driver's seat also gains memory. Once again, this aids in sharing the Passat with another person without having to constantly make adjustments to get comfortable at the wheel after they have driven. Buyers will find a special Limited Edition Chattanooga tag on the sport front seats to help make this final trim of the final year more unique. Leather upholstery is standard. While the leather-wrapped steering wheel remains standard, it loses the paddle shifters found in the R-Line model.

The front passenger seat in the 2022 Passat Limited Edition gains eight-way power adjustment. Those sitting in the back gain heated seats as well, further adding to both the luxury and the comfort of the top trim. The Limited Edition has a starting price tag of only $1,000 more than the R-Line.

Many buyers may find themselves drawn to the Limited Edition. It really does not cost that much more than the other models, all things considered, and it represents the chance to own a piece of history. Unfortunately, Volkswagen has announced that they only plan to make 1,973 models of the Limited Edition. That may make it a little trickier to actually bring this trim level home. The significance of this number comes from the fact that the first Volkswagen Passat was produced in 1973 in West Germany.

The R-Line is appealing largely due to its sound system. The added bonuses such as high beam assist and navigation are nice as well, but altogether these features may not be enough to justify paying extra. Buyers should keep in mind the fact that the R-Line just looks faster - it does not actually have any extra horsepower to back that up.

Ultimately, the base SE model is the right version of the 2022 Volkswagen Passat in most cases. It comes with an impressive number of safety, technology, and convenience features for the price. Considering the fact that Passat is already one of the pricier midsize sedans on the market, buyers should probably stop here.

The 2022 Volkswagen Passat SE gives drivers the features that are the most important to daily drives, and it is the most affordable way to bring home a model from the final production year.