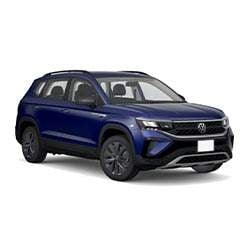 What 2022 Volkswagen Taos Trim Should You Buy? What is the Difference Between Trims?

Volkswagen makes a few different SUVs, with the Taos being the smallest one in the lineup. As a subcompact SUV, the VW Taos has a versatile cabin and an athletic, modern style. This model is brand new for 2022, and it should be attractive to many buyers because of its affordable starting price, modern amenities, and high-tech systems.

This vehicle benefits from having a new VW engine. This engine is a turbocharged 1.5-liter version with four cylinders, and it can make a decent amount of power, with 158 horsepower and 184 pound-feet of torque. Of course, this isn't as much power as what other models in the industry have to offer, but it should be enough to satisfy most of those who are interested in the subcompact crossover/SUV market.

In terms of space, the Taos doesn't have a large footprint, but it does have a good amount of second-row leg room. Its rear-seat passengers can enjoy almost 38 inches of leg room. This amount is similar to what's found in many slightly larger SUVs. Cargo volume when the rear seats are upright is 28 cubic feet, and it can be expanded to about 66 cubic feet by folding those seats down.

Volkswagen makes three trims of the new Taos. The S is the entry-level trim, the SE is the mid-level option, and the SEL is the nicest one available. Between the S and the SEL, there's a price difference of about $8,500, so prospective customers will have to take cost into consideration as they weigh the pros and cons of each trim.

Compare the 2022 Volkswagen Taos S vs SE. What is the difference?

From an exterior perspective, the S is pretty much the same as the SE is, except for a few minor details. It rides on 17-inch alloy wheels, while the SE gets to have 18-inch ones. On the S, there are black roof rails, and on the SE, those are silver instead. Both look modern with LED headlights and LED Daytime Running Lights.

Inside the cabin, the differences are a little more noticeable. One would hope so, since the SE costs about $4,000 more than the S does. First of all, they have different types of upholstery on their seats. Basic cloth seats are found on the S trim, while the SE has CloudTex seating surfaces. CloudTex can be compared to leatherette or a synthetic leather material. It looks and feels almost as nice as genuine leather, and it's durable and easy to clean.

The one place where leather is found on the SE is the gearshift knob. Having a leather gear shifter is optional on the S, but not standard. The SE's steering wheel is wrapped in leatherette, too, and both trims come with the option to get a heated steering wheel to help combat the cold in the winter.

In the S, the front seats are fairly standard, as in they don't have heating elements and are manually adjustable. In the SE, the driver's seat is power adjustable. It can move in eight ways and has power lumbar support. Plus, the two front seats are heated, which many customers appreciate. Both trims are limited to having manual air conditioning systems.

Volkswagen has made sure that the Taos can appeal to modern consumers who are used to doing almost everything with their smartphones. Both trims have voice control and App-Connect, with the SE also coming with wireless charging. Bluetooth is standard. The S features a 6.5-inch touchscreen and two USB-C data ports in the front. This infotainment package is upgraded in the SE, as it has SiriusXM with 360L, three total USB-C ports (including one that's in the back seat), and an eight-inch touchscreen.

With the SE, getting into the cabin and getting the engine started is a simple process. That's because it has keyless access with push-button start. It even has remote start so that the engine can get going and the heater or air conditioner can start working before people get into the cabin. On the S, there is push-button start but none of the other features just mentioned.

One of the things that people will like about the Taos is the Volkswagen Digital Cockpit. Standard on this SUV, it's a high-resolution display that's located behind the steering wheel where one would traditionally find the odometer and various gauges. It takes the place of those gauges and makes things easier to read. Various types of data can be accessed through this display, which is fully customizable.

Safety is obviously an important factor when buying a new vehicle. Given how prevalent driver-assist technologies are in new models, it makes sense that many customers would be specifically looking for these types of advanced systems. When a vehicle can actually be monitoring the situation and can alert drivers to potential issues, many types of accidents can be prevented. Even better is when a vehicle can correct steering or braking.

Unfortunately, the S doesn't have an advanced safety technologies. A customer would have to get the SE trim in order to be able to rely on those features. Standard on the SE are pedestrian monitoring, forward collision warning, automatic emergency braking, blind spot monitoring, and rear traffic alert. These systems can be effective in keeping drivers more aware of what's around them.

Now, the S trim can be upgraded with the Convenient Package. This package would give it a heated steering wheel, leather-wrapped gear shifter, and the safety components listed in the previous package.

The Convenience Package would also give the S automatic high beams, adaptive cruise control, and rain-sensing windshield wipers. Automatic high beams can turn on and off, depending how much light is detected, and adaptive cruise control can slow the vehicle down on a highway if the leading vehicle reduces its speed. These three components are optional on the SE as well, and they're included in the SE's Convenience Package.

Compare the 2022 Volkswagen Taos SE vs SEL. What is the difference?

The S and SE are priced well under $30,000, but the SEL has a cost that's above that mark. It looks more refined than the others in the lineup, as it has 18-inch black alloy wheels and an illuminated grille. Like the SE, it has heated side mirrors. The SEL is the only trim to come standard with rain-sensing windshield wipers, lights that have a low-speed corner-illuminating feature, and adaptive front lighting. With adaptive front lighting, the headlights can turn up to 15 degrees. When taking turns, the lights can turn in the direction that the Taos is headed, and by doing so, they can better illuminate a dark road.

More sophisticated elements are integrated into the SEL's cabin. It has ambient interior lighting and leather seats. The front seats are heated, and the steering wheel is heated, too. Remember that a heated steering wheel is only an option on the SE.

Instead of a manual air conditioning system, the SEL has Climatronic dual-zone automatic climate control. This allows the driver and front passenger to set their own preferred temperatures. Another thing that the SEL has is an auto-dimming rearview mirror. If anyone has ever had bright lights shining right into their rearview mirrors at night, then he/she knows how much a rearview mirror that can automatically dim itself can be appreciated.

Like the SE, the SEL has an eight-inch touchscreen. The difference is that the SEL's system comes standard with navigation. Navigation can be so useful in various situations, whether one is trying to find a new location or is just trying to go to work without getting stuck in traffic. The Digital Cockpit on the SEL is a slightly more advanced version than the one on the SE, as it can show a map and the vehicle's location.

Finally, the SEL has more advanced safety systems than the SEL has. It's the only trim to come with park distance control, which can really come in handy when maneuvering in or out of tight parking spots. In addition, it has automatic high beams, lane assist, travel assist, and emergency assist.

As its name suggests, lane assist can keep the Taos centered in a lane. Travel assist uses various monitors to ensure the VW stays a safe distance from other vehicles. If there's a problem, Travel Assist can make adjustments to speed and/or steering. It works at speeds above 20 miles per hour.

Emergency Assist is a driver attention warning system. If the driver seems to be losing focus, an audio warning will be issued. The next step, if the driver doesn't regain focus and control of the vehicle, would be a brief brake check. Finally, if there is still a concern with the driver, the vehicle can bring itself to a stop and then turn its hazard lights on as another layer of protection.

These driver-assist systems are available on the SEL, as they are on the SE, but they would require an extra fee.

It can be hard to decide which Taos would be best. After all, they're more similar to each other than they are different. As an SUV that's on the smaller side, the Taos is easy to drive and offers the versatility that many customers are interested in. It's also great that Volkswagen decided to put smartphone connectivity and a touchscreen into every trim.

It's hard to ignore that the S doesn't come standard with any driver-assist technologies. These days, it's very common to find affordable vehicles with automatic emergency braking, but unfortunately this is not included in the entry-level trim of this VW. For this reason, it would be a better idea to get the SE than the S. Having more safety components is always a good thing, and it's notable that these programs can play an active role in protecting passengers, rather than just sending out warning signals.

Some other perks that come along with the SE are heated front seats, wireless charging, a larger touchscreen, and SiriusXM.

If anyone wants to have an even more upscale vehicle and has the budget to afford one, then the SEL would be the wisest choice. It has the most comprehensive safety package out of all three Taos trims, and it treats people to high-end features, like navigation, a heated steering wheel, and leather seats.

Just remember that the SEL is priced above $30,000. In fact, it's more than $4,000 more expensive than the SE is. Buyers will have to consider whether navigation and the other components are really necessary.