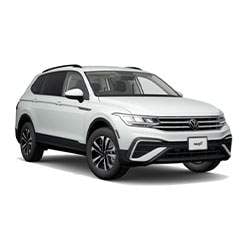 What 2022 Volkswagen Tiguan Trim Should You Buy? What is the Difference Between Trims?

Volkswagen's Tiguan is a mid-size SUV that has something that many competitors don't, which is a third row of seats. This model is the same size as many other two-row SUVs, but somehow Volkswagen has managed to give it an extra row with two seats. This is going to help it stand out in a crowded market.

On top of its appealing interior configuration, the Tiguan has many other nice features. It looks modern and stylish, and it can handle tough conditions fairly well, especially if it gets upgraded with all-wheel drive. Standard components like heated front seats, driver-assist systems, and smartphone compatibility are appreciate by many potential customers.

The Tiguan isn't one of the cheapest SUVs available, nor is it that expensive. It offers a good option for drivers who don't necessarily want something that so many others in the neighborhood seem to have.

Compare the 2022 Volkswagen Tiguan S vs SE Trim Levels. What is the difference?

Like the other trims in Volkswagen's lineup, the S and SE use 2.0-liter turbocharged engines and eight-speed automatic transmissions. Horsepower is 184, and torque is 221 pound-feet. These are decent numbers that should keep most people happy. Some might argue that the company should have gone with a more powerful engine, but this is the only option that customers have for this model year.

The main choice regarding the performance and capability of the SUV is whether to get front-wheel drive or all-wheel drive. VW calls its all-wheel drive system 4MOTION. In regular conditions, a vehicle with 4MOTION would send power to its front wheels to be more efficient. If it seems like a loss of traction might be imminent, power would be redistributed, and it would instead be sent to all four wheels. 4MOTION is continually working and making adjustments in response to what it senses. Fortunately, 4MOTION is available across the lineup.

Many people would pick up on a few exterior differences between the S and SE if the two trims were sitting side by side. The SE benefits from having silver roof rails and 18-inch alloy wheels. The S, on the other hand, has black roof rails that don't stand out as much, and it rides on 17-inch alloy wheels.

Both trims have LED headlights, LED taillights, and LED Daytime Running Lights. In addition, both have side mirrors with heating elements built into them. Heated windshield washer nozzles can be particularly useful when the temperatures drop below freezing. One thing that can't be seen but can certainly be appreciated is the power liftgate on the SE. It can be opened and closed remotely.

If anyone prefers to get a new SUV with a sunroof, the S would have to be ruled out as an option. It's not available with a sunroof, but the SE is. This trim can be upgraded with a panoramic sunroof that can tilt and slide open.

The SE also has rain-sensing windshield wipers. When a lot is going on, it can be helpful to have these types of wipers. They are available on the S, as part of a package.

Moving to the inside of the S and SE, more differences are found. First of all, the S has cloth seats while the SE has V-Tex leatherette seats. For some customers, this is going to be an important factor.

It's great that heated front seats are standard in the Tiguan so that people can stay warm and cozy when it gets cold. The S only has a manual climate control system, while the SE gets to have dual-zone automatic climate control. The controls are touch sensitive, and there are second-row air vents.

A leatherette material is wrapped around the steering wheel on the SE. This type of steering wheel is available on the S for an added cost. Both trims have leather-wrapped gearshift knobs.

When driving at night, bright lights can be distracting. The SE has a rearview mirror that has an auto-dimming function to reduce glare and help drivers stay focused on the road ahead. This type of mirror is available on the S, but it isn't standard at that level.

Technology is an area in which the SE stands out as being much more well-equipped than the S. The S does have a number of attractive components, such as a digital cockpit, Bluetooth, and a 6.5-inch color touchscreen. Through the company's system called App-Connect, an Apple or Android smartphone can connect with the vehicle's infotainment system.

On the SE, the App-Connect program has wireless capability, and the touchscreen measures eight inches. HD Radio and voice control are included at this level, and so is SiriusXM All Access. Wireless charging is a big perk, especially given the fact that many newer phones are compatible with this type of charging. Plus, the SE has one more charging port than the SE does. In addition to the standard dual front USB ports, the SE comes with a rear charging port.

Another way in which technology improves the experience of having a Tiguan SE is through the remote start function. From the comfort of a home, office, or anywhere else someone may be, all it takes is the push of a button to start up the car and get the cold or hot air moving through the vents.

Finally, any comparison between these trims has to include a discussion on safety. Both come standard with a set of advanced components, including front assist and side assist. If anyone isn't familiar with front assist, it's what the company calls forward collision warning with emergency braking and pedestrian monitoring. Side assist equates to blind spot monitoring.

The SE has lane assist as a standard element, but this system is only optional on the S. It's a program that alerts drivers when they're drifting out of their lanes, and it allows the Tiguan to gently correct steering if necessary. Also available on the S and standard on the SE are adaptive cruise control and emergency assist. With emergency assist, the Tiguan will know that something's not right when it doesn't detect any steering, braking, or acceleration from the driver. It will prompt the driver to take action, and if nothing happens, like if the driver has fallen asleep or experienced a medical emergency, the SUV can bring itself to a stop.

Compare the 2022 Volkswagen Tiguan SE vs SE R-Line Black. What is the difference?

Most of the things that set the SE R-Line Black apart from the SE have to do with style. The R-Line Black has a more aggressive feel than the regular SE trim has. 19-inch wheels and black roof rails help with this.

Similar to other R-Line models in Volkswagen's inventory, the Tiguan SE R-Line Black has special bumpers and badging. It has black exterior accents in several places, including around the grille and on the side sills.

Inside the cabin of the SE R-Line Black, there is ambient lighting with 15 color choices. People can decide which hue they'd like to use to set the right mood. The steering wheel is wrapped in leather and it has an R-Line badge with touch-sensitive controls.

There are a few other differences as well. The SE R-Line Black comes standard with a power panoramic sunroof, and it has park distance control. This program can provide drivers with useful information about how close they are to other objects when parking.

Compare the 2022 Tiguan SE R-Line Black vs SEL R-Line. What is the difference?

The SEL R-Line is distinctly more upscale than the others. It's only offered with all-wheel drive, and along with that type of drivetrain, it has Active Control. Active Control lets drivers choose from different modes. This results in optimal performance when the SUV is dealing with off-road trails or snowy conditions, for example.

The list of exterior upgrades on this trim is actually pretty extensive. It rides on 20-inch wheels, and it has silver roof rails. Since it's an R-Line model, it has special badging and exterior features, like the R-Line Black does. However, the SEL R-Line has enhanced intakes and bumpers in addition to the stylized grille, side sills, and lower cladding.

All trims have heated side mirrors, but the SEL R-Line gets to have a memory function built into those side mirrors. Its front grille is illuminated, so it has a nice soft glow at night. The liftgate on the SEL R-Line doesn't just have a remote system; it can be opened in a hands-free manner as well. When people are weighed down with bags and gear, this can be key.

The lighting on the SEL R-Line is enhanced, too. This trim has adaptive front lighting, so the lights can actually turn in the direction that the SUV is turning. They also have a corner-illuminating feature that can help drivers see better around curves.

It's important to point out that the SEL R-Line is only available with five seats. Unlike the other trims, it doesn't come with the third row. This may be a deal-breaker for some customers.

What the SEL R-Line does have are impressive interior features. Its power-adjustable driver's seat has the ability to remember three favorite positions. The front-passenger seat is power-adjustable as well. All seats are covered in leather, the front seats hare heated and ventilated, and the leather-wrapped steering wheel is heated.

While the SEL R-Line has the same size touchscreen as the SE R-Line Black, it has some notable upgrades. It comes with navigation and a Fender premium audio system. With navigation comes a digital cockpit pro. It's an enhanced version of the digital instrument display that can show turn-by-turn directions and is customizable.

From a safety perspective, both trims will prove to be great choices. The SEL R-Line does have some extra features, though. It has automatic high beams and an overhead view camera instead of just having a rear view camera. It also has dynamic road sign display to remind drivers of important things like speed limit and upcoming traffic patterns. Lastly, it has park assist, which is an amazing system that can control steering while the driver focuses on the pedals. When this is engaged, steering is precise, and the SUV can fit itself into a parallel or perpendicular parking spot.

It can be hard to decide which Tiguan would suit someone best. By a process of elimination, the SE and SEL R-Line would be the ones to consider. The SE R-Line Black doesn't quite have enough benefits to justify its price increase over the SE, and the S is a little basic with its manual liftgate, cloth seats, and smaller touchscreen.

The SE and SEL R-Line are separated by a significant price difference. If cost isn't too much of a consideration, the SEL R-Line would be a pleasure to drive. It has Active Control and standard all-wheel drive, both of which will result in better performance. Plus, its high-end components like navigation, heated and ventilated front seats, park assist, and exterior accents are going to make it feel very much like a luxury model.

If a tight budget needs to be adhered to, the SE would do perfectly fine. It treats people to a power liftgate, a larger touchscreen, and an optional panoramic moonroof. This trim recommended if anyone needs a third row of seats. The negative of getting the SEL R-Line is that it only has two rows of seats, and for some households, that just won't work.