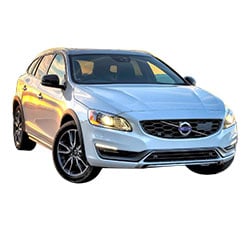 Should You Buy a 2016 Volvo V60? Here Are Some Reasons For and Against

Although a lot of today’s drivers have transitioned to a crossover SUV, the 2016 Volvo V60 proves that wagons are here to stay. Strapped with a super-efficient engine, the new Volvo “Sport Wagon” delivers outstanding versatility. For the drivers who are looking for a high-powered daily-driver, the new Polestar edition will certainly trigger an adrenaline rush. All versions of the 2016 Volvo V60 benefit from an excellent safety rating.

Although very few changes have been made, Volvo now offers a more stylish set of wheels for this wagon.

Several automotive critics have been extremely impressed with the V60’s base engine. The turbocharged 2.0-liter, four-cylinder engine produces 240 horsepower and 258 pound-feet of torque. This is more than enough power to make the ride exciting. In terms of gas mileage, drivers can look forward to getting 25 mpg in the city and 37 mpg on the open road.

Available on the T6 AWD R-Design model, the boosted six-cylinder engine is an outstanding power source. A turbocharged helps the 3.0-liter engine to pump out an engaging 325 horsepower and 354 pound-feet of torque. Drivers will love the engine’s outstanding amount of low-end torque. Despite the additional power, the sedan can still deliver about 27 mpg on the highway.

Although the Polestar edition uses the same six-cylinder engine, it has been tuned to pump out 345 horsepower. When tested by a professional driver, the Polestar edition raced to 60 mph in less than five seconds. To further enhance the car’s performance, it has also been fitted with a track-tuned suspension and a more powerful braking system.

While the base 2016 Volvo V60 comes standard with a FWD setup, some drivers may need to step up to the T6 AWD R-Design trim. When traveling in adverse weather, the AWD system's additional grip will certainly come in handy. Unlike some 4WD systems, the V60’s AWD system does not require the driver to flip a switch. They can just focus on the task of driving.

Even the standard trim is quite fun to drive. The wagon’s well-balanced handling makes it just as entertaining as a smaller car. However, the T6 AWD R-Design model and the Polestar edition mimic the driving dynamics of a pure sports car. When traveling around a twisting road, the 2016 Volvo V60 never loses its poise. A responsive steering system contributes to its performance.

While the 2016 Volvo V60 provides ample room for most families, it truly shines as a cargo hauler. Due to its fold-flat passenger seat, a variety of different items can be stored inside of the cabin. From surfboards to building supplies, the 2016 Volvo V60 can haul an enormous amount of stuff. A convenient grocery bag holder is also available.

This luxurious wagon comes standard with Volvo’s nifty Sensus Connect infotainment unit. Not only does the Sensus system feature a built-in USB hookup, but it also provides a Wi-Fi hot-spot. Meanwhile, the higher trims are available with a surround-sound audio system. Some of the other available high-tech features include navigation, adaptive headlights, and an innovative cabin filtration system.

With a starting price of $36,000, the base 2016 Volvo V60 proves to be a good bargain. Some of the standard features include heated mirrors, a sunroof, a quite impressive sound system, and the Sensus Connect infotainment system. The V60’s outstanding fuel economy and low-maintenance design make it a solid choice.

The 2016 Volvo V60 certainly has a special appearance. It is a very good choice for the drivers who want to stand apart from their neighbors. Featuring an aerodynamic body kit and 20-inch wheels, the Polestar edition is especially stylish. Some of the unique paint colors include Magic Blue, Flamenco Red, and Ice White.

While the FWD version is extremely easy on gas, the AWD models are not nearly as efficient. However, a 27-mpg highway fuel economy rating is not terrible for such a high-performance vehicle.

Due to the exciting performance of the T6 AWD R-Design model, some drivers may long for a manual gearbox. Unfortunately, they will have to make do with the six-speed automatic transmission.

The 2016 Volvo V60 only has a few direct competitors. While the BMW 328i xDrive is a great wagon, the Volvo V60 offers a lifetime warranty on all repairs. This will help the owners to save a boatload of money in the long run. Meanwhile, the rugged Audi Allroad cannot match the Volvo V60’s precise handling.

There are plenty of car shoppers who will find the 2016 Volvo V60 to be very tempting. Although it is not as popular as a traditional family sedan, the V60 is still an outstanding automobile. When equipped with the racy six-cylinder engine, the V60 becomes a spectacular driving machine. However, the base engine is a great performer in its own right.
View MSRP VS Dealer Invoice VS True Dealer Cost Pricing:
▷ 2016 Volvo V60 prices
2016 Volvo Buying Guides: