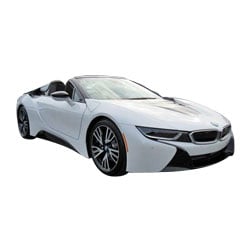 In just about all ways, the 2020 BMW i8 is a genuine supercar. It has futuristic styling that draws heads from all the way down the street, and its flip-up doors offer an outrageous way to announce your arrival to everyone within sight. Plus, the i8 gets everything that BMW has ever made with performance in mind, packaging the contents into a carbon-composite frame that slings low. On top of that, it's even eco-friendly, focusing on minimizing one's footprint.

Underneath the hood, you'll find a plugin hybrid powertrain capable of providing a generous fuel economy as well as strong performance. The three-cylinder 1.5L turbo engine can generate 236 pound-feet of torque and 228 horsepower, sending the power to the rear wheels. The electric motor peaks at 184 pound-feet of torque and 141 horses, transmitting that power to the front wheels. Together, the whole setup generates 369 hp to all wheels.

An 11.6-kWh battery powers the motor, which lets the 2020 BMW i8 reach 18 miles purely with electric energy. However, the battery mostly bridges the gaps in torque that happen as a result of having a small engine. It also helps with the traction going around city corners.

You can get this year's i8 in two body style choices: either a 2+2 coupe or the new convertible with a soft top. The rear seats of the coupe are unsurprisingly small, making them better for child passengers. The convertible gets rid of the rear seats and relies on the power to fold the top in roughly 15 seconds. That number works out even while you're driving at neighborhood speeds.

Of course, the i8 isn't perfect. Supercars are known for their superior performance and their outlandish styles, but "superior" isn't quite the word to describe how to i8 drives. It tops out at 155 miles per hour and takes 4.2 seconds to reach 60 miles per hour from a standstill. The numbers are fun, but they're worse compared to competitors. Likewise, the handling falls a little short for its class.

If performance numbers are the only thing that matter to you, then you will not find solace in the 2020 BMW i8. Instead, it becomes more a showcase for technology, proving that one need not rely on gasoline to get strong power out the gate.

After you decide whether you want to haul around a pair of tiny passengers or allow for a topless drive in the new convertible body, there isn't much room for customization. If nothing else, it's worth thinking about the laser headlights for the sake of bragging rights.

Underneath the hood of the 2020 BMW i8 are a 1.5L three-cylinder turbo engine, an electric motor, and a six-speed auto. The standard features include keyless ignition and entry, driver-seat memory functions, LED exterior lights, leather upholstery, dual-zone auto climate control, and 20-inch alloy wheels.

You'll also gain access to a heads-up display, a Harman Kardon sound system, an 8.8-inch display screen with the iDrive infotainment system, and smartphone integration via subscription-based Apple CarPlay. You get a year of CarPlay for free before you have to pay for the subscription.

The Tera World package is an optional add-on that gets you a few extra niceties. For example, there's exclusive leather and cloth upholstery as well as unique interior trim. Plus, you'll get the laser headlights that are sure to impress.

As mentioned above, it takes 4.5 seconds to reach 60 miles per hour with the 2020 BMW i8 coupe, which actually isn't the best for its type in this price range. The steering isn't the best on the market either, because it lacks physical feedback. It doesn't detract from how fun the BMW is to drive, of course, but it's an obvious concern.

Even if you're driving in EV Mode, the i8 does not have the quietest drive on the road; the motors whine. When using the gas engine, it sounds sportier. The addition of the adjustable suspension makes the ride more comfortable, even if you hit a bump every now and then.

Inside, the i8 has upward-opening doors, steep roof pillars, and large doorsills that all result in a cabin that's hard to get in and out of. The seating position is precisely what you would expect, though. Again, the rear seats are not meant for adult passengers, unless they're particularly petite.

Likewise, the rear cargo area has little volume to it, but there are enough cubes to be functional. It's possible to store flat laptop bags and smaller duffel bags in the trunk. The backseat is also a sort of shelf for the coupe since it's not large enough to comfortably seat passengers. The convertible lacks the cargo space since it needs the room to accommodate the folding roof.

Finally, you'll have access to the newest iDrive system by BMW. However, there are several safety aids found on other BMW models that aren't on the i8, like adaptive cruise control and lane keeping assist.

How to Calculate The Dealer Cost of a BMW i8:

Note: All BMW i8 MSRP, invoice and dealer cost dollar figures above are approximate amounts. Prices are subject to change without notice.